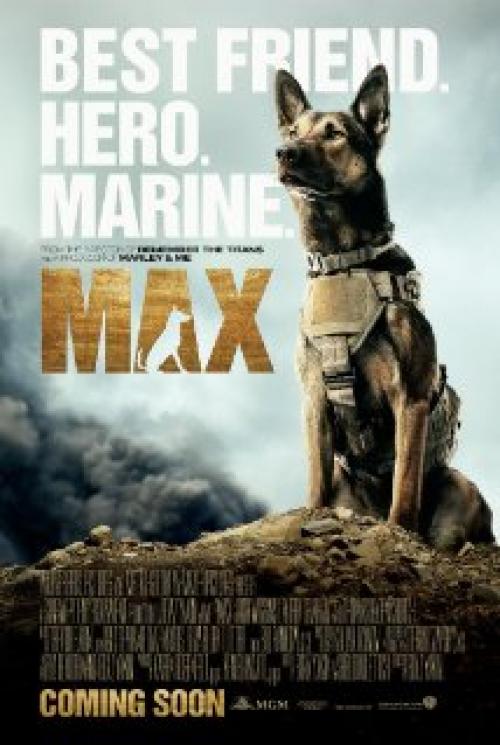 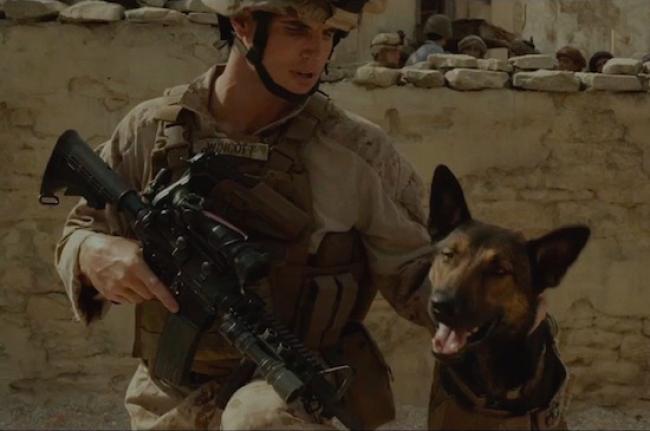 Robbie Amell and Carlos in Max

Hollywood has long featured man’s best friend in many of its films. They have often involved a lonely boy and have a standard plot of a canine helping to mature him in some way. Max follows the tradition but by no means improves on it.

It begins with an action scene in Afghanistan where we meet Max, a Belgian Shepherd, and his handler Kyle, a United States Marine. We then meet Kyle’s stateside family. His parents and younger brother, Justin, live in Texas, although it was filmed in North Carolina. Mom makes dinner, Dad carries a gun and Justin broods when not illegally down loading games he then sells.

As shown in the previews, Kyle is killed in action and Max finds himself living with Justin. The scene of Kyle’s funeral is one of the film’s most emotional. In the middle of the church service, two marines bring Max in who is fighting to get to his handler he knows is in the casket. Max runs to the coffin and then lies quietly underneath it. I have read of such things actually happening and was moved by the moment.

Unfortunately, the rest of the film never again reaches that emotional crescendo. Max is suffering from PTSD, and only allows Justin to be near him, at first. Justin meets and falls for his best friend’s cousin, Carmen. She just happens to know how to train dogs and Max takes to her as fast as Justin.

Problems arrive in the form of Kyle’s questionable best friend and army buddy. Having just been discharged from the military, he gets hired by Justin and Kyle’s father to work at his storage facility. Justin also has problems with a criminal he sells his illegal games to. But hey, Justin has a trained, battle hardened dog on his side.

Max is meant to pull at your heart strings and if you are an animal lover, it may succeed. My wife and I have owned a dozen pets in our lives so you would think we would easily be drawn in but we were not. The story feels forced and is riddled with flaws. I was a bit put off by the racism in the film. Justin’s best friend is of Mexican descent, as is his cousin, and they often refer to skin color for some reason. Carmen even calls Justin a, “white boy” at one point. According to my calendar, it is 2015. Is race baiting really an issue with thirteen year olds?

The story tries for some action scenes but they never ring true. When Justin gets in deep with some real criminals, all he has to do is tell his parents but he decides to stay silent even when his father has a heart to heart with him. Writer/director Boaz Yakin really dropped the ball when Justin’s father shoots out the front tire of the baddies truck and then puts several bullets into the engine to disable it. However, moments later the criminals are shown driving it in pursuit of Justin and Max with four fully inflated tires.

The film could have worked had it stayed more as a family drama and left much of the criminal activity out. Justin should have been depicted more as a loner and in need of a four legged friend. As he already has a best friend and a possible girlfriend, he really has little time for a dog. His jealousy over his brother should have been better explored as should his issues with his father.

Max’s heart is in the right place and it drips with Americana and patriotism. Part of the movie takes place on the Fourth of July. You could grow weary from counting all the red white and blue on display. It works best as a tribute to all the dogs who have served the United States military over the decades. I would rather have seen a movie about Max's time spent with Kyle than with Justin.