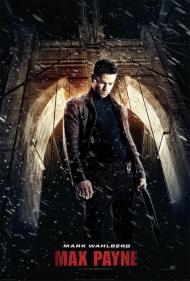 Another movie based on a video game and another trip to the theater with little expectation. That may have worked in the movie’s favor as the history of games being turned into movies is not worth bragging about. Max Payne, based on the violent video game, is a decent, if not overly exciting, modern film noir.

Payne is a detective who has been reduced to working cold cases in a lonely, dreary office. In fact, the whole movie is filmed in shades of gray and blue, with only an occasional burst of color, such as a woman’s red dress in one pivotal scene. Payne’s wife and child were murdered and he is now secretly still hunting for the culprit in his off time. The plot gets interesting, although predictable, when a recent murder is connected to his wife’s death.

Mark Wahlberg has grown as an actor and this is his best type of character. Like in The Departed, he is best when playing a frustrated tough guy. Something About Charlie proved romantic charm is something he needs to work on, but a gun toting, vindictive cop fits him comfortably.

There was more than one blog written about the casting choice of Mila Kunis as Mona. Some fans of the game objected to the star of a sitcom playing an action heroine. Her screen time is quite minimal and I wonder if she lost some scenes to the cutting room floor in response to the negative blogs. In my humble opinion, she does alright, and would have liked to have seen more of her.

Max Payne delivers the goods in the action department. It is nothing real special, but it is enough to keep you watching. As in so many video game inspired movies, Max Payne suffers from lack of personality. His only character trait is his need for revenge. The movie has a scene after the credits that hints at a sequel, if the movie makes enough money to inspire one. It could only work if they can develop this character now that his reason for living has been resolved. 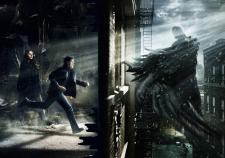 I've certainly seen worse adaptations, but having played the game and watched the movie, I can say that the game elicited more emotion and that can't be a good thing.

The game featured an exaggerated film noir visual style, but was equally inspired by director John Woo and his slow motion, balletic action scenes. It featured what is called bullet-time, which gave the player the ability to slow down the action and move in slow-motion. It was this combination of melo-drama and slow-motion that gave the game its uniqueness. The movie does capture some of the look and feel of the game, but never draws you in emotionally the way the game did.

Wahlberg does an okay job as Payne, but then he's never asked to do too much as an actor. I'm one of the people who think Mila is miscast as Mona. I didn't buy her as the tough chick.

The movie does throw in some nice references to the game (the Roscoe Street Subway Station will be recognized by anyone who played it) and the plot to the movie is close enough to the plot of the game to be recognizable.

I think the real problem with video game to movie adaptations is that Hollywood does treat them seriously enough and so they end up being made by b-list actors and crew and also that games just don't easily translate to the big screen and maybe Hollywood should just wake up to the fact that they're never going to.