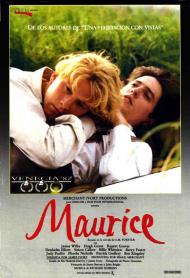 Maurice (pronounced Morris) is a lush Merchant/Ivory production of E.M. Forster’s highly personal, and banned for many years, novel. This film played a pivotal role in my coming of age as a gay man. It was the first gay themed movie I ever saw in theaters. I was 20 years old and had just moved into my first apartment. To this day it remains that rare movie with a happy romantic ending between two men.

Set in pre-WWI England it tells the story of two school chums at Cambridge that begin a romantic, though platonic, relationship. After a fellow classmate is caught in a compromising position with another man and sentenced to a prison term at hard labor, one of them gives in to the social restrictions of the day and marries. The other eventually finds happiness in the arms of a handsome, yet uneducated, games keeper.

James Wilby plays the eponymous Maurice, who, over the course of several years between 1909 and 1913, comes to terms with his repressed homosexuality, discovers the joys of sex and falls in love. A young Hugh Grant plays Clive Durham. At the beginning of his relationship with Maurice he is more aggressive and radical minded. Over time it becomes clear however that Clive is the more conformist of the two, forsaking their love for his position in society.

After Clive’s marriage, Maurice begins seeing a hypnotist in the hopes of “curing” his homosexuality. Ben Kingsley plays this small but pivotal role. When it becomes clear that Maurice isn’t going to magically change his sexual orientation he advises him to move to a country that no longer criminalizes being gay such as France or Italy. Maurice asks him if he thinks that will ever happen in England. The hypnotist then gets the movies’ best line when he replies, “England has always been disinclined to accept human nature.”

Enter Scudder (played by the sexy Rupert Graves), the handsome games keeper at Clive’s country estate. As a member of the lower classes he isn’t bothered by the same social mores that pressure Clive and Maurice. He gives the repressed Maurice his first taste of physical passion along with the courage to be himself despite what it will cost him.

Like all Merchant/Ivory productions Maurice is beautifully shot and methodically paced. You have to watch this movie with patience to fully appreciate it. The dialogue is very upper-class British in style and filled with intellectual references.

Maurice was groundbreaking in the handling of its once taboo subject matter. It proved a movie could be explicit in its depiction of same sex love while remaining tasteful and highly romantic. The final scene between Maurice and Scudder at the boat house features the most passionate kiss between two men in cinema history.

Explicit love scenes between men featuring full frontal nudity were extremely rare in those days. As you might expect my young mind was blown away. I vividly recall the immense feeling of validation it gave me. I walked out of Le Bijou Theater in Kalamazoo, Michigan that autumn evening in 1987, with my head held a bit higher than when I walked in. 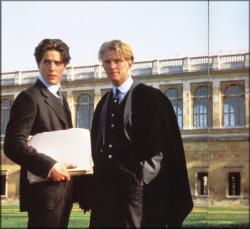 I recall Patrick showing me this movie on video at his apartment. I slept through some of it, as the plot has a fondness for lingering. However, I saw enough that I exclaimed that it was a coming out movie. Patrick saw this as a life affirming film and I understand why he would feel that way. For me, it was a glimpse inside a secret world of forbidden love.

Conforming to societal and familial expectations could be considered the very description of an orderly civilization. Wild may a world be where men pursue whatever pleasure and whim that strikes them. Rules, laws and morality can define a civilization. They make the bourgeois feel safe and aid the wealthy in controlling the masses. Those very restrictions however, often repress human nature. What is a man to do when the world in which he lives tells him to lead a life based on their acceptable standards and not on the desires he feels growing deep within his soul?

This is the struggle that Maurice and Clive find themselves in. They live in a time and place where homosexuality is shunned as well as illegal. To act on their desires is to bring shame to themselves and families. They must choose between a happy, yet damning, life and an acceptable existence that denies their true nature.

They each take a different path and find varying degrees of satisfaction. Clive plays at being a husband with a seemingly bright future creating offspring with his wife. Maurice spends some time trying to correct his malignant sexual desires until Scudder finally shows him a way to release his long pent up sexual frustrations.

Maurice is an intimate film about a gay man finding love against all odds and likelihood. It also speaks volumes on how forbidden love and pleasurable desires are the greatest threat to any restrictive society.