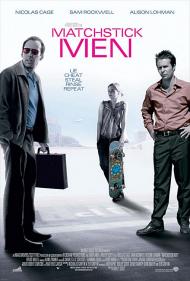 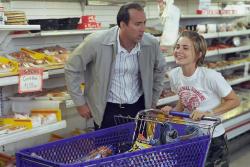 Matchstick Men is an entertaining movie that contains some great acting by its lead (Nicolas Cage) as well as by the supporting cast. The film weaves several seemingly disparate plot threads together into one satisfying story. Unfortunately, its ending is somewhat predictable and portions of the movie require major suspension of disbelief.

Roy Waller (Cage), as you probably know if you've seen any of the previews to this movie, is a neurotic con artist with a host of phobias and body tics. In the hands of a less skilled actor, Roy might have been reduced to the sum of his neuroses, but with Cage, his neuroses are merely a part of a fully fleshed character. The tics and the stammering are the showy part of his performance, but its what's going on behind his eyes and in his line delivery that commands your attention and makes you care about him. Cage's performance carries the movie above some of its faults.

When Roy needs to find a new supplier for the pills he takes to control his tics, his partner in crime, Frank (Sam Rockwell), recommends a psychiatrist. Unfortunately for Roy, his new doctor won't merely rubber stamp a prescription, but wants him to actually talk. The therapy sessions soon prompt Roy to reveal that he used to be married and might be a father.

When, with the help of his psychiatrist, Roy is reunited with his 14-year-old daughter Angela (Alison Lohman), he seems to find a new purpose in life. He agrees to try a larger than normal con that Frank has devised, even as he builds a relationship with his daughter.

Cage and Lohman have great chemistry as father and daughter. The scenes with just the two of them are the strongest in the film and the most enjoyable. He teaches her how to pull a con and she gives him a connection with the world outside his compulsively clean, and orderly home.

Like many movies involving con artists, Matchstick Men's con depends upon things that in real life would be completely undependable. Without revealing too much of the plot, I can only say that if any of the characters behaved in a way not anticipated by the con, it would not work. This is particularly true of the movie's final and supposedly surprising twist, which isn't really surprising at all. This final con is the movie's weakest point.

Thankfully though, the cast, along with some sharp and witty dialogue, more than make up for the plot's weaker points and keep the movie entertaining. And although the ending feels a little too contrived and happy, with just one too many life lessons learned, the ride to that end is satisfying enough that it doesn't really matter.