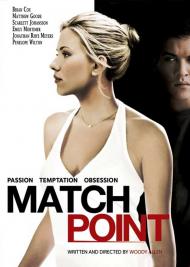 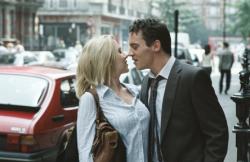 Anyone going into Match Point expecting a typical Woody Allen movie will be sorely disappointed. Anyone expecting a fantastic story with a stellar cast and a knockout ending however, will be thrilled. This is the only Allen film I've ever seen that isn't instantly recognizable as his, but beyond that, it's also a great movie.

Set in London, it tells the story of Chris Wilton (Rhys-Meyers, who's probably best known as the Coach in Bend it Like Beckham), a former tennis pro from a working class background, who becomes involved with the very wealthy Hewett family. He becomes friends with the son, Tom, and begins dating the daughter, Chloe. When it becomes serious with Chloe, her father finds him a job with the family firm. Everything seems to be coming together for Chris, but he falls in lust with Tom's American fiancée (Johansson) and endangers his potential for a rich and successful life by beginning an affair with her. An affair that can obviously only end badly.

The story is reminiscent of 1951's A Place in the Sun starring Montgomery Clift and Elizabeth Taylor. And like that earlier movie this one is clearly a tragedy. There are important differences in the plot, particularly in the ending, but anyone familiar with both movies will see parallels.

One of the brilliant moves by Allen, who as usual also wrote the screenplay, is to make the protagonist of the movie the villain of the piece. Chris is obviously a social climber who loves his new found wealth much more than his wife. He cheats, he lies and he uses the people around him for his own advantage and yet sometimes you can't help but root for him, even when he's doing the most despicable things.

Rhys-Meyers, who might be the first male lead in an Allen film who isn't a surrogate Woody, does a great job as Chris. This could be the role that bumps him into stardom. Johansson and Mortimer are also quite good, with Johansson getting the much showier part, but this is really a one-man show for Rhys-Meyers, with every other character orbiting him.

There's also more sex than is usual in an Allen film. Rhys-Meyers and Johansson steam up the screen together in several scenes, beginning with their passionate encounter during a thunderstorm.

The movie opens with a voice over by Chris in which he describes the importance of luck, using the analogy of a tennis ball hitting the tape on top of the net. Sometimes the ball goes forward and sometimes back, depending upon your luck. For this movie there can be no doubt which side of the net the ball landed on. Game, set and match to Woody Allen. 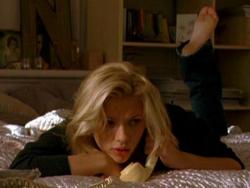 Match Point is Woody Allen's best movie in years. For decades critics have bemoaned the fact that Woody no longer made comedies like his “early funny films". It's a bit ironic then that in the last few years his attempts at pure comedy have all fallen flat and it is only with last year's Melinda & Melinda which, though it featured both a comic and tragic take on the same story worked better as a drama, and now with the nearly laugh-free Match Point he appears to be back on track as a filmmaker.

Once again, Allen has wisely chosen not to appear in the movie. Although in this case the plot and setting pretty much made that decision for him. Other than a cameo it would have made no sense for him to play a character here. The only memorable performance he has given this decade was as Jason Biggs' paranoid older friend David Dobel in the not so great Anything Else.

In Allen's recent movies the dialogue has sounded stilted and forced coming from the young actors mouths. Most twenty-somethings don't talk about Freud or Russian literature. Perhaps the fact that this movie features wealthy young Brit's rather than Americans allows the 70 year old writer/director's words to sound more natural.

Jonathan Rhys-Meyers gives a star making turn. As Scott mentioned Chris Wilton is definitely an updated version of Montgomery Clift's George Eastman from A Place in the Sun. Both are handsome, likable young guys looking to advance in life. Both have religious parents (a detail that Allen throws in for no other apparent reason than to echo Sun) and both have a dormant sinister side. The difference lies in the ending.

Kudos to Woody Allen. The talented and prolific legendary New York Filmmaker seems to have found fresh inspiration across the pond. With any luck he will keep putting out movies of this caliber for years to come. 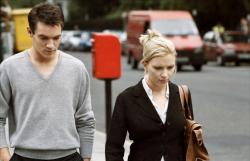 Match Point is my favorite of Allen's dramas. Most notably because you never see any of Allen's traits in it. Okay, he does open the movie with a voice over, a common Allen device, but it is in the accented voice of Rhys-Meyers.

The best aspect of Match Point, and where it stands out from so many films out today, is that the characters are all so very real, or flawed to be more exact. Sure, Chris is the protagonist and the antagonist, but everyone around him is hardly innocent. Nola chooses to have an affair with a married man that can only end badly, much like she continued to choose to try to be an actress when she never got any jobs acting. Chloe chose to push her husband into a job and to have a child when he obviously had no real enthusiasm either way.

The Hewett parents are blind as well. They are snobbish to Nola when it is their own son who has an affair on her. They want grandchildren so they get excited when Chloe insists they are trying to conceive. They think highly of Chris but are blind to his indifference toward their daughter, having a child and his work. They see what they want to see.

Chris is a flawed character who does not have the balls to stand up to the people around him. Unlike Scott I did not root for him. By the end of the movie he is wondering how he ever got himself into a hole that he himself dug. The one time he finds the guts to do something completely on his own he makes the worst possible decision. Chris is a very weak protagonist that I could not possibly root for him, as Scott wrote. He makes a much better antagonist. There is the area where he makes his choices alone.

No one character in Match Point is worth rooting for and in that is the weakness of the film. It is intriguing to watch because you do not know how it will be resolved but then when it is, you are really only left with a feeling of pity.