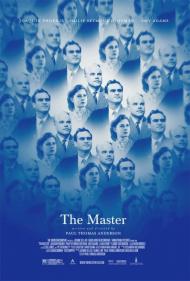 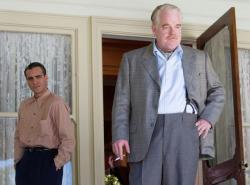 The Master is the latest film from writer/director (and critic's darling) Paul Thomas Anderson. This is his first movie since There Will Be Blood in 2007. It tells the story of the relationship between two men in the early 1950s. Philip Seymour Hoffman plays Lancaster Dodd, an L. Ron Hubbard type guru in the early stages of developing his own quasi religion/philosophy (think Scientology). Joaquin Phoenix is Freddie Quell, an itinerant alcoholic and ex-sailor who served in WWII.

Anderson seems to favor stories that feature vile and/or violent protagonists. This movie is no exception. Freddie Quell is a hopeless drunk. He doesn't give a shit about anyone but himself. He is also quick to anger and prone to violent outbursts. This makes him the perfect test case for Dodd (or the Master as he is called by his acolytes) who the movie clearly paints as a charlatan.

Through intense therapy sessions designed to help people recall events from their previous lives, which the Master calls “processing”, he hopes to enable people to rediscover their true perfect selves (or some such gobbledegook).

In Quell, the Master sees the perfect guinea pig. He's not very bright, but he is loyal and malleable (up to a point anyway). Quell sticks around for the free room and board as well as the excitement of being part of something larger than himself. Although you never get the feeling he truly buys the Master's teachings.

Amy Adams plays the dutiful but outspoken wife of the Master. She is skeptical about Quell's motivations right from the start but remains loyal to her husband's vision of trying to help this troubled man. Her role is definitely in support of the two men who dominate the movie.

The therapy sessions involve several different mental/emotional exercises. In one the Master has Quell walk back and forth between a wall at one end of a room and a window at the other end of the room. With his eyes closed Quell must describe what he feels each time he touches the wall or the window pane. This goes on for hours while the Master and a group of his sycophants look on. In another session Quell and the Master's son-in-law must sit face to face while taking turns insulting each other. Neither man is allowed any physical, emotional or verbal reaction to whatever the other man says.

Much has been mentioned in press releases for The Master that it was shot on 70mm film. To my less than expertly trained eye there was no noticeable difference in the picture quality. Although it does feature a few beautifully shot scenes (including one in the desert) the cinematography is nowhere near as memorable as the Oscar winning work on There Will Be Blood.

Paul Thomas Anderson is a very talented filmmaker with a singular vision. He writes vivid characters that linger in your memory long after his movies end. The Master, however, is ultimately disappointing. It is beautifully wrought and features two of the finest performances of the year but in the end it feels empty and dissatisfying. 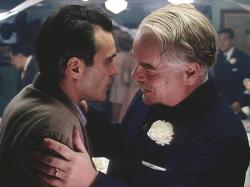 The Master is about a charlatan with a following, most of whom accept everything he produces without question. I couldn't help but be reminded of Paul Thomas Anderson and the legion of critics who seem to automatically proclaim anything he produces as art. Every time I see one of his movies I wonder what the reaction would be, if some unknown director had made it.

Visually, Anderson has a good eye. Like Patrick, I can't say that the 70mm really impressed me, but there are many shots that look good. He makes particular good use of space, from interiors to wide open vistas.

He also tends to get good performances from his cast. As Patrick wrote, the very best thing about this movie is the acting from Hoffman and Phoenix. They make an interesting, if not likable pair. Phoenix buries himself in his part, twisting himself physically and emotionally. For sheer acting's sake, it's definitely one of the greatest performances of the year. Their many scenes together are the film's highlight, although I found their final moment, when Hoffman sings to Phoenix to be cringe inducing rather than emotionally moving.

Storywise though, the film is severely lacking. I just watched this movie and I honestly have no idea what the point of it all was. Now, I'm sure someone will say that's my problem or even say that I'm being ignorant, but here's my point. I was so bored by this movie and so disliked the characters, that to expend even the slightest effort more than necessary to decipher whatever cryptic point Anderson was trying to make is a complete anathema to me.

I once read, I forget where, but probably in the New York Times, that Anderson doesn't make movies for lazy movie watchers. Okay, so he tries to make works of art. That's fine. I get that. I've also read some critics who've said that to fully understand The Master, you need to watch it more than once. My point is that there's nothing to indicate to me that there's any great reward to be found at the center of this movie that warrants further analysis. If someone who disagrees with me wants to see that as a flaw in my character, they can feel free. Life's too short to waste it mulling over the homoerotic/Freudian underpinnings of the relationship between Phoenix's Freddie and Hoffman's Dodd (a name so close to Dad, it's almost laughable), two characters I have no desire to spend anymore time with than I have to. 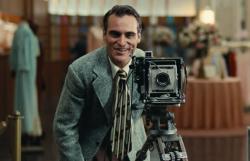 Joaquin Phoenix in The Master

If a film needs interpretation, is it a work of art or a piece of shit? Is causing the viewer to decipher what they just saw a sign of the filmmaker's genius or a flaw in his story telling? The Master has received all kinds of flourishing compliments by critics and bloggers, with each stating it means something unique to them. If a film's message confuses its audience then how do we ever know if the film maker succeeded? If you want to argue that his effort was to confuse then you have just excused every horrible film maker.

With that said, here is merely another opinion. The film opens with the shot of a wake from a ship. The shot is returned to several times in the film. We do not know if it is from the ship he was stationed on in the Navy or from the one owned by Dodd. We then discover two issues about Quell. The first is that he is an alcoholic, making it out of anything he can find including paint thinner. The second is that he is sexually frustrated as depicted with the sand woman and the lack of success with the woman in the store.

After some wandering, Quell finds himself on a boat having therapy sessions with Dodd. I believe this is all a part of his imagination. Quell has Post Traumatic Stress Disorder. His actions at the store show he has issues. His mind keeps himself on a boat as that was the last stable place he experienced. We see Quell sneak aboard the ship and then the next time we see him he is laying down. A woman wakes him and ushers him into Dodd's office, just as a nurse would take a patient into an appointment.

What follows are many different therapy sessions between Quell and Dodd. We learn of his sexual experience with his aunt. He admits the incestuous relationship easier than he does to admitting to killing someone, even though he was just in a war. Quell tells of his love for a 16 year old girl whom he is only shown kissing. He left her for a job.

All of this self reflection has a clear affect on Quell but part of him still wants to question the therapy. Through the man at the party we have Quell questioning Dodd's methods by pointing out facts that contradict Dodd's opinions spoken as facts. The scene ends with Dodd off screen saying to a laughing Quell, "Freddie, stop. This is not the time." Quell then goes and beats the "man" up, or struggles with his own guilt.

When he yells at Val to, "Be a man!" He is yelling at himself. The arrest and hissy fit in the jail is his struggle to break away form his addiction. The conversation they have in the jail cells is more fitting for a therapy session than a prison. "You lazy ass piece of shit!" Dodd yells at Quell. "Who likes you except for me?" He continues, "You fucking drunk and I am done with you."

Beyond the beginning and ending, every thing we see is just symbolism of his therapy. The scene where they roll around on the grass laughing is a break through in his therapy. Quell is never again shown drinking alcohol. The scene of him walking back and forth in the room is just another symbolic gesture of his back and forth struggle to grasp reality.

We have brief flashbacks to him in the service and the sand woman. Quell and Dodd go into the desert and dig up a chest he calls his "life's worth." It is a manuscript written by Dodd. Quell then hands out pamphlets on the street saying, "Free yourself from past trauma." Quell starts to dress better and even takes photos of Dodd for his new book Dodd calls, "Book two." As in the next part or a second chance. This is all just visualized descriptions of Quell's healing process.

The ride on the motorcycle is Quell leaving therapy. He goes to look up Doris but finds that life has moved on while he was away. If you still think this story is literal and not all in Quell's imagination, look no further than the scene where Dodd calls Quell in the movie theater and Quell goes to visit him in England where Quell gets laid. During the sex he asks the girl some of the questions he was asked by Dodd. We then are shown him laying contently next to that sand woman. Quell is now healthy.

Everything but the beginning and ending of this film was in Quell's head as he went through therapy for Post Traumatic Stress Disorder. No wait, I have another theory. Maybe he was dead and this was all purgatory awaiting for God (Dodd) to decide if he was worthy of entering heaven as shown at the end by the sex. Another theory could be that Quell dreamed all of this and he is actually still in the war.

Yet another theory could be be that Paul Thomas Anderson is just a shitty film maker who has no fucking clue how to translate a story from his brain to an audience. Yeah, maybe that thought is the most accurate. After all, if a film does not tell a cohesive story and the point is intended to be left open for interpretation then why even make the film?