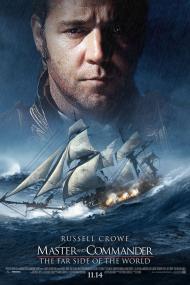 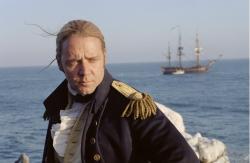 When a movie generates Oscar buzz even before it is released or reviewed, and quite possibly before it was even shot, I must admit that I go to watch that movie with some skepticism. As I did upon seeing Master and Commander: The Far Side of the World, which is a movie generating just that kind of early buzz. By the time I had left the theater, my skepticism was still intact, for while the movie is well filmed and features some great naval battle scenes, I would hardly consider it Oscar worthy. But then, I never understood why Gladiator, Russell Crowe's other historical epic, was given so many Oscars either.

The film is based upon a highly successful series of books by Patrick O'Brian, which the New York Times has called "the best historical novels ever written." Not having read the books, I cannot compare the two or testify to the truthfulness of that statement, except that I am assuming the books contained a great deal more of the nitty-gritty details of life aboard an English Naval ship in 1805. Regardless of what or how the story was adapted from book to screen, the end result, at least to someone who never read the books, is an entertaining one.

Russell Crowe plays Lucky Jack Aubrey, captain of the HMS Surprise, an aging English Frigate. His orders are to intercept the French ship Acheron off the coast of Brazil, and to either sink, burn or take her as a prize. A task that he sets to with enthusiasm, and one that comprises most of the plot as the Surprise and the Acheron play a cat and mouse game of hide and seek from the Atlantic to the Galapagos islands.

Along the way the Surprise and her crew battle not only the French ship, but the weather and the clash of personalities that come from having 197 men living on top of each other in cramped quarters. It all adds up to some rip-roaring adventure upon the high seas.

Despite the colorful collection of crewmembers, including Paul Bettany as the ship's surgeon (a combination of Spock and McCoy to Crowe's Kirk), Crowe dominates the movie in the same way that Aubrey dominates the ship, using his boisterous charisma to good effect.

The battle scenes are violent and bloody, but not gratuitously. Cannons blast away as the two ships sail past each other, ripping holes in both ship and sailor alike. Although the manmade destruction almost pales in comparison to the destruction nature throws at the ship as it passes around Cape Horn. Both types of action are filmed so well you can almost feel the ocean spray on your face.

By attempting to generate so much Oscar buzz, this movie may have done itself a disservice. Because of the advance buzz, I went into this movie expecting more drama, when really this is an old-fashioned adventure story told with today's modern special effects. The result is an entertaining one that should please audiences and critics alike. Why shoot any higher than that? 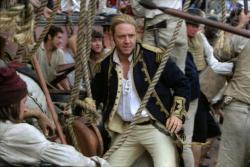 As Scott wrote, the drama is just not here. Sure, there are battles and death, but never do you have that moment where you truly see some passion come out of any character. Perhaps that is how the books are written? Perhaps it is a British thing, that they rarely show emotions? Sure, we see some sadness and some joy, but never is it displayed well enough for the audience to feel engaged.

Historically, this is a fun movie to look at. I watched it with my sons who were fascinated by how they slept in hammocks, and how the boy officers were in charge of the men of the crew.

The movie attempts some levity. The jokes are weak and even less effective than the drama. Aubrey tells a joke about a Weevil that is made to be hysterical. The officers all laugh at it, but it is truly not a funny joke. The punchline is "...choose the lesser of two weevils." My favorite joke in the movie is a toast given by Aubrey. "To wives and sweethearts. May they never meet."

Historically this movie is very fascinating. Adventure wise this movie is riveting. However, the characters are all distant and cold. Sure, I rooted for the HMS Surprise to defeat the Acheron, but never was I emotionally attached to anyone involved. Had the ship just turned around and gone back to England, I would not have felt any less for any one. Their motives for doing anything were moot. 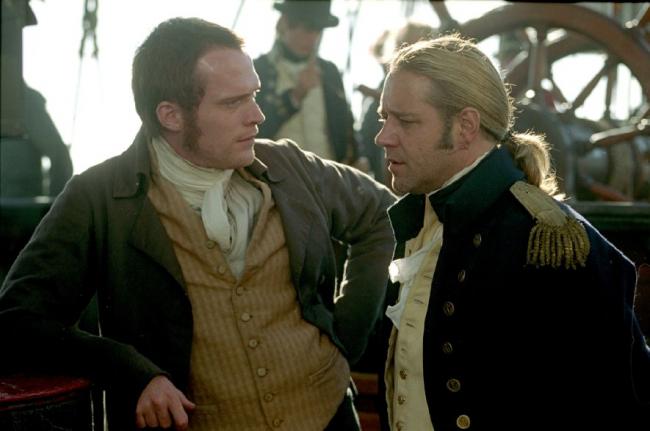 Paul Bettany and Russell Crowe in Master and Commander: The Far Side of the World.

Master and Commander: The Far Side of the World was nominated for an impressive 10 Oscars, but it went home with only two; for Best Cinematography and Best Sound Editing. It certainly looks and sounds amazing so I think the Academy got it right. Although I thoroughly enjoyed this movie I agree with Scott that it didn't deserve to win Best Picture (this was the year of Return of the King). And the fact that it didn't receive a single acting nomination was likewise fitting since this isn't really an actor's picture. It's all about the adventure.

In that sense this is an old-fashioned cinematic yarn set at sea. Except director Peter Weir achieved a level of realness far beyond anything in those old Errol Flynn swashbucklers. Although much of the movie was shot in a water tank (the same one used in Titanic) they did spend 10 days filming at sea. During which time everybody in the cast (with the exception of Paul Bettany, who had been a sea cadet as a boy) got seasick. At any rate it gives the movie an authenticity rarely attained by a Hollywood production.

Two things they changed in the adaptation from page to screen are the year in which it's set and the nationality of the enemy ship. In the novel the year is 1812, not 1805, and the ship the HMS Surprise is pursuing is an American vessel. Naturally enough the money people didn't want to alienate American audiences so they changed it to a French enemy. This was also the first major movie production to be allowed to film on the Galapagos Islands.

Eric, the joke you disliked isn't as bad as you make it sound, at least in the context of the scene. These officers are having port with their dinner. It's only natural they'd be in a jovial mood. Plus it never hurts to laugh at the Captain's jokes. The other line you liked wasn't written for the movie at all. The toast Aubrey gives is actually the traditional toast for Saturdays in the Royal Navy.

Master and Commander is a sweeping epic adventure flick that was made with meticulous attention to historical detail. It was supposed to be the first movie in a series but it didn't earn enough of the green stuff to justify a sequel. As recently as 2010 Russell Crowe was still hoping one would be made, urging fans via Twitter to contact Tom Rothman at Fox in regards to one.

Unlike my brothers I thought Master and Commander: The Far Side of the World had plenty of drama to go along with all the rip-roaring action. I was thoroughly invested in these characters and whether or not they were going to defeat the Acheron. In fact I'm sorry I waited a dozen years to watch this movie and I'd certainly pay to see a sequel. Unfortunately, I think that ship has long since sailed.