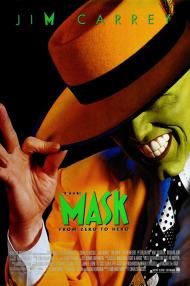 Jim Carrey in The Mask.

The Mask is a showcase of Jim Carrey's amazing comic talent. He alone raises this movie to heights it truly does not deserve to reach. The story is childish and often, however intentionally, comes across as very cartoonish.

The plot is secondary. The best this movie has to offer is Carrey spouting one-liners after another. "Kiss me, my dear, and I will reveal my croissant. I will spread your pate. I will dip my ladle in your vichyssoise." and "No! It wasn't me! It was the One-Armed Man!" are a couple of my favorites. The Mask also introduced such catchphrases as, "Ssssssmokin!" and "Somebody stop me."

Jim Carrey has gone on to grow his acting muscles but here is where his roots are buried. His comic flare and exaggerated antics gave him a manic reputation that is still with him today. Although this is plainly Jim Carrey's movie it is definitely worth noting that this is Cameron Diaz's film debut. Carey is a ball of energy who literally bounces off the walls but Diaz holds her own as the very sexy night club singer.

The Mask is a fun film to watch in the same mode as The Three Stooges. It is silly, childish and full of physical humor. I dare anyone to watch it without catching themselves repeating a line from this movie. "It's party time. P, A, R, T. Why? Because I gotta!"