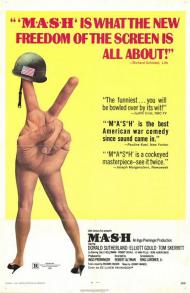 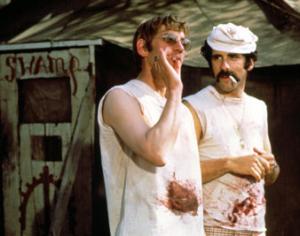 M*A*S*H, the television series, played a huge part of my childhood, not only during its first run, but also in syndication where I have no idea how many times it ended my day at 11PM on channel 41 (UHF) in Southwest Michigan.  Recently, over a period of a couple months, I rewatched all eleven seasons of the series and found that while some episodes don't hold up that well, a surprisingly large amount of them do, especially the early seasons when it was still a dark comedy, instead of the dramady it would become.  Those early seasons are still reminiscent of the movie, unlike the later episodes which are quite a different thing altogether.  It seemed fitting after rewatching the series that I go back and rewatch the film on which it was based.

For those who only know M*A*S*H through the television series, seeing other actors playing Hawkeye, Trapper John, Henry Blake and Hot Lips can seem quite odd (Gary Burghoff as Radar was the only main castmember to reprise his role in the series).  If you can separate the two and look at them as two completely different entities that just happen to contain some characters with the same names, you'll find that the movie and the series are equally great, but for different reasons.

Set during the Korean War at  a Mobile Army Surgical Hospital (hence the name), the plot follows the humorous adventures of a trio of Army surgeons from their arrival at the camp until their departure.  It's easy to see why someone thought it would make a good television series, because the 'plot' is really just a series of vignettes or episodes.  Hawkeye and Duke arrive, Hawkeye and Trapper fly to Japan to operate on a Senator's son,  Hawkeye, Duke and Trapper get rid of Frank Burns, and the whole outfit plays a football game, are some of the things that happen in the movie, each one of which could be an episode of a television series.  Although there's a lack of plot, there's still a real feeling of a journey with these characters that leaves you feeling completely satisfied by the conclusion.

One of the biggest differences between the movie and the series is that the movie is more subtle in its anti-war stance.  In the series, especially in the later episodes, we are constantly told that war is hell.  In the movie, we are shown bloody surgery in crude conditions and the deadly consequences of war, but without being bludgeoned over the head with it.  Hawkeye never pointedly says war is hell in the movie because it so obviously is that there's really no need to vocalize it.  In one scene a group of people are playing poker in the Swamp (Hawkeye's tent) and outside through the netting you see a shroud wrapped body being taken away on a jeep.  Hawkeye watches the jeep as it drives away, but not as the centerpiece of the scene, only in the background.

While the cast is great, it is Robert Altman's direction that really makes the movie standout.  Under his direction the film has a very realistic look and feel to it.  A trademark of this movie is the way that the lines are spoken over each other by a multitude of characters, especially in scenes where Radar appears and he says Colonel Blake's lines before he does.  Often lines continue as voiceovers after the scene has ended and another begun.  You have to really pay attention in some scenes to hear everything that is being said.

Although there are some artistic touches and there is a message to it, what it mainly is, is a comedy.  There are some very funny moments throughout its length.  The football sequence, while quite funny, does seem out of place though.  Almost the entire camp engages in a footbal game with an Evac hospital in a scene that seems as if it should be in another movie altogether.  Hopefully there weren't any wounded that day because apparently there was no one there to treat them.

Like the series, many of the attitudes and points being made here are more reminscent of the 1970s instead of the 1950s.  The Korean War is in many ways being used as a substitute for the Vietnam War.  The language, the smoking pot, etcetera, are clearly aimed at 1970s audiences.

While on a technical level the movie is probably superior, it doesn't engender the same level of affection that the series did.  The characters in the film are harder and you don't get to know them to the same degree as in the series.  That's one advantage of an eleven season show, you get plenty of time to build a relationship with the characters.  I always enjoy the movie when I watch it, but it will never hold anywhere near the same place in my heart or my memories as the long-running series. 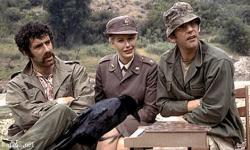 Like Scott, I too have fond memories of the sitcom. It is one of the best and longest running in television history. The movie is just as important. Upon its release in January of 1970 M*A*S*H completed the celluloid adolescence that Hollywood had been experiencing throughout the 1960’s. M*A*S*H was the Hollywood movie grown up.

No contest, the 1960’s wins hands down and M*A*S*H, in terms of content, language, graphic gore, sex and nudity, as well as technical aspects like editing, length of shot, camera work, and especially sound, as Scott mentioned, perfectly embodies these advances. Robert Altman is the father of the modern movie. There wouldn’t be another decade to compare until the CGI revolution of the 1990’s.

Scott is right about the movie being more Vietnam era than Korean era in terms of attitude. Altman admitted as much in interviews. The irreverent, subversive humor is very antiestablishment. Take this exchange between Hot Lips and Father Mulcahy. It smacks of the counterculture hippie movement.

Hot Lips (exasperated): “I wonder how such a degenerated person ever reached a position of authority in the Army Medical Corps.” Father Mulcahy (ironic): “He was drafted.”

Or when Colonel Blake says without a hint of irony, “Ever since the dark days before Pearl Harbor I’ve been proud to wear this uniform.” As Scott wrote it is subtly antiwar.

Some of the humor is very silly. During the football game when the ringer on the opposing team gets sedated and begins to stumble around Hot Lips and the other nurses, acting as cheerleaders, begin to chant gleefully, “He’s hurt! He’s hurt! He’s leaving the game, he’s hurt!”

I agree with Scott that the football game scene takes you out of the movie. The players openly smoking pot on the bench is a bit too anachronistic. And although the entire movie was shot in Southern California, this is the only scene that doesn’t look or feel like Korea. Nonetheless, M*A*S*H remains a seminal movie in the advancement of the Hollywood motion picture and it launched the career of one of the most creative directors of the last 50 years. 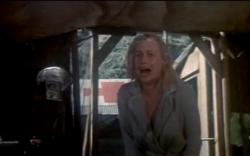 My brothers mentioned that M*A*S*H, the movie, preceded the television series.  What they did not mention was the novel the film was based on.   H. Richard Hornberger, writing under the pseudonym Richard Hooker, based the novel on his own experiences as a surgeon serving in a M*A*S*H unit in Korea.  One of his personal letters is featured in the book,  "War Letters: Extraordinary Correspondence from American Wars," By Andrew Carroll.   Hornberger wrote home about poker games, playing baseball in deep mud and plenty of down time.  He wrote of drinking with some sailors and American soldiers being hurt by their own mortars and mines.   It seems his experiences go hand in hand with what is depicted in this film.

The one thing I did not remember from watching this film in so many years is just what dicks Hawkeye, Trapper and Duke are.  They pick on Frank Burns simply because he is religious.  They put Frank's and Hot Lip's sex act on speaker for the whole camp to hear.   The film includes one scene where Burns is a jerk to a Pvt Boone, "It's too late Boon. You killed him."  For which Trapper appropriately socks him in the mouth.

Hot Lips did nothing to earn such scorn.  Her big crime was turning down their sexual advances.  They thought nothing of exposing her naked to the entire camp while she was in the shower.  Her hysterical outburst to an unconcerned Henry Blake, is one of the film's highlights.  "This isn't a hospital. It's an insane asylum. And it's your fault."  Kellerman earned a well deserved Academy Award nomination for best supporting actress.

Colonel Blake is likewise a snob.  When performing surgery, Blake asks, "Does anyone know if this is an officer or an enlisted man?"  A nurse answers that he is enlisted.  "Make the stitches big."  Blake instructs.

M*A*S*H has many great lines.  When Frank is seducing Hot Lips, he says, "God meant us to find each other."  She opens her robe and says, "His will be done."  My favorite line of Kellerman's is when she says to Hawkeye, "Well that kind of informality is inconsistent with maximum efficiency in a military organization."   I like Trappers description of Hot Lips as, "The sultry bitch with the fire in her eyes."

My brothers considered the football game to be out of place and I agree.  A part I was bored with was when Painless Pole is unable to wave his flag.  A man not being able to get it up was a subject not often discussed in 1970, but has since become so common that commercials to cure such things appear on televisions all the time.  Altman re-enacting the last supper was a bit clever though.

I agree with my brothers, the attitudes and looks are more reminiscent of the 1970s than the 1950s.  Who in 1950 had Trapper's mustache or sideburns?  Casting an African American as a surgeon says more about when this film was made than when it takes places.  One of the last all-black army regiments was not disbanded until late September 1950, two months after the start of the Korean War.  A black army surgeon in 1950 was extremely rare.

M*A*S*H has it's moments, but other than Kellerman stealing nearly everyone of her scenes, it has not aged well.