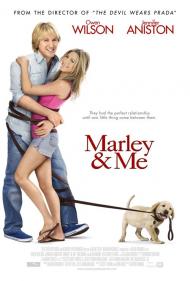 A movie that will resonate with anyone who has ever owned a dog.

So I'll go and see a light-hearted comedy about a bad dog with my wife on Christmas, I thought. They wouldn't release a movie on Christmas in which a dog dies at the end of it, would they? Turns out, they would, and did. Sure, this is still a good movie and it's got some genuine funny moments in it, but at the end of it there was more sniffling and nose blowing in that theater than a doctor's waiting room at the height of flu season.

Owen Wilson and Jennifer Aniston play a married couple (John and Jennifer Grogan) from Kalamazoo, Michigan who move to Florida as newlyweds and adopt a Yellow Labrador puppy named Marley. Marley turns out to be a friendly, but mischievous dog of the type who makes the audience laugh but the owners suffer. John, a reporter, ends up writing a column for the newspaper he works at that largely seems to rotate around the adventures of Marley. As the movie goes along it follows Marley and the Grogan's growing up. They have three children, they move to Pennsylvania, they have marital problems; you know, typical married life stuff. The movie ends with the death of Marley due to old age. I'm not normally what I would call an animal person, but even I got misty when it happened. In fact, if you can't feel something at the end of this movie, you must be dead inside.

The old movie adage is to never make a movie starring children or animals because they're difficult and will likely end up stealing the movie with their cuteness. This movie manages to avoid that cliché. It manages it mainly because it never humanizes Marley. Too many movies, like the Hotel for Dogs movie that was shown in the previews before this movie, give animals human like qualities and intelligence. Marley is all dog and that's what makes him so lovable. Also, Wilson and Aniston have a believable married couple chemistry that works in their favor and they really are the stars. The story of the growth of their lives together is the real story of the movie.

While the drama works, it is in the comedy where this movie shines. Wilson and Aniston are both talented comics and they playoff each other and Marley quite well. The drama works although I do think they milk Marley's death a bit at the end. The part with the children at the grave is a bit over the top. 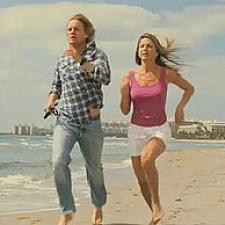 John and Jennifer have apparently never heard of a dog leash.

As dog owners, my wife and I found this movie to be a better drama than comedy. All of the “comedic” situations they have with Marley are none too extraordinary, even though the film treats them like they are. Many dogs freak out during thunderstorms. Many family dogs know when the kids get home from school or its owners from work. All dogs like to chew on things. In fact, the whole time, I kept thinking what lousy owners the Grogans were, not how unique Marley was. It takes them a very long time to understand the need and value of a leash.

What I liked most about Marley and Me was it, better than any other film I have seen, shows just what a house hold dog provides. He is company for them, whether it is in the home, pool or a walk on the beach. Even though John first bought Marley with an alternative motivation and Jennifer has a moment she wants to get rid of Marley, he manages to become an actual member of the family. He is there through the good times and bad. After watching this movie, I felt like going home and hugging my dogs. As John Grogan says, “A dog doesn’t care if your rich or poor. Give a dog your heart and he will give you his.” Does anything else in this world provide such unconditional love?

As Scott wrote, this movie is not actually about Marley. This is about a family growing and coming together. John spends most of the movie wondering if he is in the right place, doing the right thing. There is a bit of George Bailey going on with him. He always thinks his friend has an exciting life and he is somehow missing out. A scene at the end of the movie has John realize his life has taken the exact path it was meant to. He just happened to take a happy pooch along with him. 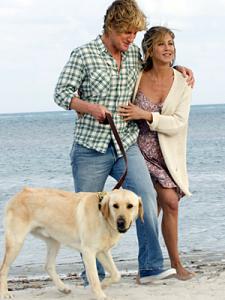 The movie for which both Owen Wilson and Jennifer Aniston will be best remembered.

Scott, you really didn’t expect Marley to die at the end? How could he not? That’s the emotional payoff of the story. I agree with Eric that it succeeds more as a drama than a comedy but I disagree when he wrote that the movie treats Marley’s funny habits as extraordinary. On the contrary I think they intended for dog owners to relate to Marley’s frustrating behavior. The humor is more chuckle inducing than laugh-out-loud. The drama is where they really went for it. It’s schmaltzy with a capitol S but it works.

I have never been a fan of Aniston or Wilson but this is by far the best work I have seen either of them turn in. I agree Scott, they do have a believable married couple chemistry and I like how the characters grow together over the course of the movie. Eric, you mentioned that John Grogan reminded you of George Bailey. I understand why but the character I kept thinking of was Hubbell Gardner. He even had his own J.J. in Sebastian.

It was quite a shock seeing Kathleen Turner as the dog trainer, Mrs. Kornblut. Age has not been kind to her although she has retained her regal screen presence and wonderful way with a line. Something tells me that Marley & Me is going to grow in stature over time and will one day be the movie for which both its stars are best remembered.