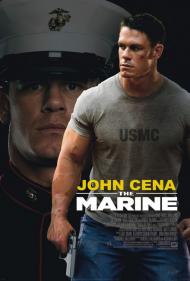 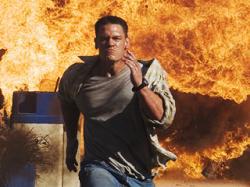 John Cena in The Marine.

In the tradition of The Rock, John Cena has begun a movie career after gaining notoriety as a wrestler. Both wrestlers/actors are muscle bound former college football players. Whereas The Rock has now proven he can act in a variety of roles, Cena has just proven that he can do action. His role in The Marine is evidence that he may very well be successful in films, but he will need to find better material than this.

Cena plays a Marine who gets kicked out of the service after disobeying an order. In doing so he rescues some captured soldiers in Iraq. Once back in the states he wastes no time getting busy with the wife and getting bored with a job, as a security guard. After losing that job, he and the wife take a road trip. Meanwhile, some bad guys, and a girl, steal some diamonds and go on the lamb. At a gas station they run into each other and some cops. The bad guys end up taking John's wife hostage and John gives chase. The rest of the movie plays out as predictable as a WWE wrestling match. A minor twist is thrown in but it makes little impact to this simple plot.

Cena has the build and look of an action hero in the grain of Jean-Claude Van Damme. He is 90% muscle and 10% charm. He has few lines of dialogue but does well enough with what he has. The plot however, is pointless. These imbecile thieves call attention to themselves every chance they get. After robbing a jewelry store, they don't just stroll away as no one outside knows what they did. They blow up a cop car.

Why? I have no idea. One member of the group is prone to telling sad stories of his youth. Too often the camera lingers on the bad guys and then quickly gives us a shot of Cena running. Sure, Patrick is a bigger movie star than Cena, but this is Cena's movie. We, the audience, do not care about the bad guys other than how Cena is going to kick their ass.

Cena, who is also a rapper, has lately been wearing military attire at his matches. No doubt he is doing so for publicity sake of this movie, which celebrates Marines as heroes. Other than lifting Mr. Britney Spears, Kevin Federline, above his head and slamming him to the mat last night. Nothing he can do is going to generate enough interest to make The Marine a success.