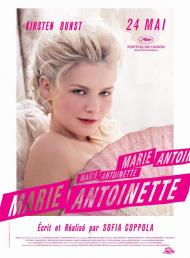 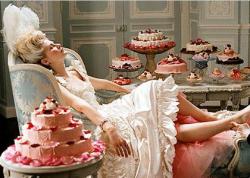 Marie Antoinette the movie is a lot like the real Marie-Antoinette must have been. It's pretty to look at, but ultimately pretty meaningless.

The movie covers the period of her life from the time she leaves her home country of Austria to wed the Dauphin of France, and ends just after the peasants have stormed the palace of Versailles, but stops abruptly short upon her leaving the palace and so her execution is never shown. Her life at the palace is portrayed as something akin to an 18th century Paris Hilton. It's a never-ending series of parties, shopping and general merriment. Her understanding of politics is completely nonexistent. Her idea of economizing is to cut back on diamonds.

Director Sofia Coppola's greatest strength lies in her visuals. There are several protracted scenes that are sans dialogue and yet you fully understand exactly what is going on and how every character on the screen is feeling. She also makes good use of a modern soundtrack that at first seems out of place, but which you quickly discover compliments the antics on screen perfectly. At times it almost feels as if you are watching a long, very well made music video.

The weakness of the movie is in the story, because there really isn't one. You spend two hours watching an irresponsible child spend money. You are never shown what life is like in France outside of Marie-Antoinette's world and if you know nothing of the French Revolution you might end up thinking, what bastards those peasants are for ruining this girl's life. Sure she lives extravagantly, but why'd they have to storm her palace?

Another of the movie's problems is the actor's ages. The real Marie-Antoinette was only 14 years old when she married Louis XVI of France. Kirsten Dunst is 24. Louis XVI was 15 when he married and Jason Schwartzman is 26. This wouldn't be so much of a problem if one of the few actual plot points in the movie wasn't the fact that Louis won't have sex with Marie when they first marry. At 15 you could excuse this behavior by saying he was too nervous or inexperienced to make a move, but at 26 you start looking for other reasons. I was waiting for it to be revealed that he was either gay or mentally challenged. The movie also covers 20-plus years and neither character seems to age or mature a day.

I have to confess that I am hardly a Marie-Antoinette scholar, but even a cursory reading about her on the internet reveals that she had a stronger hand in politics than is shown in this movie, particularly following the revolution, during the time of her imprisonment. It also seems that there is some disagreement regarding the volume of her excesses and that after turning 30, these excesses decreased, although by then it was too late and her reputation was irreparably damaged. In any case, the real Marie-Antoinette seems far more interesting than the vacuous young Queen portrayed in this movie.

Perhaps I sound too harsh, because truth to tell, I was never bored while watching it. It's far to pretty to look at for it to be boring, but I left the theater feeling nothing for this character. Perhaps if her death was shown I might have felt something, but it's not and so I didn't.

Coppola's last film, Lost in Translation, shared some of this movie's traits; long moments of silence, interesting visuals, but at its heart were two characters that I cared about, this movie can't boast the same. 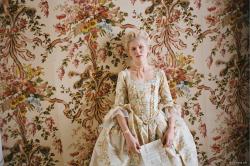 I loved this movie visually, as Scott mentioned it's pretty to look at. That's an understatement really, gorgeous is a more apt adjective. The clothing and sets are extravagant and impressive. I also love the grand, old-fashioned style of directing that is Sofia Coppola's. Her shots are never hurried, they unfold naturally. Unlike many young filmmakers, Coppola is not overly infatuated with the speed edit.

But Scott is right about the problems as well. I never for a second got the feeling that this was an accurate historical representation of the life of Marie Antoinette. Dunst does the best she can, given the script, as the infamous, and ill-fated, Queen of France. But if the real woman had been this dull and passive I hardly think she would be remembered the way she is. The fact that the main characters don't appear to age at all bothered me too.

If we were shown more than just Marie Antoinette's extremely insulated royal life, it would have made the movie feel more complete. As it is, we are shown nothing going on at that time outside of the royal household. An artistic decision perhaps but one that deflates the emotional impact of the movies' climax. On a positive note I thought the final shot was brilliantly succinct.

As slow as this movie moves, Coppola might just as well have painted it, instead of filming it.

Coppola is one of those directors that has a classic, artistic eye. Her direction is in the neighborhood of Louis Malle. They each film numerous scenes with no lines of dialogue. Their films are often more like still life paintings than actual movies.

Marie Antoinette has great color schemes and visuals. It sets a mood of unhappiness, and although she occasionally finds contentment, the film never strays too far from despair. The film was not shot on a set, but actually at Versailles, which is now a museum. Coppola uses the location shots very well, but she gives them more screen time than Louis.

The many scenes of Louis and Marie eating an elaborate meal together could have been summed up in a painting of the two of them looking in different directions, as could the scene of them on their wedding night looking awkward and nervous as a dozen people put them to bed and pray for them to have a successful wedding night conception.

Many scenes pass without anyone saying a word. Scott was not bothered by that, but I enjoy dialogue. Call me a lazy viewer, but I do not like to guess what is going on. When I want to see a painting, I will go to a museum, but when I watch a movie, I expect to see a motion picture.