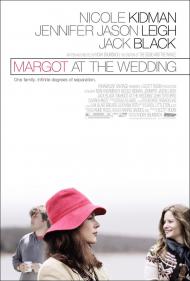 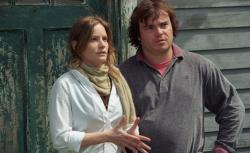 Jennifer Jason Leigh and Jack Black in Margot at the Wedding.

Margot at the Wedding is the latest work from Brooklyn born writer/director Noah Baumbach. While not as enjoyable as his last effort The Squid and the Whale it does feature some superb acting and some uncomfortable laughs in this dark neurotic comedy.

Kidman is the titular Margot, a well known New York writer. She and her teenage son are off to Long Island for the occasion of her younger sister's (Jason Leigh) wedding to an unemployed artist type played by Jack Black in what is for him a departure from his usual hammy role. In a style very much influenced by Woody Allen the story unfolds in a series of vignettes over the course of the weekend.

The family as written is dysfunctional to the point of caricature. Everyone is pretty much self-absorbed and easily offended. Especially Margot. She is constantly putting everyone around her down yet bristles at even the slightest hint of her own imperfections. Nicole Kidman gives an Oscar worthy performance in what must surely rank as one of her least likable characterizations. Jason Leigh, likewise, should garner a Supporting Actress nomination as Pauline. She is an incredibly youthful looking 45, believably playing younger sibling to the, in real life, 5 years younger Kidman. The relationship between Pauline and Margot is richly complex and the two actresses play wonderfully off of each other.

Also worthy of mention is newcomer Zane Pais who plays Margot's teenage son Claude. He holds his own with the adult actors and themes and gives a subtly mature performance in what is anything but a children's movie.

Margot at the Wedding is not for everyone. It may not play well in the Midwest or South. Unlike The Squid and the Whale, which was a coming of age story, this one shows the adult point of view, and as such lacks a truly sympathetic character to invest in. There is humor and drama to be had albeit in a rather flimsy plot. But Margot at the Wedding is worth seeing just for the great acting it elicits from a very talented cast. 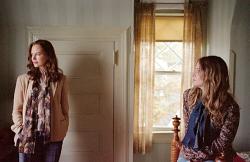 Nicole Kidman and Jennifer Jason Leigh in Margot at the Wedding.

I'm not sure I understand the "midwest and south" comment, but apart from that I pretty much agree with you Patrick, even if I don't quite share your enthusiasm. I don't see how geographic location plays into appreciating good acting when you see it. And basically, as Patrick hinted, that is all this movie has going for it.

Eric has mentioned in his reviews before that you need characters you can root for, for a movie to be great, and that is what this movie is lacking most. All of these characters are truly fucked up (I was going to say flawed, but that's not nearly strong enough). Margot is a totally self-obsessed bitch. Her sister is a little bit nicer, but they are both as competitive as each other, trying to one-up the other in the emotions sweepstakes. I can't say I liked anybody in this movie, even the son that Margot wishes was a daughter, who, as the victim of his mother's emotional state, comes closest to being sympathetic.

While there is some humor to be found, mainly from Jack Black's character, ultimately this movie is just too damn depressing. A great movie leaves me feeling energized. A really bad one can sometimes make me angry at having wasted my time and money on it. This one just left me emotionally drained. We each have enough of our own problems without being burdened with these people's as well. And the real truth is that none of these people have any real problems. They have no financial worries and none of them are suffering from some life-threatening disease. They're also both far too old to still be traumatized by their childhood (unless something much more dramatic happened to them that this movie doesn't mention). If you ask me the only problem they have is too much time on their hands to obsess about themselves.

The acting in this movie might be great, but the movie certainly isn't. Or maybe there's just too much "midwest" left in me, so I was unable to enjoy this movie. 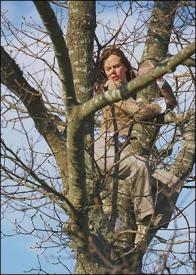 Too bad Margot was not in the tree when Malcolm cut it down.

I am not sure what Patrick meant by, "Margot at the Wedding is not for everyone. It may not play well in the Midwest or South." Unlike Patrick, I do not speak for an entire region of people, but I will write that although I am from the Midwest, I found everyones performances quite enjoyable. Kidman makes a great bitch, but then she is usually good in anything she does.

The real surprise for me was Jack Black. Like the rest of the cast, he is given some great lines that come out of nowhere. When talking to Kidman about having a child, he says, "I haven't had that thing yet where you realize that you are not the most important person in the world...I'm anxious for that to happen." When going to talk to the neighbor about a tree, he blurts out to his wife, "Ingrid is asking if I was ever gay, you know what that's about?"

All the good dialogue in the world does not however, add up to an interesting story. Having Black cry and tell Leigh that he almost, nearly, sort of had an affair so Leigh can have an outburst is more ridiculous than plot developing. All of these self absorbed people thrive on such dramatic moments. They bathe in their collective problems, rolling around in them like happy pigs in mud.

As Scott wrote, I like to root for a character. Here I rooted for the entire cast of characters to meet with a swift end. They do nothing but bring heartache to one another. I very quickly grew tired of this lot and could not wait for the film to come to its conclusion.