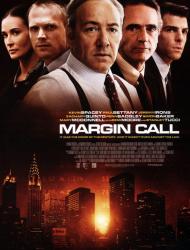 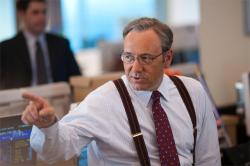 Money bores me. Of course I like it when I have it and I'll happily spend it, but talking about it or talking about making it or just anything that smacks of financial news and my mind will start to wander. This could explain why I never have enough of the stuff, but it also brings me to my point, which is that because of my disinterest in high finance, I would never have guessed that I would enjoy a movie like this one that takes place over 36 hours inside an investment bank at the beginning of the most recent financial crisis.

The movie and the day begins on the trading floor at a large investment bank (loosely based on Lehman Brothers) where a series of layoffs is taking place.  Eric Daley (Tucci), the head of Risk Management is being let go despite his 19 years with the firm and his insistence that he's in the middle of something important. Before he is escorted off the premises he passes a  USB drive to Peter (Quinto, who also produced) and tells him to be careful with its contents.

Peter works late into the night analyzing the data on the drive and comes to the horrifying conclusion that were the market to fluctuate even slightly, the bank's debts, which includes thousands of mortgages that they're holding, would be higher than the value of its assets. An emergency meeting is called which is escalated through various levels of executives until it reaches the CEO (Irons) who must make the tough call. The bank can sell all of their assets as quickly as possible before every other bank realizes they're in the same boat, knowing that what they're selling is basically worthless and that they'll be screwing over all of their clients in the process and ruining their reputations, but still making a profit. Or they can sit tight and try to bolster the market, probably take a big loss, and hope the market doesn't fluctuate the way they've predicted it will. They also know that any of the other banks could come to the same conclusion as they have and begin the selling and then they would lose everything and the market would be screwed.

While the financial wheeling and dealing may sound complicated, it is the personalities, the writing and the acting that make the movie so good. This isn't just a dry reading of financial statements. In fact, the financial details are skimmed over and kept vague until quite a ways into the story. In a nutshell you just need to know that the bank is facing a financial crisis and they face an ethical dilemma about how to solve it.

What's interesting and also funny in a dark way, is just how little the many executives seem to know about the data of the financial markets. Peter, the analyst, is literally a rocket scientist, or at least a former one. Whenever he begins to explain the situation to one of the executives, they invariably respond with the phrase, "Tell it to me in English."

The cast is excellent. Spacey is terrific as Sam, the old pro who is sickened by what he has to do, but as he puts it, "I still need the money. After all these years, you wouldn't think I would, but I do." Irons makes the perfect CEO who isn't so worried about the morality, more with the bottom line. Bettany is the younger hotshot salesman, Will. He takes Peter and his junior analyst friend Seth under his wing for the duration of the crisis. Their lack of experience allows them to act as the audience and ask questions, many of which are answered by Will. Tucci has a small but crucial part and Demi Moore plays almost the only woman in the entire film.

Another thing that makes the story so good is that it's not just the Occupy Wall Street crowd throwing tomatoes at the banks. While it does paint them as greedy, it doesn't show them as evil. If anything, it shows that a bank is made up of human beings just like any other corporation. It is perhaps their ignorance in not truly understanding the data underlying an increasingly complex financial system that is shown to be their biggest flaw.

Sharply written, tensely paced and well acted, Margin Call takes what could have been a complex and boring subject and serves it up as gripping entertainment.

Scott, your line, "While it does paint them (banks) as greedy, it doesn't show them as evil."   Gave me to pause.  Banks, like any corner store, any union or any college, is a business, and like any business, it wants to stay successful.   The difference between a bank and other businesses is that decisions they make can effect entire economies.

One scene exemplifies this quite cleverly.  Demi Moore and Simon Baker enter an elevator already occupied by a cleaning woman.  They talk over her, literally and figuratively.  They will both walk away financially sound from the decisions made by the bank, while a woman who has to clean offices in the middle of the night, could be devastated by them.

I enjoyed how Margin Call made such a dry subject entertaining.  Not only do Seth (Penn Badgley) and Peter (Zachary Quinto) act as guides, they also represent the two faces of Wall Street.  Seth is all about the money.  He constantly discusses what different people make and marvels at their huge salaries.  Peter is a numbers nerd, analyzing equations that would put many people to sleep or cause headaches.

As Scott wrote, if Margin Call accomplishes anything, it is that it puts a human face on banks.  It shows that these stereotypical fat cats have huge amounts of pressure and stress on them.  Too often we cannot see them beyond their large salaries or million dollar bonuses.  Sure they get compensated well, but they make the kind of wide reaching decisions that only politicians can compare to.  They are after all, just making a living, covering their ass and looking out for number one, just as we all do.

Eric, of course all businesses want to stay successful. But that isn’t the situation facing the bank in this movie. They are going under regardless, it’s just a matter of how (unless of course the Federal Government steps in and bails them out with billions of taxpayer dollars, but I guess that will have to wait for the sequel). At any rate not every business owner would make the same call that the CEO in this movie does, which is to knowingly sell a worthless product to unsuspecting clients, thereby turning a last ditch profit while ruining the reputations of all involved. I think that’s what Scott meant by it showing the bank as greedy.

I agree the cast, led by Spacey, is excellent and the story moves swiftly despite its rather dry subject matter. We watch as the devastating financial news climbs higher and higher up the ranks and the squirming and scrambling begins. It’s ironic but not surprising that the higher up in the company the executives are the less they know about the actual numbers and formulas involved.

The script shows both sides of the ethical dilemma the looming financial disaster raises. The characters played by Spacey and Tucci represent the conscious of the bank and speak more for the common man. There are also two persuasive speeches in support of the bank’s position or the side of greed, if you will.

One is delivered by Paul Bettany’s character Will to Seth. “People wanna live like this in their cars and big fuckin' houses they can't even pay for. The only reason they all get to continue living like kings is cause we got our fingers on the scales in their favor. I take my hand off and the whole world gets really fuckin' fair really fuckin' quickly and nobody actually wants that. They say they do but they don't. They want what we have to give them but they also wanna - you know - play innocent and pretend they have no idea where it came from. Well, that’s more hypocrisy than I'm willing to swallow, so fuck em. Fuck normal people.”

Margin Call deserves the Best Original Screenplay Oscar. It’s intelligently scripted with quotable dialogue on top of being a well-acted thriller about the beginnings of the most recent financial crisis.