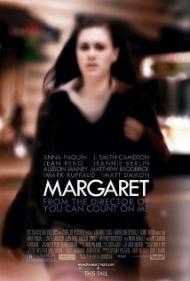 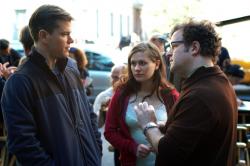 The first thing you will likely note about Margaret is the many movie stars who make appearances. I am not sure why they were all attracted to this coming of age film that wanders more than Moses in the desert but luckily they were as their presence is all that will garnish this film any attention.

The movie is about Lisa, an opinionated 17-year-old New York City high-school student. While out shopping she unintentionally assists in causing a traffic accident in which a woman ends up dying in her arms. She has no idea how to emotionally react to this situation. At first she lies about what happened but then decides to throw the bus driver under the bus, metaphorically speaking.

Although that is the plot, in essence, the real movie is just barely under the surface. Lisa is at an age where truth and fiction are colliding. Where opinions are debated in class and cried about behind doors. She is at that self-centered age where only her views and needs hold any importance. The world revolves around her. In one scene she busts into her mother’s room to talk to her while her mother is masturbating. She wants to see the bus driver get into trouble to cleanse her own guilty conscious but it takes her most of the film to come to that conclusion.

Throughout the film we are shown many scenes of a play Lisa’s mother is acting in. We also have several trips to an opera. Clearly this is to symbolize that Lisa is starring in a drama of her own making. She could easily move onto the next act in her life but she chooses to drag out this one ad nauseam. I was reminded of the William Shakespeare quote, “All the world's a stage, and all the men and women merely players: they have their exits and their entrances; and one man in his time plays many parts, his acts being seven ages.”

Lisa is surrounded by adults such as her mother, whom she lives with, and her father who lives in California, with whom she oftens talks on the phone. She engages in heated debates with her teachers and fellow students. She teams up with a friend of the deceased woman. Her naïve self-obsessed ideology is in direct contrast to the reality of the adult world. We see Lisa’s mind at work as she mentally struggles to understand why the world around her works as it does.

If you have immense patients, this movie is two and a half hours long, you may enjoy this slow paced melodrama. Lisa becomes real, although not exactly likable. The final scene taking place during the opera performance is over the top but fits in with all that has come before it.

Margaret was filmed in 2005, but due to legal issues and conflicts between the studio and Kenneth Lonergan over editing, this movie sat around for years. Lonergan, God forbid, wanted a longer cut than the studio. At one point Martin Scorsese stepped in to edit the film. He had previously worked with Lonergan, who wrote the Scorsese directed Gangs of New York (2002). In 2011 Margaret finally saw a limited release in the United States and later a foreign release. Although in some markets it received good reviews, it never came close in its theatrical run to making back its 14 million dollar budget. Margaret is far too slow and lugubrious to be entertaining. Lonergan could have easily told the same story and made the same point in half the time.