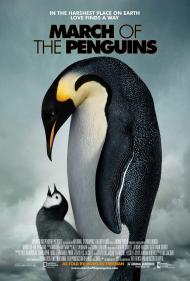 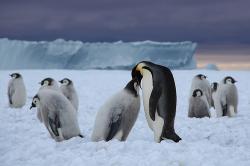 March of the Penguins

March of the Penguins is a very family friendly look at the mating and reproductive life of the Emperor Penguins. The sacrifices they make and the hardships they endure are a joy and a sorrow to watch. This film can be viewed at face value; that of an interesting, informative film on penguins or it can be seen as symbolism for parenting.

At the same time each year, penguins pop out of the ocean and walk, or waddle, for miles to reach their frozen mating grounds. There, they inexplicably find a mate and produce an egg. The couple must then fast and endure harsh colds in order to see the eggs survival. The point of the movie is to show to what great lengths the parents go to in order to protect the egg and chick.

March of the Penguins is a pleasant enough movie and I did find it very informative. To read an analogy into it would be easy but pointless. This movie is about penguins, nothing more and nothing less. I have read some online discussions where it has been debated as to how this movie is pro-life. If you wish to see that then that is what you will see.

Director Luc Jacquet does not angle this film in any way to make a political, religious or, most surprisingly to me, an environmental point. The movie is from start to finish an honest to God documentary. Unlike the hateful propaganda that Michael Moore puts together, March of the Penguins is just a straight, forward film about nine months in the lives of a bunch of penguins.

Morgan Freeman narrates the English version and does so with his usual comforting warm tone of voice. His straight, no nonsense delivery blends very well with the cool, icy vistas and meandering penguins. Even though he is there to help inform, the narration never dominates the movie and the film truly speaks for itself.

Although I found no hidden agenda in March of the Penguins, I did find a peaceful escape into a real world that I knew little about. These little amphibious birds endure so much to bring life into the world that I felt quite inspired. But perhaps that is just what I chose to take from it.