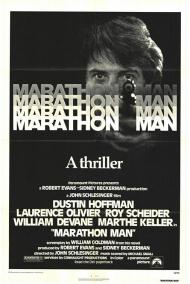 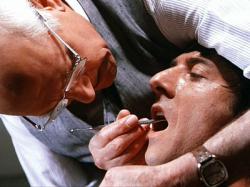 Marathon Man is one of those movies that's considered to be a classic, but is actually rather overrated. It has a couple of classic scenes, a famous line, and features the match-up of veteran actor Laurence Olivier and method actor Dustin Hoffman, which lead to one of the most famous acting anecdotes of all time. It's also rather slow paced, with weak motivation and a disappointing ending.

The famous anecdote, which Hoffman has disputed, supposedly happened after the famously method Hoffman stayed awake for 48 hours in real life because in the scene he was going to play, he was supposed to have gone without sleep for that long. When he showed up for work all bedraggled and worn out, Olivier supposedly quipped, “My dear boy, you look awful. Why don't you just try acting? It's much simpler.” Perhaps ironically, it was Olivier who was nominated for the Oscar for his part, while Hoffman was ignored.

This is one of those movies where the plot seems more complicated than it really is. Olivier plays Szell, an old Nazi living in Argentina. The character is based on the infamous Nazi, Josef Mengele. He's brought out of hiding when his brother is killed in a car accident in New York City. For reasons never explained, his brother was safeguarding a hoard of diamonds in a safety deposit box for him. His attempt to retrieve his treasure is complicated by an American agent played by Roy Scheider, who may or may not be working with Szell. Scheider plays Hoffman's older brother, which brings the evil Nazi and his cohorts into contact with Hoffman's PHD student character, nicknamed Babe, who is also a runner, hence the title.

The line, “Is it safe?”, which Szell repeatedly asks Babe while torturing him was ranked #70 by the AFI on their “100 Years...100 Movie Quotes” list. The scene is quite tense and the torture method is simple, but effective. Szell uses a dental drill without anesthetic in a way that will make you squirm in your seat and dread your next dentist visit. It's a scene that deserves to be famous, but once you learn all of the movie's secrets, you'll be wondering as much as Babe was, just what the hell Szell was asking about. What's the “it”, he's referring to? If it's the diamonds, shouldn't he be asking, “Are they safe?” And instead of asking about them, why isn't he just going to get them?

Later, near the film's finale, the other famous scene takes place. Szell is walking through the Diamond District in New York City when he is recognized by an old Jewish woman who begins yelling his name. Szell tries to hurry through the crowd as people begin to wonder what she's yelling about. It's probably the film's best scene.

Director Schlesinger makes good use of gritty, 1970s New York City, including many scenes around the reservoir where Babe does his running and on the Brooklyn Bridge during an exciting chase. This was the first movie to be released that made use of the Steadicam and it's most noticeable during the running scenes.

The marathon in the title could also be in reference to the running time. At over two hours there's plenty of room for trimming, particularly in the first half, which is quite slow and plodding. The other problem with the first half is that it tries so hard to make the film seem like a mystery, when it's all really very simple, that it wastes time with red herrings.

With such a great reputation, I'm sure plenty of people will take umbrage with my opinion of this film, but watched objectively today, with no knowledge of its “classic” status and perhaps you'll be more inclined to agree with me.

I agree this movie is flawed but I still enjoyed it more than my brother did. I liked the way the story unfolded. It does take a while for the plot to kick in but I was intrigued by the two separate story lines. One about a graduate student runner in New York City and the other about a mysterious American “business man” in Paris. Hoffman, Scheider and the script make these two characters compelling. By the time we learn they are brothers it becomes clear this is a thriller not a drama.

Scott mentioned the movie's two most famous scenes. They are both classic screen moments. The dental torture scene is simple yet brilliant. It evokes a primal fear of pain that is so intense they shortened the scene by 8 minutes after the original version made test audiences sick. The other scene, the one in the Diamond District is, as Scott said, the best moment in the entire movie. There is so much going on. It has suspense, danger, frustration, revenge, hope and despair all mixed together. It's also cleverly shot, terrifically acted, and it ends bloody.

Laurence Olivier was suffering from cancer when he played Szell. This movie revived both his career (it was his biggest hit in years) and his health, as his cancer went into remission and he lived on for another 13 years. He created one of the scariest and most vile villains in movie history. He somehow seems to project evil from his eyeballs (see photo).  It may not be his most remembered dialogue but my favorite line of Szell's is when he comments that America used to be so confident that God was on our side, but that now we don't seem to be so sure.

In 1976 there were still Nazi war criminals in hiding around the world. This fact made Svell even scarier then than he seems today. And for my money he acts Dustin Hoffman right off the screen.

Hoffman, as Babe, overdoes it. His performance is hammy by comparison. He takes the Method style too far. In scenes where he was supposed to be out of breath, rather than fake it, he would run a mile so that he was really out of breath. I agree with Olivier, why not just act it? I mean you've never heard of an actor agreeing to take a bullet for realism have you? The audience knows it's all just shadows and mirrors.

I didn't particularly like the ending. It's over done. During the final confrontation between Babe and Szell the movie turns into a run of the mill thriller. Up until then it had seemed fresh and original. Today Marathon Man is mainly remembered for those two brilliant scenes and for one disturbed (and disturbing) villain asking that perplexing yet undeniably frightening question. “Is it safe?”

Yes, Marathon Man starts slow with several seemingly superfluous scenes of Dustin Hoffman. We do not actually have to see him jogging to find out he enjoys it. His life is routine with school and running. His brother Doc has a life that is anything but and the pace definitely picks up after we meet him.

The thriller part of the story begins with Doc in a Parisian opera house. He is in deep and lives are being lost. Doc learns of the death of Szell’s brother from another agent, Janeway, making that scene of road rage pointless, even though it is poetic Jewish revenge.

Marathon Man is intriguing throughout most of its running time. So much is implied but not always explained. In the novel, Doc and Janeway are gay lovers, yet here it is only vaguely implied. “…get your ass over here…screw appearances. I miss you…listen Janey, why don’t you finish what you're doing and get your ass over here.” Doc seems far too forward with Elsa at dinner, even though they supposedly have just met. What exactly was Doc’s business relationship to Szell? Why did Babe and Elsa get mugged by Szell’s thugs? Of course the big question being, what does “it” in, “Is it safe?” truly mean?

I watched with eager interest as Babe tries to figure out what the hell is going on. The problem being that he never clearly does and neither does the audience. If it is just about diamonds, why were they not all simply smuggled out of the country all at once? Why did he have so many couriers if it were just diamonds? Was there more going on that the movie never explains?

Although he seems a bit too old playing a graduate student, Hoffman does a decent job here as a man caught up in things beyond his understanding. I agree with Patrick, that Hoffman is upstaged by Sir Laurence Olivier playing a Nazi demon. His stare is so cold and scary that he could beat Hannibal Lector in a blinking contest.

Marathon Man is an interesting watch with plenty going on to keep you entertained. The problem being that we are never given a clear picture of the characters and their motivations. My brothers mentioned that much editing was done, while I wonder how much was lost from page to screen.