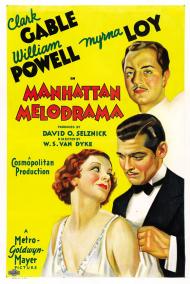 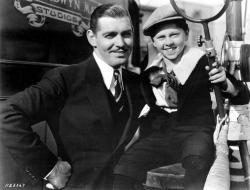 Clark Gable poses with Mickey Rooney, who played his younger self, in Manhattan Melodrama.

1934 was the year that Clark Gable went from prince to king. After the enormous success of It Happened One Night in which he played a comic romantic lead, Manhattan Melodrama has Gable, once again, playing a ruthless gangster.

Manhattan Melodrama lives up to its title. It tells the story of two best friends who are orphaned twice in the first ten minutes of the movie. In a montage of years passing by we see them grow up together, ending up on opposite sides of the law. One becomes a successful D.A. with his eye on the Governor's mansion and the other becomes a big time bootlegging gangster. Their story gets more complicated when they both fall for the same woman. But Blackie, the gangster, is a cold-blooded killer and so it is perfectly clear where the story is going. That's right, the District Attorney gets elected Governor and must choose between pardoning his childhood friend and watching him fry in the electric chair.

The great cast elevates this drama to a higher plane. Gable is completely believable as the remorseless yet incredibly charismatic killer. Mickey Rooney has a few good scenes as the young Blackie, although it is a little difficult to accept that he grows up to be Clark Gable. Myrna Loy plays Blackie's straight-laced moll whose dreams of having a traditional family life can only be realized when she falls for William Powell's D.A. (This was the first of their successful movies together. The Thin Man was released just a few weeks later.) And she gets to deliver the movies most famous line. "Not Blackie." Still it is William Powell on whose shoulders the movie rides. Though better known as a comedic leading man, here he gets to demonstrate his considerable dramatic skills as well, most notably during the movies climax where he convincingly wrestles with his own conscious and sense of honor.

To modern movie audiences the plot follows a clearly visible path. But remember that in 1934 it was considered an original storyline and, in fact, one the Oscar for Best Original Screenplay. One final historical note: This is the movie that John Dillinger was watching with his mysterious "Lady in Red" right before being gunned down by the FBI. 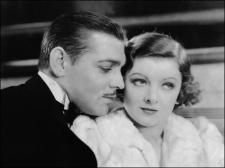 Although William Powell shoulders the key decision of the movie, it is Gable's character, Blackie, that I was struck by. Jim is a DA and later a governor. Blackie could have begged him to spare his life or turned a blind eye to Blackie's crimes, but Blackie never does. Although the decision for Jim is a tough one, Blackie never adds any pressure by calling in their history.

This is best demonstrated with the coats. Jim is investigating a murder, and fingers point to Blackie. A jacket of Jim's was found at the scene that he loaned to Blackie. Jim is prepared to arrest Blackie when he shows up with an identical coat and convinces Jim that it is his and the other a mere look-a-like. A prop in the pocket, placed there by Blackie, seals the deal. Jim is a man of honor and Blackie knows it, so he has to construct a lie that Jim would believe. Blackie never asks Jim to be anything less than what he is, even to save his own life. It is in Blackie's respect for Jim that makes this movie so interesting.

Gable plays a murderer, but you like Blackie none-the-less. His love and respect for Jim is so honorable that it nearly makes up for his crimes. Okay, it idoes not make up for them, but it does make it harder to hate him. Blackie admires Jim for who he is, even though he knows he is the one who is going to bring him down. It is a fascinating relationship. 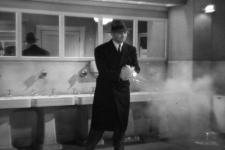 I agree that the cast is great, but I was less impressed by the movie overall than either of you two. Like you say Patrick, this movie is aptly named as melodrama. It's pure over the top soap opera and frankly, I was a bit bored by it.

I enjoyed Gable as Blackie, but he's so damned noble that it hardly seemed plausible. I never really bought the whole relationship between the two men. Powell's Jim was this crime fighting DA, and he clearly knew what Blackie did for a living, but it never seemed to bother him. To me Jim comes across as a bit of a pompous hypocrite. Blackie at least has some roguish charm.

It is easy to say with hindsight that no way could Mickey Rooney grow into Clark Gable, but just looking at Mickey as a child he looks just close enough to have grown into Blackie. Knowing the short little comedian that Rooney would eventually become, it does add a bit off of unintentional humor now.

One interesting sidenote, the General Slocum paddle boat disaster that opens the film, was a real event. In terms of loss of life, it was the worst disaster in New York City until 9/11. 1,021 of the 1,342 onboard were killed. It doesn't really have a bearing on the film other than the fact that it's what causes the boys to become orphans, but I found it more interesting than I found this movie to be.

The fact that this movie is considered to be such a classic and the fact that both of you raved about it, made me expect more from it. It is a talented cast, but they weren't enough to hold my interest.