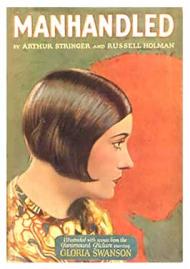 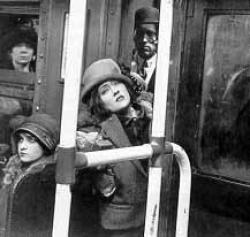 Gloria Swanson as a single girl in New York.

Manhandled is my favorite Gloria Swanson silent film.  Although she did other comedies, this is not her typical role.  It may be part of why I enjoy it so much.

Tessie is a sales clerk at a large New York department store.  She rides the crowded trains to and from work.  Diminutive Swanson nearly gets trampled several times.  Although known more for high drama, Swanson could handle slapstick with the best of them.

She returns to her apartment building where her boyfriend lives down the hall.  He works days as a mechanic and nights as a Taxi driver.  She wants to go out and party while he has to work.   The next night she goes along with a friend to a party.  At first she seems out of place as the talk is of art and philosophy.  She tries her hand at some jazz dancing and ends up losing some underwear.  She falls on her butt with her legs in the air.   She charms all the men and catches the eye of a handsome artist who hires her to pose for him.

She takes the job as her boyfriend is going out of town to sell an idea to a Detroit auto maker.  The artist has other things on his mind and attempts to rape her.  Luckily the Wizard of Oz walks in and saves her.  Frank Morgan was at the party and impressed by her impersonations.  He hires her to pretend to be a Russian countess at his tea house to drum up business.

He also makes a pass at her.  To get out of that, she accepts an invite to go on a date with the son of the man who owned the department store she once worked at.  He also tries to have his way with her in his limousine.

Finally her boyfriend returns with good news of his invention.  She is out and he finds all of her expensive clothes that were bought for her.  He tells her he no longer wants to marry her as she has been "manhandled."    As this is a romantic comedy, you know all will end well.

Swanson will be remembered as Norma Desmond and her silent bedroom dramas.  It is a shame she did not do more comedies as Manhandled is her most accessible film.   This is a role you would imagine Clara Bow in, not Swanson, but she does a great job.  Her bread and butter was the wealthy snob, but here she demonstrates she could play common as well as anyone.  Gloria Swanson truly was the greatest silent film actress. 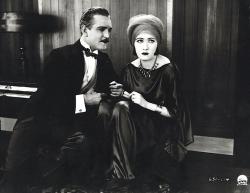 According to her autobiography, Swanson On Swanson, to prepare for her role as a gum chewing shop girl, Gloria spent two days working incognito at a counter at Gimbels department store. To avoid being recognized the world famous movie star disguised herself by donning a blonde wig, stuffing cotton in her nose, powdering over her beauty mark and painting on new eyebrows and lips. To complete the transformation she put on a five dollar dress and stuffed her bra.

Also according to Swanson On Swanson, the idea for the picture began as a title. The newly formed Hays Code (which wouldn't get its teeth for another decade) forbade depicting “manhandling” on the screen. Then Paramount vice president Sidney Kent suggested it as a great title and as a way of thumbing their nose at the code. The plot was created around this title. The result was Swanson's biggest box office hit since her days making bedroom dramas with Cecil B. DeMille.

The movie's most famous scene is Tessie's commute home on the subway (see photo in Eric's review). Anyone who has taken a New York City train during rush hour can relate to her hilarious predicament. It is only slightly exaggerated and Swanson's facial expressions as she gets pawed and winked at by various men on the crowded train are truly mirth inducing.

I was disappointed that the version of this movie on Youtube doesn't include Swanson's Chaplin impersonation. Like she would later famously do in Sunset Boulevard, she put on that funny little mustache and derby to do her impression of the Little Tramp in the party scene where she also impersonates a Russian countess (ala Pola Negri). Having spent a day working with Chaplin at Essanay Studios in Chicago back in 1915, Swanson had firsthand knowledge of his mannerisms. Also in this scene, real life showgirl Ann Pennington (playing herself) demonstrates an energetic Charleston. Her date in this scene is real life actor Brooke Johns playing himself.

Tessie's friend Pinkie was played by Lilyan Tashman. Although she isn't well remembered today she was notorious at the time. This Brooklyn born actress worked successfully in vaudeville, on Broadway and in the movies. She was famous for her extravagant wardrobe and lavish parties. In 1925 she wed allegedly gay actor Edmund Lowe and her lesbian affairs were gossiped about in Hollywood. Lilyan Tashman died of cancer in 1934 at the age of 37.

Gloria Swanson is quite funny as Tessie McGuire, whether doing zany dance steps or crying hysterically to cover up her inability to speak Russian. She makes a great flapper, even strumming that ubiquitous 1920's accessory -a ukelele- in one scene.

She also proves that Norma Desmond's boast was accurate. She could say anything she wanted to with her eyes, as she demonstrates at the end of the movie when she gets dramatically rejected by her boyfriend upon his return from Detroit a newly minted millionaire. The ending is sweetly romantic. With Manhandled Gloria Swanson proved herself to be the most versatile silent movie queen of them all. 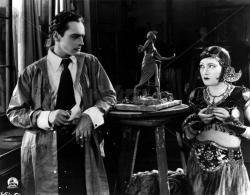 It seems as though a great many silent films were set in department stores. Perhaps because they seemd very modern and perhaps because being a clerk in one was one of the few jobs open to women at the time and so were an easy way to throw men and women together. In any case, Manhandled uses the setting to good effect and the best scenes in the film are related to Tessie's job at the store, either while on the shop floor or on the commute home.

Both of my brothers mentioned the opening scene with Swanson stuck on the subway. This is easily the best and funniest scene in the entire feature. With a little extra length her commute home could have been a two-reel short of its own. In fact, it's such a funny scene that everything after it feels like a let down. Nothing in the rest of the film approaches it. Anyone who's ever spent time on a New York City subway at crush hour will be able to relate to her prediciment which has barely changed in the almost 90 years since this movie was made.

The rest of the film is sweet enough, but not nearly as comic as the opening sets it up to be. Although there are a couple of funny scenes. I also laughed at the crowded salesfloor of the department store with women fighting over the clothes with Swanson and Tashman in the middle of the crowd. Swanson's drooping bloomers during her dance number is also worth a chuckle. The romance between Swanson and Moore is the weakest angle in the story as there's very little chemistry between them. She's more interested in the party lifestyle, while he seems more in love with his engine part than her.

Patrick hit the right word when describing Gloria Swanson. She was a very versatile actress. She could do drama and comedy and even proved in just a couple of films that she could act just as well in the talkies and even had a passable singing voice. Amongst actresses of her day, she really was the greatest star of all.