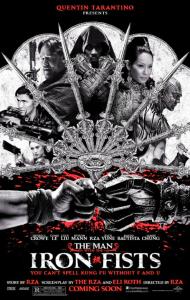 Dave Bautista and RZA in The Man with the Iron Fists

The Man with the Iron Fists has been a pet project, several years in the making, for Co-founder of the hip hop group Wu-Tang Clan, RZA. He and Eli Roth, under the blessing of Quentin Tarantino, wrote the script over a couple of years time. Unfortunately that was not long enough.

From the very start, everything seems far too confusing for a plot as simple as this. We meet different warring clans and lovers about to be parted. In simplest terms though, sometime in 1800's China, a large shipment of gold gets the attention of several oddly dressed, martial arts learned clans. They all converge on it at a brothel. All hell breaks loose, with almost the entire cast getting killed in shower after shower of blood.

If RZA had kept the tone light, campy and over-the-top throughout, this could have been a fun and entertaining film. The guy has poor Asian actors, prostitutes every where, and a guy who turns to brass. (think Colossus from the X-Men). However, even though it is clearly a fantasy, he takes it all far too seriously. Sure you can argue that he is emulating those cheesy 1970s karate films, but that would just be giving it an excuse for being bad.

The weakest aspect of the entire film is the character that RZA wrote for himself. He is an African American blacksmith living in a small Chinese village, whose biggest employer seems to be a whore house. In fact, he is in love with one of the sex workers and gives her extra money so as to one day free her from a life of prostitution and be with him. As fine as this whore is, I do not believe anyone is dumb enough to give a woman, who you pay to pretend to like you, extra money in hopes of a future. When you have to wait in a line for your girlfriend to love you long time, you know you should probably look elsewhere for real love.

RZA plays his part straight. Early on he narrates this line, "When you forge a weapon, you need three things: the right metal, temperatures over fourteen hundred degrees... and someone who wants to kill. Here in this village, we got all three." It is a bit much, but nothing compared to his modern vernacular. He liberally uses the word "shit" and fuck". At one point he tells a story about how he ended up in China. I thought for sure this was going to be a time travel excuse as he talks like someone of contemporary times. Instead it is just that he was a run away slave. The rap soundtrack, peppered with swearing, would have better worked with a time travel plot device as well.

An over weight, grey haired Russell Crowe has very little to do. You could have trimmed a third of his screen time without actually affecting his contribution to the plot. His first few scenes simply show him enjoying the brothel. He is given a line that is a direct lift from John Wayne in Big Jake (1971). When someone remarks that they did not realize he was still alive, Crowe responds, "Reports of my demise have been greatly exaggerated."

The best this film has to offer is the action scenes, and thankfully RZA includes plenty of them. There is the sister/brother martial arts team called Gemini, who fight by swinging each other around with very large blades. There are clans who dress like wolves. There is the love lorn Chinese man revenging the death of his father, who has more weapons hidden on him than you can count. Even the prostitutes can kick ass, using their own unique weapons.

The best one in the film though is former WWE star Dave Bautista. With his background, he seems to be the only one in the know on how this all works. He makes a good entrance, with his muscles doing the acting for him. He is threatening and the perfect villain for a story like this. His body turns to brass when threatened, or at will. His best moment is when he goes to the brothel and uses the prostitute the blacksmith loves. He smiles as he effortlessly throws her over his shoulder and walks to her bed. This leads to a show down between Brass Body and the blacksmith, whose forearms and hands are now made of iron after Brass Body cut them off.

Reportedly, the original cut for The Man with the Iron Fists was four hours long, with RZA suggesting it be turned into two films. Luckily, Eli Roth talked him into cutting it down to a single film lasting only an hour and a half.