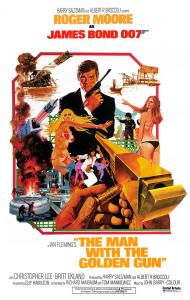 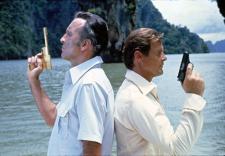 Slowly, Roger Moore is working himself into the part.

The Man with the Golden Gun, Roger Moore's second turn as James Bond, is even more of a mess than Live and Let Die; his first Bond movie. However, despite that, I actually found it to be mildly more entertaining because Moore seems to have settled himself into the role and is the center of nearly every scene.

Christopher Lee of all people, plays the Bond villain this time. His Scaramanga is the man with the golden gun, a super assassin who seems to have turned his gun sights on Bond. He also has a rather silly plan to use Solar Energy to make a lot of money, but that's so unimportant it's hardly worth mentioning. The only point to this movie is put Bond in different set pieces and chases in foreign locales.

There are some really horrendous moments in this movie, but less so than the last go round. The worst is in fact a repeat of the last movie's biggest problem. Southern Sheriff, J.W. Pepper makes a return appearance, coincidentally taking a vacation in Hong Kong when Bond is there. He shows up not once, but twice in the movie, taking part in a car chase scene that features the most famous stunt from the movie, that of Bond jumping a river and having his car rotate 360 degrees during the jump. As in the last movie, the character of Pepper is god awful and completely out of place.

As this was the 1970s and the Kung-Fu movies were popular, the movie has to feature some karate. Over the years, the Bond villains have come up with some pretty lame ways of trying to kill him, but this movie has to have the lamest. When one of the minor villains decides to kill him, he doesn't just shoot him, he sends him to a karate school where I guess he thinks they'll chop him to death. Instead of course, Bond is able to fight his way out with the help of a sidekick and a couple of school-girls.

The Bond girls are pretty unnotable. Maude Adams makes her first appearance as a Bond girl (she would return in Octopussy as a different character) and she looks good, but is pretty ineffectual. Britt Eckland is there to provide some comedy relief. She has a very 1970s look, if you're into that sort of thing, but overall she's a pretty tame Bond girl as well.

Moore seems to find his stride as Bond here. Gone is the rugged machismo of Connery and in is the slightly effeminate, smooth as a silk cravat style of Moore's Bond. This movie plays more to his strength and you can kind of see how with a better script, he could play James Bond. He'd never be as good as Connery, but you can almost see how he might work in a minor light-hearted way.

The movie itself though is complete shit. You get the feeling the plot was an afterthought, put together not as a story, but as simply a series of, "Ooooh, let's have Bond do this." and "What if Bond was here and he had to do that!" And it all goes on for far too long. Again a Bond movie runs over two hours when it should have stopped about 30 minutes before it does.

I thought Live and Let Die had to be the worst Bond movie in the series, but now I'm not so sure. The Man with the Golden Gun is running a very close second. One thing about this one. The Lulu sung theme song is so catchy, it will stay with you for days.

How good of a secret agent is James Bond if he is well known by people of the underworld? Scaramanga is a professional assassin who owns a realistic wax figure of James Bond. Just as Tiffany Case knew who James was in Diamonds are Forever, Bond is somehow a world famous "secret" agent?

As is the tradition with Bond movies, it opens with a teaser, only Bond does not appear in it. Then we have the theme song where Lulu mistakes screaming for singing, as psychedelic colors and lines give away the time period. Bond is a man for all ages, not a fad of a particular time.

Once you get past that, the movie never gets much better. Bond does his usual globe hopping. He meets and beds some women. He gets into some fights. Why he just stands there while the two school girls save him is beyond me. The chauvinistic James Bond I know and love would never let a woman fight his battles for him. Women have one role in Bond movies, and it is not for him to hide behind. Unless, of course, he is about to make some sexual innuendo.

The producers of the Bond series clearly did not understand Sean Connery's appeal. Lazenby was just a pretty face, and Moore was far too light weight. Too often he came across more as a pompous poof than a hardened man of the world. Only Brosnan was able to duplicate Connery's suave masculinity.

The Man With the Golden Gun was definitely a low point in the Bond series. It started a horrible tradition of repeating characters. Just as Sheriff Pepper made his second showing here, Jaws would be around for a couple of movies during the Moore years. Apparently the early Moore movies were about trying to figure out how to take Bond into the future. Although there were other clunkers to come, he at least he returned to being a "secret" agent. 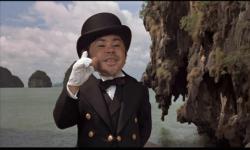 Herve Villechaize as Nick Nack in The Man with the Golden Gun.

This gets my vote as the worst Bond movie ever (although like Scott I enjoyed Lulu’s theme song (Eric, she does not scream and you are wrong about Bond, sure he is a man for all ages but he is also a fad of a particular time since each of his movies is a time capsule of its era)).

Bringing back the redneck Southern sheriff was unforgivable. At least his presence made sense in the previous movie since it was set in the South and had a mostly black cast for him to play off of. Having him show up out of nowhere in Hong Kong is not only annoying but entirely unlikely.

Besides that this Bond seems to be more slowly paced than most, especially when compared to You Only Live Twice which I just watched and which never let up action wise. This movie has too much talking and 007 romancing bland women.

The normally riveting Christopher Lee is even a disappointment as the weaselly Scaramanga with the superfluous nipple. Hervé Villechaize’s Nick Nack is the more interesting villain. He is suave and cunning. That is until he winds up on that counter throwing bottles of wine at Bond before being stuffed into that suitcase.

Roger Moore does continue to make the part his own. His Bond is more of an upper-class Brit; he’s less rugged and more elegant (what Eric rather crudely labeled a "pompous poof") than any other actor that has played the iconic super spy. In the James Bond movie pantheon I would place The Man with the Golden Gun at the very bottom of the list.