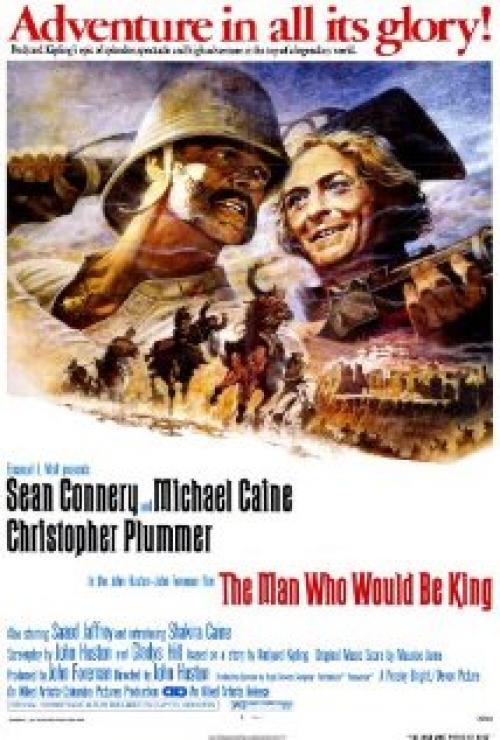 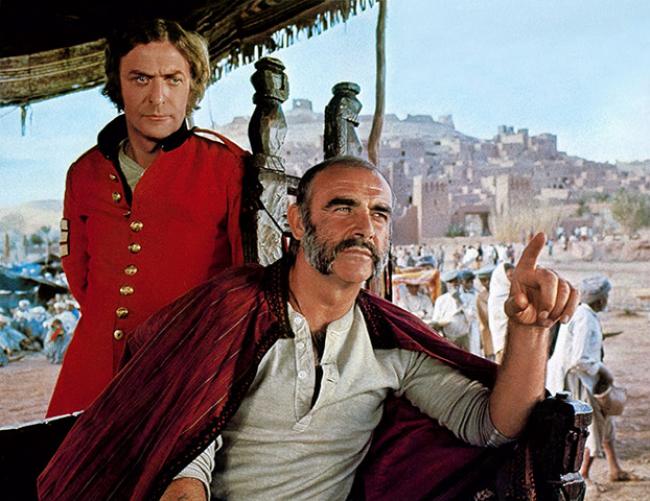 Michael Caine and Sean Connery in The Man Who Would Be King.

Director John Huston was a fan of Rudyard Kipling since early childhood when he spent an extended bedridden stay in Arizona due to an enlarged heart during which he read and reread much of Kipling's work. As an adult he'd been planning to make this film since the 1950s when he wanted to cast Clark Gable and Humphrey Bogart in the leads. Over the years, Burt Lancaster and Kirk Douglas were in discussions to play the parts, followed by Richard Burton and Peter O'Toole, then Robert Redford and Paul Newman. Supposedly it was Newman who advised Huston that it really should be British actors and suggested Connery and Caine. Finally, with those two attached, Huston was able make his film more than 30 years after first suggesting it.

Both Connery and Caine have listed this film among their personal favorites. I'm sure part of this is due to the fact that it's the only time the two longtime friends ever appeared together in the same movie. In Caine's case, according to his autobiography, it was also a thrill for him to work with John Huston, one of his longtime idols, and an even bigger thrill to play a part originally intended for Bogart, the acting idol of his youth. Shooting was also made more pleasant for Caine with the casting of his real life wife in the part of Roxanne. In any case, one of the best things this pairing brings to the film is their shared chemistry. Their natural camaraderie really shines through as they seem perfectly natural together and play off of each other perfectly, particularly in the film's lighter moments.

The plot tells the story of Danny (Connery) and Peachy (Caine), two former British non-commissioned officers in India in the late 1800s. A couple of scoundrels, they hatch the plan of traveling to the remote kingdom of Kafiristan with 20 modern rifles where they intend to ally themselves to one of the local kings whom they intend to assist with the conquering of his enemies. Their eventual plan of course is to control this king with the intention of becoming rulers in their own right. After several adventures and mishaps the pair find themselves successful beyond their imaginings when Danny is mistaken for a god by the superstitious natives after seeming to survive an arrow to the heart without a scratch.

Kipling himself, played by Christopher Plummer, is included in the film as an unnecessary framing device as Peaches relates the story to him in flashback. However, at just over 2 hours this doesn't accomplish much beyond extending the running time. This is a movie that works best as a fast paced adventure tale and as such needed a tighter edit. You could remove almost the entire first 20 minutes of the film without losing any of the main story.

Another problem with the film is its somewhat uneven tone. There are a few laugh out loud moments of comedy, many of which are caused by Peachy and Danny's innate British sense of superiority that was so common of the time and of Kipling in particular. However, these moments of levity aren't blended as smoothly into the action as they could have been and nor or the true moments of drama such as when Danny starts behaving as if he too suspects there's more to his nature than mere mortality.

On the whole though, these are rather minor quibbles that don't wholly detract from the enjoyment of this film. The sweeping locations, the sense of grand adventure, and the chemistry of the two leads make it feel like an old fashioned epic in the very best sense of the phrase. It's at least worth a watch for the chance to see Caine and Connery together. 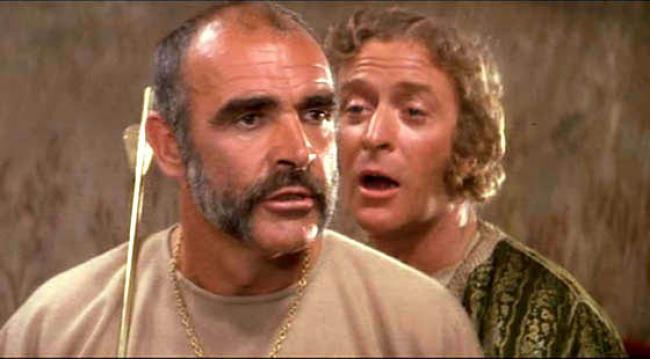 Scott's description of The Man Who Would be King as having a sense of grand adventure is a very accurate one but not the compliment you may think. There is some adventure to be found here but much of it is more implied than experienced. Two men travel to an isolated location, discover a civilization barely touched by the rest of the world and quickly become its leaders. Very few of the actual battles are shown. The real adventure and entertainment is watching these two men pretending to be something they are most definitely not.

I could not agree more though, that the chemistry between Sean Connery and Michael Caine is the movies strongest aspect. It is their charisma alone that rises this film above its mediocre plot. Both actors get their moments to shine. When their interpreter Billy, tells them of the native leader, "He wants to know if you are gods." Caine answers, "Not Gods...Englishmen. The next best thing." Connery addresses some local men they are training to be soldiers, "When we're done with you, you'll be able to slaughter your enemies like civilized men."

It is that very arrogance that inspires them to rise above their station in life and it is that very same sin that causes their downfall. Danny and Peachy are two former English soldiers who stayed in India after a war and are now petty thieves and con men. They spend much of their time looking to entertain themselves without the inconvenience of responsibility. To other Englishmen, they would be a step above a tramp. However, when they show up at this back water village in their red military uniforms, and carrying guns, they suddenly rise to the level of a King.

Danny and Peachy are clever but just clever enough to get themselves into trouble. They perfectly fit the old saying, "Too clever for their own good." It is fun watching them lie and plot but we also recognize in them their complete lack of character and know it is only a matter of time before their own egos take them down. These are not men of quality but for a brief time they are able to fool others into thinking they are. What a great metaphor for so many political leaders.

The Man Who Would be King does start a bit slow as Caine and Connery are in separate scenes. Once they get together and start sharing the screen, this film is definitely worth watching. What a shame they did not work together again. I can still hear their humorous catch phrase, "God's holy trousers!" whenever they are surprised.