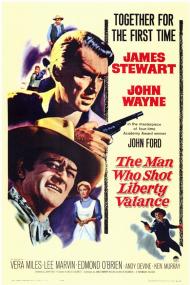 Jimmy Stewart and John Wayne together at the same time is the real joy of this movie.

Although The Man Who Shot Liberty Valance is a good movie, the real joy in it is watching two of the greatest legends of Hollywood team up and square off. John Wayne and Jimmy Stewart have two of the most distinct voices and on screen personas of the golden age of the movies. This film takes full advantage of both of them. Wayne plays a rough and tough gunslinger who does not take crap from anyone, while Stewart plays an idealist, pacifist.

As the movie opens, a senator and his wife return to a small western town to bury an estranged friend. The senator, Ransom, was made famous for being the man who killed the notorious bad guy, Liberty Valance. Most of the movie plays out as a flashback of Ransom telling the story to a local newspaperman.

Filmed in black and white, due to the fact that Stewart plays an old man and then in flashback a man just out of law school. Except for the close ups, Stewart pulls it off. The script gives him plenty of opportunities to pontificate and give a few speeches. Anyone who knows Stewart’s work can just hear him saying "Liberty Valance." In several scenes he gets worked up and George Bailey takes over. This movie works a bit like It’s A Wonderful Life meets Mr Smith Goes to Washington. The character of Ransom was perfectly suited to Stewart.

Wayne is likewise good. This movie utilizes his strength and this is the movie people are imitating when they do the Duke, "Whoa, take 'er easy there, Pilgrim." He says to Stewart. Wayne also has a dramatic scene where he gets drunk. In real life it was reported that the Duke could put them away and his Academy Award, for True Grit, was for playing a drunk.

For a western, this movie covers many themes. Wayne and Stewart each play opposite men, vying for the affection of the same woman. The movie gets a little political and patriotic. My favorite line in the movie is after Stewart finishes his story, he asks the newspaper man if he will write the true story. The writer responds, "No, sir. This is the West. When the legend becomes fact, print the legend."

Wayne as Tom Doniphon represents the true heroes of the West and not the made-up legends who came after him.

The Man Who Shot Liberty Valence isn't just a good movie, it's a great one. Truly one of the greatest Westerns ever filmed and very unlike the classic "Cowboy saves the day and rides off into the sunset" type that were so popular in the 1950s and 1960s. It's a dark film that is tinged with a kind of sadness that I find very appealing.

That line you mention Eric about printing the legend really sums up this whole movie. You have Wayne's character of Tom who is of the genuine West. The last gunslinger hero you might say. Through most of the film he is dusty and trail worn. He isn't the marshal or acknowledged as a hero. He just is who he is; the big strong silent hero and he dies in obscurity. Stewart's Ransom is the legend of the West. To the people in the movie he is the cowboy who saved the day, got the girl and rode off to live happily ever after. And look at the scene where Ransom is nominated for the Senate. His competition is a duded up cowboy in fake western clothes who has someone else ride a horse into the room, up on stage and then twirl a lasso around him in a mockery of the West and summation of how many people at the time this film was made viewed the West.

Although part of the reason for filming this movie in black and white might have been to hide Stewart's age since he has to play both young and old, I also think that it suits the mood of the movie, which is dark and claustrophobic. You'll notice that at the beginning, where Stewart is telling the story, it is filmed outside and during the day. The flashback is filmed almost entirely on a soundstage and almost completely at night. There are no Technicolor desert vistas here.

While there are some deeper things going on in this movie, on the surface it is also just plain enjoyable. As you say Eric, the best scenes are when Stewart and Wayne are in them together. Wayne is terrific here and is at his heroic best. I love the scene when he faces off with Valence in the restaurant. When Wayne's steak is dropped on the floor he tells Valence to pick it up and when one of Valence's toadies goes to get it instead, Wayne kicks him away from it. Only he does it so casually and yet so threateningly, it's a treat to watch. He also delivers a great reply to Valence's, "You looking for trouble?" when he says, "Why you aimin' to help me find some?" He's such a bad-ass here.

Despite being a darker kind of Western, there are also some funny moments to be found. Andy Devine is good as the inept marshal who hides whenever trouble comes around and Edmond O'Brien as the drunk newspaper man is also amusing at times.

Not a lot of Westerns have stood the test of time. The Man Who Shot Liberty Valence is one of the ones that has. 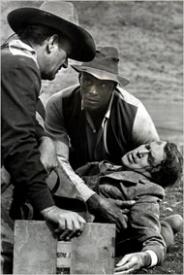 John Ford was such a great director that even one of his lesser westerns is better than most. Liberty Valance is a good but flawed entry in his noble canon. This is one of the last of the black & white westerns (and Ford’s last movie in the format) since by the early 1960s only serious dramas or very low budget movies were still being shot without color. It works because, as Scott mentioned, most of the movie takes place indoors, or at night.

Although the movie features some great acting, dramatic tension and a decent emotional pay-off it is also methodically paced. The introductory scene before the flashback and the political rally at the end are both drawn out needlessly. The scene where Ransom is nominated for office drags on as an excuse for old time Ford player John Carradine to have a bigger cameo.

For the record Stewart was too old for the role of a greenhorn lawyer fresh from law school. For the most part Wayne is good as the tough as nails Tom Doniphon although this is definitely a supporting role. His drunken rampage at the saloon is a bit overcooked though. Eric, this is the first movie in which he calls someone “Pilgrim” but not the last by any means. Lee Marvin hams it up as usual in all of his scenes as the one-dimensional but charismatic titular villain.

The supporting cast is filled with familiar faces. Besides Andy Devine you have Vera Miles as the love interest, Denver Pyle as one of the townsfolk and classic bad guys Strother Martin and Lee Van Cleef as members of Liberty Valance’s gang. Edmond O’Brien is effective in the part of the florid speaking, alcoholic, newspaperman. This role would most assuredly have gone to Ford stalwart Thomas Mitchell a few years earlier. Mitchell died the year this movie was released.

Woody Strode, one of the most famous black actors to appear in westerns, plays Pompey, John Wayne’s sidekick. His career dated back to Stagecoach in 1939 and continued until The Quick and the Dead which was posthumously released in 1995. He is best remembered as the gladiator Kirk Douglas battles in Spartacus.

The Man Who Shot Liberty Valance is nearly a great movie. A tighter edit and less talking would have made the difference.