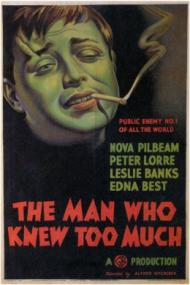 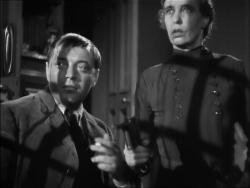 What I think makes Hitchcock such a brilliant director is the fact that his movies all contain elements of 'Art' and yet you get the feeling, after watching them, that he didn't make them for art's sake, but for no other reason than it was the best well to tell a really great story. The Man Who Knew Too Much is a perfect example of this. By 1934, the year The Man Who Knew Too Much was released, Hitchcock had already been directing movies for more than a decade and many of his classic elements were in place. The densely woven intrigue, the lighting and surreal camera angles, the moments of shock. And he uses symbolism and foreshadowing in the best way, to advance the plot or deepen character development, not to show off.

Bob and Jill Lawrence find themselves caught up in an international plot to assassinate a foreign dignitary while on winter sports holiday in the Swiss mountains. When Jill innocently dances with a Frenchman, a gunshot rings out and he slumps to the floor. Before dying he tells her to get a 'brush' from his room and to immediately contact the British Consul. They are soon in over their heads, however, as teenaged daughter Betty is kidnapped and, once back in London, the intrigue and danger continue to grow.

Like any good Hitchcock movie you never really know what to expect next. This movie is full of surprises, whether it is the scene at a dingy dentists office or the chair fight at the sun worshipping religious sect's meeting (of course they are just a cover for the terrorist organization). And the bad guys are perfectly creepy. Peter Lorre is his usual heinous and deranged self, leading an army of sycophants and assassins.

The gun battle at the movies climax is a great scene. Hitchcock uses many different camera angles and quick edits to enhance the violence of the moment. The final scene even manages to be feminist long before the term was coined and symbolically it brings the story full circle. Hitchcock was so enamored of the script that he remade the movie twenty-two years later with James Stewart and Doris Day in the lead roles. 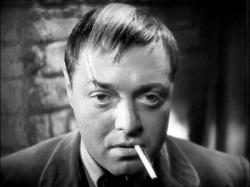 Patrick is right in fawning over Hitchcock's direction. He was not called the master of suspense for nothing. His best scenes are the ones that have yet to happen. He builds the suspense so well. The scene where the mother is sitting in the Symphony Hall is great. Minus any dialogue, you see this woman scan the room and slowly figure out what is about to happen. It is the build up to the event that creates the emotion, not the actual event.

In today's movies, fight scenes have choreographers. People who get paid to plan out and teach the actors the routine of a fight that will be filmed. I don't think they had these guys in 1934. I wish they had. The worst part of Hitchcock's direction is in the fight scenes. The father is in a dentist's chair. He sits as he watches the - obviously evil - dentist walk to a table. His only reaction is to put up his arms and his hands around the dentist's neck as he attempts to put a gas mask on him. The father then stands up, with his hands still on the dentist's neck. He puts the dentist in the chair and then gives the dentist the gas, putting him to sleep. My 8 year old playing superhero around the house could have dreamed up a better action scene. Then there is the almost laughable chair fight scene. Grown men throw chairs across the room at each other. Eventually one man just walks across the room and subdues the other.

This is an old movie which, due to copycats, is filled with clichés. It even has the most commonly used line in movie history, 'Follow that car.' Yet it kept my attention and had me guessing. More than 70 years after its initial release and it still entertains. 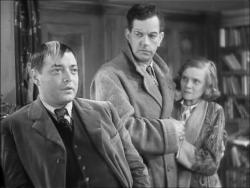 Peter Lorre, Leslie Banks and Edna Best in The Man Who Knew Too Much.

Actually Eric, the most commonly used line in movie history is, "Let's get outta here."

I found this movie to be too often unintentionally funny. The chair fighting scene that you mention Eric is so ridiculous that I find it hard to believe that it wasn't intended to be funny. The bit I laughed at the most though is when the villains are listening to the concert from Albert Hall on the radio and after the assassination attempt has been made, the announcer says, "We now continue with the concert." So never mind that someone was just nearly killed and pay no attention to the blood seeping into the seats and possibly dripping on those sitting below; on with the show!

This is also a such a very, very British movie. Everyone is always apologizing and holding in their emotions. Hell, the guy who gets shot at the beginning of the movie while dancing with Jill even manages to find time to apologize right before he dies. When Jill is speaking to her kidnapped daughter on the phone and later when Bob finds his daughter in the house where the villains are holding her, they are both the epitome of British reserve.

I was mildly entertained by this movie and at an hour and fifteen minutes it hardly dwadles, but I also think the short running-time serves to cover up the pretty flimsy plot and plot holes. Once Bob and Jill decide to not go to the police, why don't the villains just come over to their house and kill them? Is inside a crowded Albert Hall really the best place they can think of to assassinate the guy? If Bob thinks that the villains will kill his daughter if he goes to the police, why does he think they won't kill her if he investigates them (and calls the police while doing so)? It turns out of course that the villains won't kill her, since even after their plans have been foiled they don't kill Bob or his daughter.

Overall I just thought this movie was a little cheesy, even taking into account that it was made over 70 years ago. Yes, there are some examples of Hitchcock's directorial style, but even that isn't enough to raise it above B-movie status.