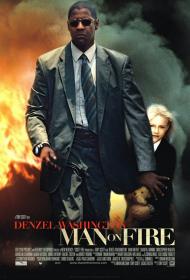 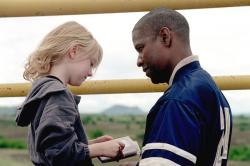 Dakota Fanning and Denzel Washington in Man on Fire.

Man on Fire is a movie with an identity crisis. For the first 45 minutes, it's the story of Creasy (Washington), an alcoholic with a dark and somewhat mysterious past, who finds redemption through the love of a child (Fanning). Then it takes a darker turn and becomes a story of bloody and extremely violent revenge. Both parts are entertaining for different reasons, and yet they seem like two separate movies tacked onto each other.

The movie begins with the chilling caption that in Latin America, a kidnapping occurs once every 60 minutes. For this reason, the richest families employ personal bodyguards. When Samuel (Anthony) needs to hire a bodyguard to get his insurance renewed, he hires Creasy, a former special ops soldier who's turned to drink and fallen on hard times. Creasy's main job is protecting Samuel's daughter Pita.

Pita is played by the 30-year old in a 10-year old's body Dakota Fanning. Her serious yet likable personality soon wins Creasy over. He transforms himself from suicidal drunk to a surrogate father figure while Samuel is away on business. Soon he's even helping her train for a swimming match. While these moments between Fanning and Washington are all character building, many of them are unnecessary to a movie that is over 2 hours long. The point of them all is so that the audience can understand why Creasy wreaks such a mighty revenge when, inevitably, Pita is kidnapped. It doesn't require nearly so much build-up for everyone to understand why Creasy would get that upset over the kidnapping of a 10-year old girl.

The story of Creasy going after the kidnappers is bloody, violent, and definitely not for the squeamish. Fingers are slashed off, body parts are shot off, and at one point plastic explosives are shoved up someone's rectum. Only Denzel's human portrayal of a virtual killing machine keeps you riveted to the screen when you should be turning away in disgust. If there's one thing Denzel proved he could play with his Oscar winning turn in Training Day, it's intense characters. While this movie isn't quite on par with that one, Denzel does a great job with the material that he's given.

Tony Scott, the director, doesn't help the schizophrenia of the movie with his intrusive direction. Hand held camera shots help set a certain atmosphere to a scene, and he makes good use of them. However, his 'stylish' editing hinders his actor's performances. Early in the film, Denzel has a dark turn while in a drunken stupor. Apparently, in an attempt to help the audience understand that Denzel is supposed to be drunk, the camera moves at odd angles, images overlap and the cuts come very rapidly. Meanwhile, Denzel is acting his heart out, but his performance and all emotion are lost in the visuals.

As far as violent films of revenge go, Man on Fire is a good one. The acting is first rate, even if the direction is not. It is definitely not for the squeamish or for members of the Mexico City Tourism Board. If you take anything away with you from this movie, it will be a fervent wish that you never have to spend time there. 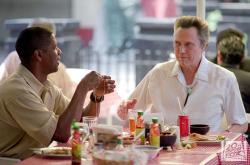 Denzel Washington and Christopher Walken in Man on Fire

I agree with my brother about the direction. Tony Scott nearly ruins the pivotal abduction scene with a combination of slow motion and spastic editing.  It is not the only overly produced scene, but it is one of the most important.  A director fails at his job every time he reminds the audience of it.  Scott has directed many films with action scenes, I have no idea why he thought it was a good idea to ruin the ones here with such frantic motion during the violent scenes.

Man on Fire contains one of the toughest lines ever spoken.  An old man says to Creasy, " In the church, they say to forgive."  Creasy responds, "Forgiveness is between them and God. It's my job to arrange the meeting."   It is a variation on a quote falsely attributed to General Norman Schwarzkopf,  "It's God's responsibility to judge 'Osama bin Laden'. It is our responsibility to arrange the meeting."  The origin of that line is not exactly known but can be traced to a U.S., Marine Corp motto.  As Creasy is former military, the line works.

My other favorite line of Creasy's comes just before dispatching one of the kidnappers.  Creasy says to him, "It's off to the next life for you.  I guarantee you, you won't be lonely."   Then it is a point blank bullet to the head.  Creasy's acts of vengeance make Bryan Mills's trip through the French underworld seem forgiving.

My brother did not like the different tone between the adult/child relationship parts to the revenge filled second half.  I thought the film's weakest moment was in between.  It takes far too long between the kidnapping and Creasy starting to kill those responsible.  I know he gets wounded, but we also know where the film is headed.  There is no need to wait.  The movie is two and a half hours long as it is.

Denzel Washington was not the first choice for the role, but he does a remarkable job.  Like Liam Neeson in Taken, Washington's calm demeanor makes him all the more scarier.  He always seems in control, even when in the middle of chaos.  For such a liberal, I was surprised he played a role that encourages and demonstrates the value in torturing an enemy for information.

Except for Tony Scott trying to add art to an action film, Man on Fire works.  Scott added several scenes containing images of a wounded Creasy swimming in a dark pool with Pita.  I am all for a good symbolic gesture, but does a film that has a scene with a man having explosives shoved up his ass really need symbolism? 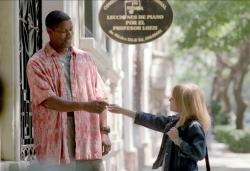 Denzel Washington and Dakota Fanning in Man on Fire.

On occasion my brothers and I have been known to completely disagree over certain movies (check out Auntie Mame as an example). Man on Fire, however, is one time when we are all in total harmony. It's a taut action/revenge flick with a decent script and a towering central performance from Denzel Washington. Tony Scott's direction is distracting and intrusive but it's unable to seriously mar the film.

Based on A.J. Quinnell's 1980 novel of the same name, Man on Fire was previously adapted for the screen in 1987 with Scott Glenn as John Creasy. Like the source material, that movie was set in Italy. I have not seen that film but I cannot imagine a greater interpretation of the central character than Denzel's.

He is destined for the pantheon of great Movie Stars. His charismatic larger-than-life presence combined with his considerable acting skills guarantee his status alongside the all time greats. The book's author was quite happy with this adaptation and with Denzel's work. He was pleased at the fact that they kept in much of the book's dialogue. Such as this quote from Christopher Walken's character, Rayburn, “A man can be an artist in anything, food, whatever. It depends on how good he is at it. Creasy's art is death. He's about to paint his masterpiece.” The author also said, “The film is violent and if the anger is not portrayed properly, the result can be awful.”

Therein lies the secret to Denzel's portrayal. Even when he is acting as a cold-blooded killing machine he takes no pleasure in it. He is more avenging angel than sadistic assassin. Eric brought up the fact that in real life Washington is a liberal and it therefore surprised my brother that he would play a scene where torture is used to obtain information. All I can say is not all liberals (or conservatives for that matter) are cut from the same cloth. Denzel is also devoutly religious. He's the son of a Pentecostal preacher and a gospel singer. He's a peace maker by nature. He refused to vocally criticize President Bush during the Iraqi War but instead would usually bring up his support and concern for our troops in interviews.

Eric also mentioned the film's symbolism. Another example is the name of the street where the main kidnapper lived. Via Appia (which doesn't really exist in Mexico City) was the road in ancient Italy where the 6,000 rebel slaves that followed Spartacus were crucified.

I see Scott's point about the story having two very distinct sections. I also agree that it could have been trimmed by a few minutes. But I was quite moved by the ending. Denzel and Dakota brought an unexpected tear to my eye. Man on Fire is a solidly entertaining movie and I have yet to see Denzel Washington give a less than stellar performance in any of his screen roles.