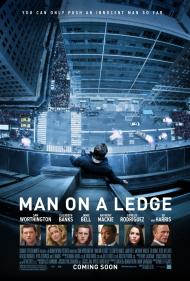 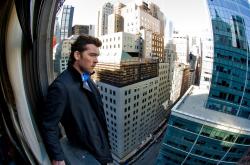 Sam Worthington is a man on a (you'll never guess) ledge in Man on a Ledge.

If you're going to name a movie Man on a Ledge and center the whole movie very literally around that title, then you should really have a better reason for the man to be there than the makers of this one provide. In fact, the question that popped into my head as I walked out of the theater was, "Why was he out on that ledge?" It really feels like someone had the idea of putting a man on a ledge and then tried to work backwards to figure out why he would be there.

Sam Worthington stars as Nick Cassidy, the man who spends most of the movie on the ledge outside a hotel room on the 21st floor of the Roosevelt Hotel in midtown Manhattan. He's a cop who was wrongfully convicted of a diamond theft. After escaping from police custody at his father's funeral, Nick checks into the hotel and climbs out on the ledge. As the crowd gathers in the street below, Nick's brother Joey and Joey's girlfriend Angie (played by the smoking hot Genesis Rodriguez) are breaking into a vault in a nearby building to prove that the diamond that Nick supposedly stole, actually is still safely stored there and the notion of the theft was merely an excuse for its owner, David Englander, to collect the $40 million insurance money.  The movie then plays out in two parts. Nick on the ledge talking to police negotiator Lydia Mercer (Banks) and Joey and Angie breaking, Mission Impossible style, into the Englander vault.

What Nick hopes to gain by standing on the ledge is never made clear. Why couldn't he have just gone in with Joey and Angie? And what is he hoping to gain by having them steal the diamond? He wants to prove that he didn't steal the diamond by stealing it again? His plan goes awry of course. It wouldn't be much of a movie if it didn't. If it had all gone originally as planned, what was his exit strategy? It's all just silly and full of holes.

The actual heist itself is straight out of Movie Cliches 101. The only thing missing is a criss-cross pattern of laser beams. Why would a tightly secured vault with every possible security precaution have a ventilation shaft leading to it that is large enough for a person to crawl through? Naturally it's so Angie can shimmy down it in a cat suit and then dangle from the ceiling to disarm the alarm system.

Despite the inanity of the plot, there are moments of entertainment. The pace is brisk (probably in the hopes you won't have time to question things) and the editing tight. There's not a huge amount of action, but it's filmed well.

A well known cast does a mostly good job. Worthington in the lead is actually the most dull. Almost anyone could play his part. Banks does a good job as the negotiator and Jamie Bell and Genesis Rodriguez look like they had a good time filming their portion. Kyra Sedgwick is wasted as the newscaster covering the story and the normally talented Ed Harris just seems irritated.

If you can suspend your disbelief, which will require a Herculean effort, there is some small enjoyment to be had. Not much, but it's there if you choose to look for it. It's just not really worth the effort. Certainly not for the price of a movie ticket. 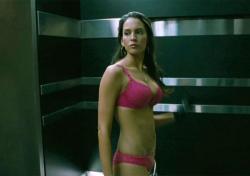 What to wear when robbing a high tech office building.

Scott, your question, "Why was he out on that ledge?"  Is a valid one.  As my son and I left the theater we discussed that very subject.  He stated that Nick was on the ledge to create a distraction from the explosion on the other roof top.  I made the point that since it was on the roof, the only people who could have possibly seen it would be people high up in other buildings, such as the police negotiator that Nick personally asked for.  Nick was so stupid in this set up that he even places himself in a location so that when the negotiator pokes her head out the window to talk to him, she is facing the same direction as the building being robbed.  However, if you look closely, she conveniently has her head down when the explosion occurs.  Now that is some awesome planning.

Man on a Ledge is fun if you want to play the plot hole game.  He never thought to get a room on the other side of the building?  Was bringing lots of policemen within a block of his brother robbing someone, really a good idea?  Although she looks good in her date night pink panties and push up bra, would it not have been more convenient for Angie to just wear that cat suit to the robbery instead of carrying it with her when she rappels down an elevator shaft and changing into it during a rushed robbery?  When the police try to get a finger print in the room, to discover who the man on the ledge is, none of them think to check the open window's pane, that he did not wipe off?  How do they think he got out there?  How was a bar owner/bartender able to fake his own death?  It would require the cooperation of many official people and the breaking of even more laws.

Pablo F. Fenjves has written many forgettable made for television movies.  This is his first screenplay to be released in theaters.  For his sake, I hope he still knows some television producers.

The famous cast made some easy money here.  There are no dramatic scenes that require any amount of serious emoting.  Other than Worthington, the camera never stays on anyone too long.  Ed Burns and Ed Harris could have filmed their parts in a couple of days.  Although the cast is filled with recognizable faces, any actor could have played any of these roles.

The one and only time an actor makes the slightest impact is when Jamie Bell does a dance spin in front of a camera, to prove it does not work.  It reminds the audience that he starred and danced in the vastly superior Billy Elliot.   Bell needs to remind us that he has talent, as Man on a Ledge and last year's winter release, The Eagle, are not films he can brag about.

Anthony Mackie as Detective Mike Ackerman in Man on a Ledge. Did he live or die?

Man on a Ledge is a cheesy, plot-hole riddled, cliché-filled, B-movie, heist thriller. As my brothers already pointed out, the reason Nick climbs out on that ledge is pretty stupid, as is the equally implausible burglary going on across the street. Like Scott said, who's brilliant idea was it to steal a diamond in order to prove you didn't steal it? I mean what was their original plan once the diamond was stolen? I don't see how turning it over to the authorities would prove Nick's innocence. “Oh, by the way here's that diamond that I didn't steal.” WTF!? (SPOILER ALERT) How fortuitous (not to mention convenient) that Nick was able to grab the diamond out of Englander's pocket right in front of thousands of witnesses and television reporters.

Eric, if they had gotten Nick's fingerprints off the window frame then they wouldn't have needed Mercer's cigarette trick. They had to give Elizabeth Banks something to do besides leaning out that window with a concerned expression on her face.

I laughed out loud when the explosion on the roof occurred and somehow went completely unnoticed by not only the hundreds of spectators crowding the streets below, but also by every cop on the scene, including Mercer who was close enough to have felt the impact for god's sake. I mean, the entire building shook briefly. And even if somehow no one noticed from below, surely someone in a nearby building would have seen it and called the police. I mean an explosion strong enough to blow a hole in the roof of a building would never go unnoticed in a city of 8 million people.

The cast does the best they can with the script, although every character is a walking cliché and the outcome is as predictable as they come. The pacing, editing and cinematography are quite good. The actors were really out on that ledge in most of the long shots. The harnesses they were wearing for safety were edited out of the movie in post production.

Another ridiculous moment occurs when Nick's ex-partner sneaks into the hotel room to talk to Nick out on the ledge. All the other cops know he's in the room yet when they shoot the lock off the door the guy is able to easily sneak past them and get back out of the room. This same cop turns out to be noble at the end and he takes a bullet for Nick on the roof. But the script doesn't tell us if he lives or not. In fact, this character is never mentioned again.

Man on a Ledge has all the ingredients for a rousing heist caper except for a central plot idea that makes sense.