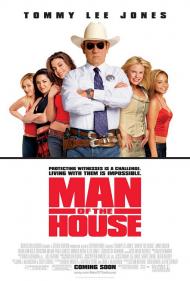 Many movies look better in the commercials than they do in their entire length. That is the case with Man of the House. All of the best jokes were ruined by having them appear in the previews, and there are not many good jokes to speak of.

Tommy Lee Jones plays a tough Texas Ranger, "Praise the Lord, and pass the ammo." who has to live with some college cheerleaders who are a witness to a murder. The idea is that he is there to protect them. But really it is all about him having a cathartic experience. By living with these college age girls he learns to better understand his own estranged college age daughter.

Cedric The Entertainer plays a character that is utterly meaningless to the plot, yet he garnishes most of the laughs. He is an ex-con who is now an obnoxious minister, who just happens to have also been a college cheerleader. It's coincidences like that, that make this world such an interesting place to live. Jones visits Cedric a few times in the movie to get information on his previous cell mates who maybe involved in the current murder. The information is next to pointless but every scene with Cedric brightens the movie.

While in the cheerleaders house, Jones sets strict rules about no socializing or going out without a police escort. He is so strict that he frisks the pizza delivery boy. However, all of the rules go out the window once he falls for a English Lit. Professor. Suddenly this tough, no nonsense cop is an incompetent, nervous suitor, who needs the flirtatious cheerleader's help on the date. Another scene that I found annoying, was when two of the cheerleaders sneak out to a bar to play pool. Both girls are dressed in skimpy clothes that scream "TAKE NOTICE OF ME!" However, as soon a guy takes notice of them, the girls get offended. Of course Jones shows up to protect them from the very attention they dressed for.

Man of the House has a few funny moments, like Cedric dancing and Jones's sarcastic delivery, "This is my happy face." They are hardly enough to make this movie worth the price of admission. 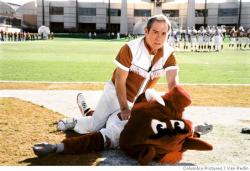 Unlike Eric, I never thought the previews to this movie looked funny, and so it lived up to my expectations, which were zero. I'll happily admit that the one reason I thought this movie might be somewhat enjoyable is that it contained a group of young, attractive women. However, sex and nudity is completely absent from the film, and any moments of titillation are so G-rated as to not be worth bothering. And so even that politically incorrect reason for watching was denied me.

The movie isn't helped by a plot that makes little sense. If they wanted to protect the cheerleader witnesses, then why would they put them back in their house instead of putting them somewhere in a safe house? Later, for no apparent reason, the bad guy abandons his getaway car, to catch a ride on a bus. This allows for something to happen in the plot, but is so obviously contrived as to be rendered stupid. Another subplot that makes little sense, is when one of the gorgeous, young cheerleaders develops a crush on weather beaten, 59-year-old Tommy Lee Jones.

Only one thing did surprise me about this movie and that was the fact that Tommy Lee Jones not only starred in the movie, he actually co-produced it. He must be going soft in the head in his old age, because he not only thought this material was good enough to star in, but also good enough to sink his own money into.