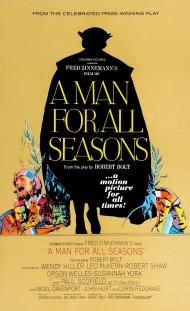 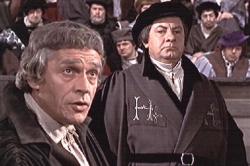 Paul Scofield and Leo McKern in A Man for All Seasons.

A Man for All Seasons won the 1966 Academy Award for Best Picture. It tells the true story of Sir Thomas More whose steadfast refusal to acknowledge the supremacy of King Henry VIII's Church of England over the Roman Catholic Pope eventually cost him his life. It is a story that, were it not historically documented, would seem unbelievable.

Paul Scofield gives a brilliant performance in the lead role. There isn't a false note from him in the entire movie. He very clearly demonstrates one man's dignified refusal to compromise his beliefs. To him the issue is a matter of his very soul's fate and he sacrifices everything to save that.

The rest of the cast is quite good as well. Wendy Hiller who plays Thomas' wife Alice is especially outstanding in the scene where she visits her husband in jail knowing it will be the last time she sees him alive. The supporting cast also boasts such names as Orson Welles, Robert Shaw and John Hurt.

Period movies usually focused on the glamour and pageantry of Europe centuries ago. It wasn't until the 1960's with movies like Tom Jones, A Man for All Seasons and The Lion in Winter that the coarser often downright disgusting side of life before modern conveniences was accurately portrayed.

A Man for All Seasons works best as a history lesson and as a morality tale. In fact I remember my 11th grade British Literature class watching it. It is entertaining because it is so well done, but it is not a story that begs repeat viewing. It very clearly shows how one man stood up for his beliefs at all costs, proving himself to truly be a man for all seasons.