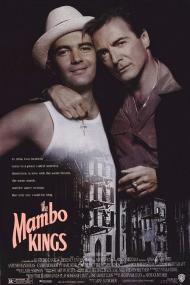 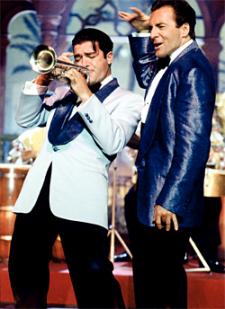 Other than the music, this movie blows.

The Mambo Kings is full of great 1950's Latin dance music. It is about love in all of it's many forms. It is about passion and how it is a blessing and a curse. However, the only thing it will be remembered for is that it was Antonio Banderas's first American speaking role.

In the 1950's, two Cuban brothers, Cesar and Nestor, come to The United States in hopes of hitting it big in the music world. Older brother Cesar, is the leader and the most music business motivated. The woman all like him and he knows it. Or as one admirer puts it, "He thinks he's the last Coca Cola in the desert." His signature prayer is, "In the name of the Mambo, the Rumba, and the Cha cha cha" His brother Nestor is a trumpet playing songwriter. He is also still in love with a woman back in Cuba, even though she has moved on to another man.

They play their music. They have relationships with woman. They have issues with some mobsters. One day they meet Desi Arnaz and he invites them to appear on the I Love Lucy show. They become a hit and they record an album. Everything seems to be working out, except Cesar has pissed off some gangsters and Nestor finds himself in a loveless marriage.

The Mambo Kings is about passion. Cesar is passionate about music. Nestor is passionate about a long lost love. The brothers have a scene where they tell each other that they love each other. Nestor's wife always looks longingly at Cesar. With all of this emotional emoting you would think that this movie would be better at engaging the audience. It does not.

Banderas and Assante do what they can but neither garnered any pity. Banderas is properly heart broken, but it renders him a bore. He spends the entire movie pining for a woman who only appears in flashbacks. Granted Maria is played by a James Bond girl, but Nestor is such a sap that his unrequited love is pathetic and not endearing in the least. Nestor is a complete fool. Assante just does not cut it as a lead actor. He looks to much like an Italian goomba. How anyone ever cast him as anything but a mobster is beyond me. He is not a bad actor. He just lacks leading man charm and star quality. It is no surprise that Banderas's star rose after this while Assante's tanked.