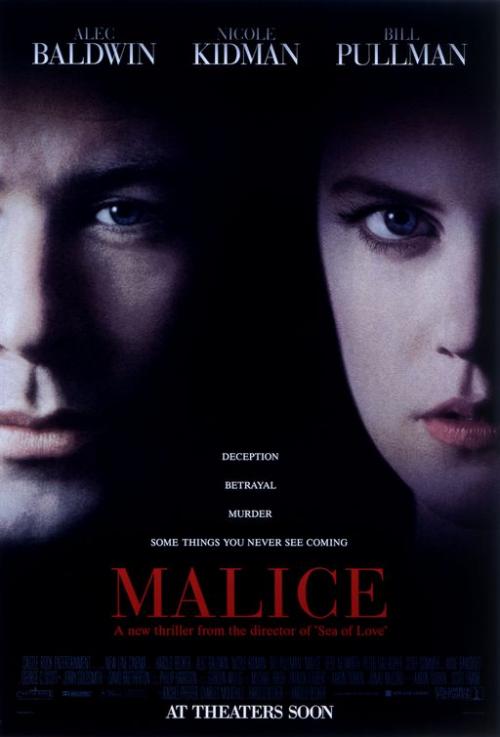 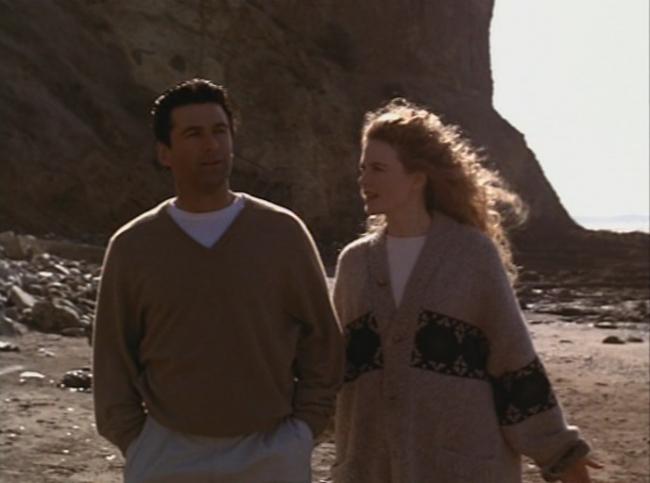 Directed by Harold Becker (The Onion Field (1979), Taps (1981), Sea of Love (1989)), Malice is a mystery, crime, thriller from 1993 starring Nicole Kidman, Alec Baldwin and Bill Pullman. It borrows elements from many other films and genres. In some ways it's an atmospheric neo-noir with Hitchcockian overtones. There are plenty of twists, turns and surprises along the way. Some of which you will easily spot from a distance while others are more unexpected. It's better not to think too long and hard about all of the plot details. Just sit back and watch a talented group of actors show off for 100 minutes or so.

Meanwhile Nicole Kidman is suddenly rushed to the hospital where Dr. Hill performs emergency surgery on her. She has a ruptured cyst on one of her ovaries and the good Dr. removes it. He also learns that she was pregnant at the time but the fetus is aborted due to the trauma of surgery. It later comes out that the doctor removed a healthy ovary and that Kidman is now sterile.

Naturally enough the newlyweds sue for damages, leading up to the film's most famous scene where Alec Baldwin gives a speech during a deposition about his own infallibility as a surgeon. It concludes with, “You ask me if I have a God complex? Let me tell you something: I am God.” Baldwin delivers this speech with the perfect inflection in his voice. He plays obnoxious and smarmy better than most and this is one of his most indelible performances.

From here the plot veers sharply to the left. Screenwriter Aaron Sorkin tosses in a fish tank full of red herrings but the story's biggest twist is fairly obvious. Undeterred, the script keeps the surprises coming right up till the final scene.

This is the movie that really put Nicole Kidman on the A-list. She's marvelously over-the-top, especially during the later scenes where she reveals her true colors. Like Baldwin she knows how to deliver a line. My favorite of hers is, “Ask God how many shots of bourbon he had before he cut me open.” She's out-hammed, however, by a decidedly unglamorous Anne Bancroft making a cameo as Kidman's estranged mother. She's the one who finally tells Bill Pullman the truth. Her last line to him is, “Welcome to the game.” Malice also includes a late career cameo by George C. Scott in the aforementioned deposition scene, and a 20-year-old, pre-stardom Gwyneth Paltrow gets a few lines in her one scene.

I hadn't seen this movie since I saw it in theaters back in 93. I remembered enjoying it then and I enjoyed it this time around too. It's aging well. Malice is a gloriously old fashioned mystery/thriller with two colorfully theatrical central performances from Kidman and Baldwin, both of whom spout plenty of quotable dialogue.