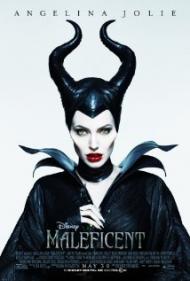 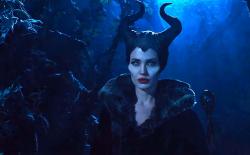 Of all the Disney Princesses, Aurora--aka Sleeping Beauty--is easily the most boring. All she has to do is look good, fall asleep and be awoken by a kiss. It hardly seems surprising then that when Disney decided to revisit this tale, they chose to focus on the most interesting character in the story, the evil Maleficent. The casting of Jolie is the perfect marriage between actress and part. Once you see her with those horns, in a dress straight out of the Norma Desmond collection, it's impossible to picture anyone else in the role. She's the reason this movie works as well as it does.

The plot is a revisionist telling of the classic fairy tale. Maleficent is given the Wicked treatment and we learn the reasons behind her villainy. This is a post-feminist telling of the story and the true villain is the King, the prince is a useless pretty face and true love's kiss has a very different meaning than it did in the original tale.

In this version, a young Maleficent is betrayed by Stefan, a social climbing young man whom she once had a teenage love affair with. Stefan tricks her, cuts off her wings, and then uses his vanquishing of her to become king of a neighboring kingdom. When Stefan marries and has a daughter, Maleficent shows up at the baby's christening and puts the famous curse upon her wherein on the baby Aurora's 16th birthday she will prick her finger and fall into a sleep like death, only to be awoken by true love's kiss. It's a bit of a silly curse, but then it was in the original story as well. Stefan packs Aurora off to be raised in hiding by three good fairies, and then proceeds to go mad with obsession and guilt. Maleficent, meanwhile, makes a sidekick out of a crow, and quickly discovers the location of Aurora's hiding place where she watches the young Aurora grow. Will she have a change of heart over her curse? And if so, will it happen before Stephen goes to war with her? These are the questions the movie asks, and even though it's pretty obvious what the answers will be, it's still fairly entertaining watching it unfold.

The film does have its weak points. Apart from Maleficent, we don't learn very much about any of the other characters. Stefan is a bit of a cipher and Aurora is fairly bland although Elle Fanning does her best with the weak part she is given.

During some of the film's darker moments it's almost possible to forget that this is essentially a children's movie, but then when the script tries for a lighter moment you are sharply reminded of that fact. The three fairies are a prime example of this and their silly antics fall flat as does most of the other attempts at humor.

The look of the film is fairly impressive and a tad reminiscent of last year's The Great and Powerful Oz. Perhaps not surprising when you learn that the director of this film worked as the Production Designer on that one, as well as on Alice in Wonderland, which also shared a similar design.

All of the various parts only add up to a mediocre film until you throw in Jolie. She is the film's best asset and fortunately she's in almost every scene. She not only looks the part, but she plays it perfectly. She's aided by the visuals, not only in that iconic black dress, but also early in the film when she does winged battle. Purists may not like the way her character was changed, but I don't know how anyone could disparage Jolie's performance. Reportedly she sought the role, coming out of a min-retirement that saw her not appear on film since 2010's The Tourist. Her performance and appearance more than makes up for the film's weaknesses.

Although obviously the filmmakers were aiming for a film suitable for all ages, I was left wishing that they had gone down a darker route with a more adult fantasy. It flirts with that darkness, but ultimately shies away from it. Still, thanks to the casting of Jolie, I was able to find much to enjoy in this version. 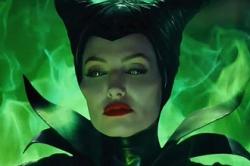 I concur that Jolie is splendid as Maleficent. Still I'm not quite sure this story was ripe for revisiting. It was a simple little fairytale that had already been done quite nicely by Disney more than half a century ago. Scott mentioned Wicked with its revisionist take on The Wizard of Oz, and that clearly seems to be the biggest influence on Maleficent. As Wicked did for the Wicked Witch of the West so the changes they made to the story here are pretty much all intended to make Maleficent more sympathetic.

It's her movie so that's all well and good, but this also means the story needs a different villain, and they chose the king. If only they had spent a bit more time developing his motivations. His transformation from being Maleficent's childhood companion and puppy love to being a cruel and avaricious person willing to destroy those he loves to further his own ambitions is quite sudden and unexplained. We are given no hint as to why he is this way.

As great as Angelina Jolie is in the part (and she is perfect in the role) the titular character is written unevenly. Her powers are never fully explained and they seem inconsistent at times. In one scene, for example, she has the ability to move the king's soldiers around in the air at will, easily overpowering a group of them, yet she is supposedly unable to fly without her wings. If she has the strength to make all these grown men float about simultaneously in the air against their wills, why can't she make herself float?

Perhaps the biggest change from the 1959 cartoon is the climax. It diminishes the power of the character. SPOILER ALERT: Instead of Maleficent herself turning into a dragon, here she merely transforms her shape-changing sidekick into a dragon. This is her big moment in the story where her true powers are finally on full display and they took it away from her. I was disappointed.

What they got right was the overall visual style of the movie. This is how every enchanted kingdom should look. Of course Angelina Jolie is getting most of the credit but the supporting cast is quite good. Some of them seem as if they were picked for their resemblance to the classic cartoon. It's almost uncanny how Brenton Thwaites is the very picture of Prince Phillip (and he clearly wasn't chosen for his thespian capabilities). And the three good fairies are all dead ringers for their animated counterparts.

Maleficent is meant to show that there's more than one version to any story. It features one of the greatest movie stars of this generation in the iconic role she was born to play. The mother/daughter bond between Maleficent and Aurora is quite touching but I still prefer her as the supremely arrogant diva-villainess she was in 1959. I do give credit to the filmmakers for attempting something different, rather than just remaking Sleeping Beauty. Call me old fashioned but I like my villains simple and uncomplicated. I didn't need to know Darth Vader's back story and ditto Maleficent. Give me the sly cruel bitch over the misunderstood wounded victim.

Maleficent continues Disney’s recent assault on the tried and true fantasy of love at first sight and that all women need a man to rescue them. As Scott noted, Prince Phillip is merely here to look cute. In the original film he hacks through the vines, and battles Maleficent in order to give Aurara his spell breaking smooch. Here, although he makes an appearance, he plays absolutely no role in the story what-so-ever. I did not find the curse to be silly as it relates to why Maleficent is so bitter.

Stefan is definitely a cipher. I agree whole heartedly with Patrick that they should have spent more time on his motivations. All we learn is that he lived in a barn and likes to hang out with Malificent. We needed only one brief scene where he sat with Maleficent early on, and told her of his desperation to be rich. At least that would have provided some foreshadowing and hint as to why he turned out the way he did.

I, of course, agree with my brothers on Angelina Jolie’s performance. As a world famous movie star and tabloid staple, she knows how to pose and present herself as a diva, commanding everyone’s attention. She is also good in the subtle moments where she makes small gestures or mere glances. Her real life status and reputation helps us to accept her as a larger than life self-centered witch.

I like that Disney is giving their female characters mature makeovers but they have gone from making men the hero to making men the villain. In Frozen it was a greedy Lord pretending to be in love with the princess, while here the Prince is pointless and the King is pure evil. How about Disney revising some of these stories from the guy’s perspective? I want to know why a prince, who can get any girl in the land, would be impressed by some chick he just met in the woods or at a ball. The boys in those old Disney films were given even less personalities than the girls.