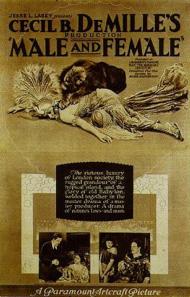 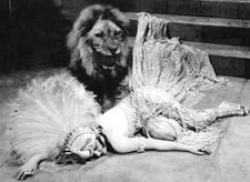 Gloria Swanson in Male and Female.

The potent combination of Cecil B. DeMille and Gloria Swanson first burst upon the movie scene in 1919. Male and Female was their third movie together.  Based on the play 'The Admiral Crichton', Male and Female tells the story of the upper crust, British, Loam family. Mary Lasenby (Swanson) is the pampered eldest daughter, accustomed to giving orders, even down to the exact temperature of her bath water. Thomas Meighan is Crichton, the strong, silent butler, with a penchant for poetry, secretly in love with his spoiled mistress. Lila Lee is the lowly chambermaid who completes the love triangle by openly worshiping Crichton.

The Loam's world is turned upside down when they are stranded on a desert isle while on a yachting excursion to the south sea's. Life on the island turns out to be the opposite of that in civilization. Crichton quickly takes charge, being the most suited for survival in the wilderness. Soon he is the undisputed king of the seven stranded castaways. If that sounds familiar it is because the popular sixties sitcom Gilligan's Island was most certainly influenced by this classic silent movie.

Here in this island paradise the formerly pampered heiress and the chambermaid fight over whose turn it is to serve their lord and master, while the former master of the house and his son, youngest daughter and future son-in-law, stand by watching in fear. Crichton, of course, chooses Swanson and soon they are in love. But not before he must rescue her from a marauding leopard near the old ruins, where she has gone to pick figs for his dinner. It is here that DeMille inserts the movie's most extravagant and famous moment; an ancient Babylonian flashback sequence in which Crichton is the king and Swanson a Christian slave thrown to the lions. Exactly what a Christian slave was doing in ancient Babylon only DeMille could say.

Male and Female cemented Gloria Swanson's status as an international star. Her beautiful eyes and uncanny ability to wear clothes fascinated audiences. For the next half dozen years she was the undisputed Queen of Hollywood.

Cecil B. DeMille, the master of excess and opulence, had made history in 1914, when his The Squaw Man became the first feature length movie ever produced in Hollywood. He continued directing for more than forty years, culminating with his remake of The Ten Commandments in 1956.

The island scenes for Male and Female were shot on the then pristine shores of Catalina Island. This one is a masterpiece in the fact that it is both high camp and a profound statement on the human class struggle and the eternal battle between the sexes. 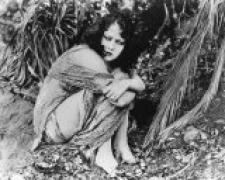 Gloria Swanson in Male and female

Although the title would have you believe this is a movie about the battle of the sexes, it is in truth, a film about the relationship of those in power and those who are not. At first, the rich are shown as spoiled and picky. Later, when the butler is in charge, he becomes much the same way, expecting to be waited on. When the rich are paying the salaries, they are in charge. When the butler is supplying food and shelter, he is in charge.

Male and Female has several different love stories going on at once. All involve a rich person and a servant becoming romantically involved. What surprised me about this film is that it does not sugar coat just how difficult that is to make work. A rich friend of Mary’s becomes the wife of her own chauffer. Her family disowns her, and her new husband is uncomfortable around her wealthy friends. The final message of the film is that some people will chose the status quo, over love.

This movie has plenty going for it, but it is hardly perfect. It does not take Mary, and company long to learn how to survive and thrive on the island. Mary goes from being a girl who needs the help of two servants to simply bathe, to a bow and arrow hunter, who can proudly bring home a fresh kill. She goes from seeing Crichton as a butler, to her fiancé, but then denies her feelings once back in England. Crichton does the same. Neither can break from their class roles. What they learned on the island ends of being moot.

I came away from this movie with a real appreciation of Gloria Swanson as an actress. She was right about what she said in Sunset Blvd. She says so much with her eyes. A mere glance, or a facial twitch and she spoke lines of dialogue. When she is first stranded on the island, and her hair is hanging down, she is also quite attractive. Every other girl in the movie pales next to her.

Where as Patrick loves Demille’s extravagance, he needed to trim this film. At two hours, it runs a bit long. Most of the title cards should have been deleted. They are mostly poetic, and unnecessary to the plot. The famous scene of Swanson in the dream sequence is nicely over the top, but is just a chance to needlessly camp up the movie.

Male and Female has influenced such films as Saturday Island, in which a male marine corporal, Tab Hunter, and a female Officer, Linda Darnell, end up alone on an island. In Swept Away, spoiled rich girl, Madonna, ends up begging her former employee, once they get stranded on an island, as she is helpless. Neither is as good as Male and Female. 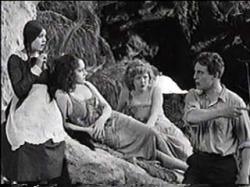 You can tell that this is based on an English story and not an American one. If it were an American story it surely would have ended on a happy note with a love conquers all theme. Instead it ends as it did in the 1902 play by J.M. Barrie of Peter Pan fame, with the two lovers separating and returning to their station in life to marry someone who is their social equal. No Edwardian English tale would be allowed to end any other way.

The more silent movies I watch, the more I appreciate Buster Keaton. He was known as the Great Stone Face because he lacked emotion in his films. From what I've seen though, this simply isn't so. He shows emotion, but in a much more natural way compared to the other actors of the time. They're mugging for the rear stalls, as they do in this movie, while he seems to know that the camera will do the work for him.

Eric, you praise Swanson's acting, but she's as hammy as the rest of them. "She says so much with her eyes," you say and I do agree, but it's not with a mere glance or a facial twitch. She's going to town with her emoting. Granted, it is a better performance than from films even just five years before, but it's still not exactly subtle. She does look more attractive with her hair down and in the island savage dress.

I do agree with you Eric that this movie needed to be trimmed. It could have begun on the boat where we could have seen the Loams being just as spoiled as they were at home. At the very least we should have gotten to the island faster than 40 minutes into the story. And the Babylonian fantasy sequence is unnecessary spectacle.

I also agree that the title of the movie is misleading. It has more to do with class distinction than it does with any gender differences. I assume the title was changed because there had already been a film adaptation called The Admirable Crichton, which was the name of the play, and DeMille didn't want his named the same.

With a tighter edit job I might have been willing to call this a masterpiece, but not with so much excess to bog the story down.