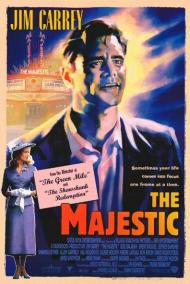 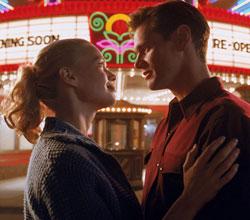 Laurie Holden and Jim Carrey in The Majestic.

Capraesque, The Majestic tells the story of a young, naive, screenwriter (Carrey) who suddenly finds his career on the rocks when he is named as a possible Communist, in 1950's Hollywood. Depressed, he gets drunk and drives up the coast of California. A car accident leaves him in a small idyllic town, with amnesia, where he is mistaken for the dead son of the local theater owner. Together with his 'father', he rebuilds The Majestic Theater and also the town's spirit. His real life catches up with him though, when the Feds, believing his sudden disappearance to be an admission of guilt, catch up with him and take him back to L.A. to face a Senate hearing.

At best this movie is sweet and funny. At its worst it is hokey and unbelievable. I admit that right up until he regains his memory, I was enjoying this movie. Near the beginning there are several old-time Hollywood references and in-jokes which I laughed at. And the town he winds up in is one of those places where everybody knows everybody, where the pace is snail slow, and seems the perfect place to live, especially in these stressful times. But after he regains his memory and returns to Hollywood, the schmaltz level goes through the roof. His speech during the hearing is so over the top that it completely negates any 'message' he might be trying to convey.

Poor dialogue and speechifying aside, Jim Carrey gives another great performance here. He has proven in various movies in his career, that he is an actor to be taken seriously, and not just as a comic. However, this movie is not the vehicle which will grant him the respect as an actor he deserves.

A nice attempt at recapturing Capra, but one that ultimately falls far short of its goal. 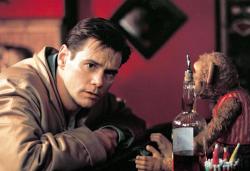 Jim Carrey in The Majestic.

The Majestic has a completely unoriginal set up. The return of a missing soldier who ends up being someone else is right from Sommersby. During the Communist Hollywood witch hunt scenes I kept expecting to see Katie from The Way We Were jump out and spout some political opinion. And most importantly, just how over used is the amnesia plot device?

Scott is right that the movie falls apart at the end, but he is wrong on one point. The speech is not over the top. The reaction everyone in the movie has to it is. The best part of any movie is the point where the audience feels the same emotions as the characters in the movie. You feel sad when the character cries or you feel your heart swell as lovers are united. The speech, that moves an entire room to a standing ovation and an entire town to forgiveness, is nothing more than Peter holding up a medal earned by a dead soldier and reading part of the constitution about free speech and assembly. It is not an emotional scene. The director plays it up as if it is some soul changing experience. The entire scene is so over played that I watched it twice just to see if I missed something. I didn't. It is an empty attempt to drag an emotional response from the audience.

Twice in the movie, there is a scene where screenwriters are discussing how to end a movie they are writing. Well, I think this movie should have ended with Peter discovering that he is in fact Luke. His life as Peter was the false life. Far fetched you say? Is it really any more farfetched than an entire town thinking this guy is someone else? Is it any more farfetched than a father not recognizing his own offspring? Is it any more farfetched than a man having amnesia for two months with out ever thinking to check birth, health, or dental records to try and verify if it is really he? If the director took my ending, the audience could have at least felt the joy of the characters finally experiencing some relatable emotions. As it is, you end up watching two hours of an amnesia period piece love story, whose big climactic ending is an overreaction to political rant. 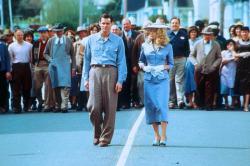 Jim Carrey and Laure Holden take a stroll while the entire town follows in The Majestic.

Frankly I'm a bit baffled by my brothers' overly negative reaction to this movie. I thought it was a nice homage to Frank Capra as well as to old time Hollywood and small town America. I loved the many references to old movies. The picture begins with a shot of Grauman's Chinese Theater. As the camera pans across the fabled courtyard we hear a woman's voice call out excitedly, “Oh look, there's Gloria Swanson!" The camera then continues into the theater where a (fictional) sword and sandal epic called Sand Pirates of the Sahara is showing. It's a great way to start the movie.

We then meet young up and coming screenwriter Peter Appleton. He's excited to see his name on a movie poster for the first time. His journey is straight out of a Capra picture. It involves Red-baiting, amnesia, and mistaken identity. It culminates at a congressional hearing. Along the way we get many references to classic movies.

The famous courtroom scene from The Life of Emile Zola is quoted at one point and in my favorite old movie reference The Big Parade is being shown at the titular movie theater. It is the famous scene where the lovers part and Martin Landau's character explains to Peter (whom he believes to be his missing son Luke) that it was the first movie they ever showed at the theater back in 1925 and that it was Luke's dead mother's favorite motion picture.

I also don't understand Scott's and Eric's dislike of the climactic scene. It isn't really about the exact words Peter says but rather the emotional impact comes from the fact that he stands up to injustice. The fault of the scene isn't with the script but rather with Jim Carrey. He is a brilliant comic and a decent dramatic actor but I'm sorry he is no Jimmy Stewart. This scene is a blatant rip-off of Mr. Smith Goes to Washington and Carrey imitates Stewart but is sorely lacking his depth of emotion.

The ending is corny as hell, but so was Capra. The Majestic isn't a great movie but it is evocative of a simpler, more patriotic time in our nation's history. And on top of that it is a joyous celebration of The Movies. Come on Eric and Scott, surely it's better than either of you gave it credit for being.