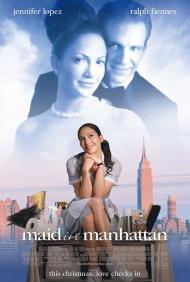 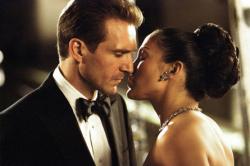 Ralph Fiennes and Jennifer Lopez in Maid in Manhattan.

Maid In Manhattan takes two opposites and attempts to attract them. It fails miserably. The British Fiennes plays an American playboy politician. Lopez plays a single mother Latin American Maid. They are opposites and they generate no chemistry.

While working in a posh Manhattan hotel, Lopez tries on an outfit of one of the hotel guests. She runs into Fiennes, who assumes she is staying at the hotel and not working at it. They go for a walk and a talk. She walks her son while he walks his dog. Her son steals every scene he is in. He loves politics and can interview Fiennes' politician as well as any Fox News correspondent.

The movie has the traditional wow scene. The scene that has been in almost every romantic comedy since Julia Roberts told Richard Gere "You're late." Then he responded "You're beautiful." Then she said "You're forgiven." In Maid In Manhattan the scene is a party and Lopez walks in all gussied up and turning nearly every mans head in the room. Yeah she looked good. However, this movie never gives any reason for Fiennes to fall for Lopez, other than she looks hot.

This movie follows the usual romantic comedy plot. A couple meet under humorous conditions. They court. They sleep together. They break up. They get back together, sort of. The ending is the one area where this movie goes for originality. It should not have. The big plus in any romantic comedy is that at the end of the movie the audience knows that the couple is going to live happily ever after. This movie ends with them reconciled, sort of. As the credits roll you see covers of magazines explaining what happened to the characters after the movie ended. One cover shows Lopez and Fiennes with a caption that says something about them doing okay after being together for a year.

When I watch a romantic comedy, I want the frigging story book ending. The one where the gorgeous couple end up happily frigging after. They go off into that Hollywood sunset to face a perfect stress free life together. This movie ended more ambiguously than Marilyn Manson's sexual preference.