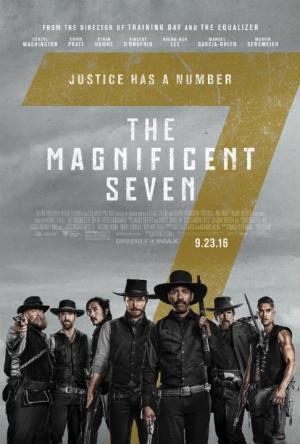 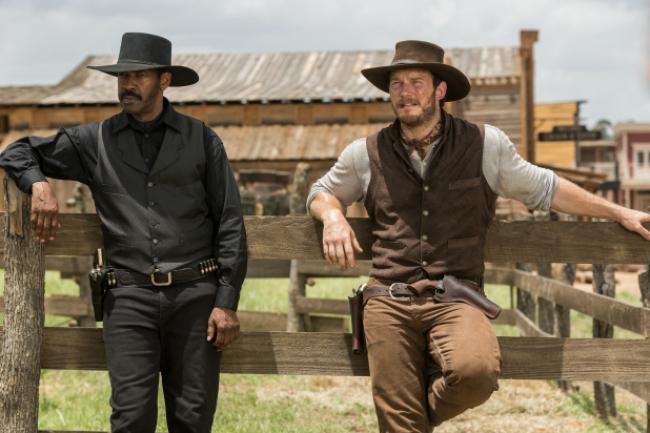 Denzel Washington and Chris Pratt in The Magnificent Seven

As a fan of the original Magnificent Seven, I was anxious to see what a fine director such as Antone Fuqua and a cast lead by Denzel Washington and Chris Pratt would do with such an iconic story. The first and most notable difference is the villain. In the 1960 version, some American cowboys head south of the border to help the residence of a small Mexican town fend off a group of bandits that regularly rob and pillage their village. It was who America was at the time. As in the World Wars and Korea, we were a country proud to send soldiers to foreign places to protect and save them from invaders.

This version seems even more politically charged. Instead of a marauding gang of Mexican criminals, the villain here is a rich, greedy white man, who even gives a speech where we hear the word, "capitalism" thrown around like a threat. He is trying to force the good people of a small western town to sell their property to him at a very low rate. The movie starts with him intimidating the towns folk by killing several of them in broad daylight. Considering how absent real law enforcement is in this film, the rich guy should have just had his henchmen put a gun to each land owners head until they signed their land over to him. If he thinks nothing of killing innocent people in front of dozens of witnesses, why not just force them directly, instead of giving them three weeks to decide?

Not only is the bad guy a horrible stereotype, the collection of heroes has been made pointlessly diverse. The original cast featured actors from many different countries but all were Caucasians, while here we have three European Americans, an African American, a Mexican, an Asian and an American Indian. I am not offended by this mixed stew but it does nothing to improve the film. It just makes it look like the politically correct police did the casting. Also, the only woman with any amount of scenes in the original film was simply around for a side plot about falling for one of the cowboys. Here we have Emma (Haley Bennett), who dresses like a frontier prostitute and shoots like Annie Oakley. Seriously, any woman who showed that much cleavage in a church in 1879 would have been sent packing to the saloon.

Emma, wearing an off the shoulder breast accentuating, cleavage revealing bodice, collects Chisum (Washington) and the six other men to protect her town. As they arrive, they are confronted by a dozen men who work for the rich guy. The seven gun fighters easily kill them all, somehow knowing this will bring an army down on them, led by the evil capitalist, himself. Yeah, the basic plot is, so far, the same as the original but here is where it all falls apart.

Spoiler alert: the movie ends with a town full of lots of dead bad guys as well as some dead good guys and some dead townsfolk. I will make a random guess of about one hundred people killed in this shootout. Now here is the rub. We find out that Chisum has a history with the rich guy and wants more than anything in the entire world to see him dead. This plot point was not in the original for good reason as it makes no sense. If Chisum has always wanted to kill him, why did he wait for Emma to ask him for help before doing it? The bad guy's name is all over the place. He would not have been hard to find. And try this on for size. Instead of waiting at the town for the big battle, where Chisum acknowledges that lots of people will die, including innocent ones, why didn't Chisum just assassinate the rich guy in his home? Without him to pay his henchmen, they would have all gone away and no innocent person would have gotten shot and this town would not have thousands of bullet holes to patch up. With so much death and destruction, no one is truly the victor.

The original film ended with several of the seven dead. That may sound like a downer but those men of poor reputation redeemed themselves and saved their souls by doing selfless acts for strangers. Here their motive is vague. They all agree to do it for a satchel full of an undisclosed amount of money and one briefly mentions a gold mine but we really never get a sense of why these men are willing to die for something that has nothing to do with them. Then comes Chisum's reveal, which sort of makes him a bad guy for using these innocent people as bait, just so he can exact his own personal revenge on a single man.

Washington moves on screen with amazing gravitas. You know Chisum is a bad ass just by how Washington carries himself. Pratt shows off his trademark witty charm but his scene with the stick of dynomite is over the top. Hawke is given the most characterization as a former soldier suffering from PTSD. Lee plays his loyal friend who does little more than back him up and throw knives. D'Onofrio runs with his mountain man character, using a voice you would not expect to come out of his body. His first scene is a hoot. Sensmeier plays an American Indian who joins them for reasons never explained. His face is often painted up in ways that we might see in a comic book and done by a professional, not a man alone looking at his reflection in a crick. Garcia-Rulfo is the last of the seven. His role only seems to be to take crap from Pratt for being Mexican and pose. Did any cowboy ever look so cool reclining against a post?

Westerns are a film genre we do not see much of these days. There seems to only be so many stories you can tell about the old west. The Magnificent Seven has enough action to keep you watching but it does feature such western cliches as the robber baron baddie and the one on one show down in the middle of town. I am sure you can guess by now that I prefer the original and I was reminded of that when the end credits began to play Elmer Bernstein's catchy original theme music. 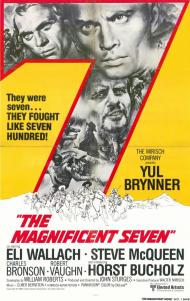