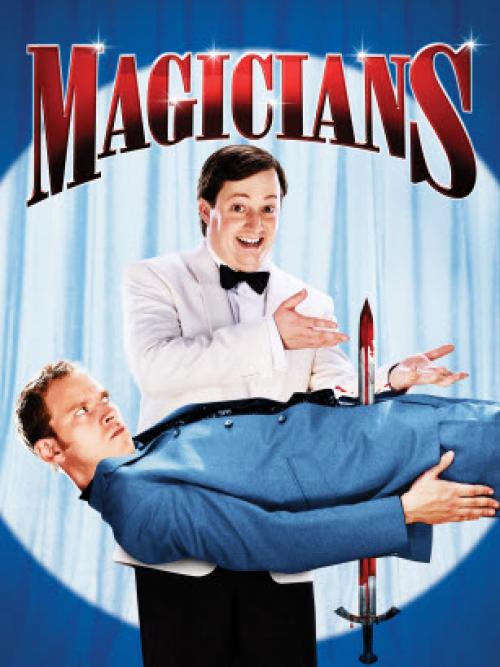 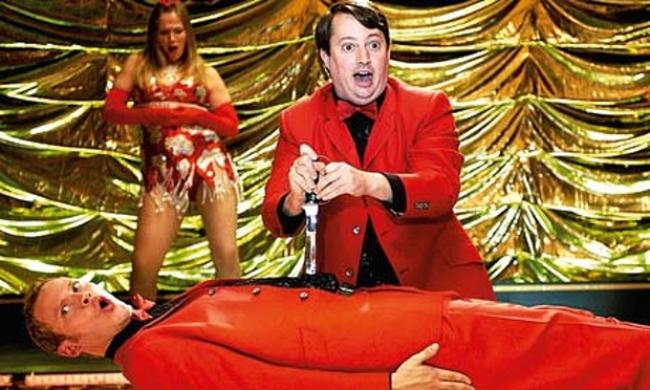 The double act of David Mitchell and Robert Webb are well known in the UK for their roles on the award winning sitcom, Peep Show. They've also written and starred in their own sketch show on radio, stage, and television. So far, Magicians represents their one and only film together. Written by the same team who created Peep Show, the film found limited success and only mediocre box office. While it's true that it's not exactly groundbreaking, it is an amusing little film, particularly for fans of the comedy duo.

Mitchell and Webb star as Harry and Karl, the magicians of the title. When the film opens they are partners, but after Harry catches Karl having sex with Harry's wife and Harry accidently decapitates her in a subsequent magic accident, the duo part ways. Four years later the duo attempt a reconciliation in an attempt to win a magic competition. When they discover that they still can't work together, they end up competing against each other, along with a cast of other colorful characters.

As on Peep Show, much of the humor comes from eccentric characters saying inappropriate things. Steve Edge as fellow magician Tony White, with his constant proposition to any woman who will listen to, "Suck my wand." is the perfect example. Darren Boyd as Otto, Karl's manager, who refuses to admit his feelings for Karl is another. They, along with several other smaller parts, provide plenty of the humor. Current Doctor Who star, Peter Capaldi, is a scene-stealer as the emcee of the competition.

Neither Mitchell and Webb have much range, or at least haven't demonstrated it yet. They continue to play their stock characters here. Mitchell is the uptight, more timid partner, while Webb is the more freewheeling adventurous one. It's an odd couple pairing that has worked for them in the past, perhaps exemplified in its simplest terms during their run as the Mac and PC characters in the British version of those famous Apple commercials. It's a formula they don't mess with here.

At less than 90 minutes the film has the benefit of brevity. The whole thing is played very lightly, with no other purpose than to provoke laughs. Some of the jokes are at the expense of stage magicians, but it falls short of satire.

Although Mitchell and Webb have done better, more daring and original work, this movie isn't without its charms. Any fans of theirs will undoubtedly get a kick out of seeing them in a full-length feature, but even those who've never heard of them should at least find a few things to laugh at here.