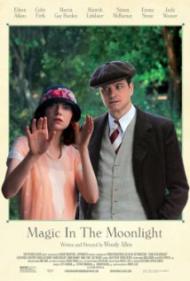 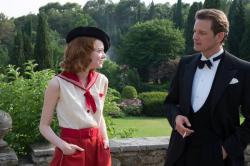 Colin Firth with his daughter date played by Emma Stone in Magic in the Moonlight.

As reliable as clockwork it's time for another movie from writer/director Woody Allen. Instead of the high drama of last year's Blue Jasmine, which won its star Cate Blanchett an Oscar, Allen has delivered a lightweight period comedy. It's not one of his best, but it's not without its charms, which are helped by its likable cast.

Colin Firth stars as Stanley, a famous magician in 1928 who works under the stage name of Wei Ling Soo. At the beginning of the story he receives an invitation from Howard, an old friend and fellow magician, to travel to the French Riviera where Sophie (Emma Stone), a supposed medium, is residing with a wealthy family. Howard asks Stanley to help him prove that this young girl, who claims to have ties to the spirit world, is a fraud before she can swindle the family out of a fortune. Stanley, who is quite the cynic, at first delights in the chance to expose Sophie, but instead he finds himself falling under her spell, unable to discover an explanation for her powers other than the supernatural. He also, against his better judgment, finds himself falling for her in a more personal manner.

Firth makes a charming leading man who, for once in a Woody Allen film, doesn't seem to be trying to channel Woody. He's quite dapper and well suited to the elegance of the era, seeming quite at home in the clothes and the cars and with a cigarette always to hand. Likewise, Emma Stone shows off her charms in a series of beautiful period dresses. Her red hair and enormous eyes are a match for the clothes and she seems to have stepped out of the pages of something written by F. Scott Fitzgerald.

Unfortunately, while independently they make a great couple of leads, together they make very little magic in the moonlight. A large part of the problem is the difference in their ages. Firth is 53, while Stone is just 25. Perhaps Allen, with the 37 year difference in his own marriage, sees a 28 year gap as practically the same generation. Beyond the age difference though, there's just a notable lack of romantic chemistry between the two. They are amiable together, but they never create any sparks. Firth is playing the uptight Englishman, which provides some laughs, but it too works against the romance. They have a few nice moments, but this is not a great love affair.

That the film is still enjoyable is to its credit. The humor is light and pleasant and breezes by at less than 90 minutes. It's true that the plot is stretched fairly thin. It feels more like a short story than a novel, but the scenery and the cast help cover some of the plot's thinner points. Eileen Atkins, as Stanley's Aunt, also helps things along.

In the end this may just be a pleasant little trifle; a minor entry in Woody's canon, but it's diverting enough and certainly better than some films he's made. Not the strongest of endorsements perhaps, but fans of Woody's will find things to enjoy. 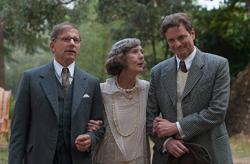 Simon McBurney, Eileen Atkins, and Colin Firth in Magic in the Moonlight.

Like clockwork indeed. Magic in the Moonlight is the 43rd original theatrical feature written and directed by the Brooklyn born auteur. Like the first day of summer his movies are an annual tradition. The last time a year went by without one of his films being released was back in 1981! And the man is already at work on his as yet unnamed film for 2015.

Now when you're a man with as many ideas as Woody Allen has, some are bound to be better than others. Magic in the Moonlight may be nothing more than a pleasant little trifle but it's still better than most of the crap currently filling theaters. And the sight of those white on black Windsor typeface credits set to the tune of some old-timey jazz standard remains comforting in an ever changing world.

These days nobody does the 1920s-1940s period better than Allen. Setting this one in the 1920s, when interest in the occult was high and people were more gullible, was a stroke of genius. It really wouldn't have worked in any other time period. And the French Riviera makes the perfect romantic backdrop for the story at hand. The period clothes, houses, parties, automobiles, etc., all add to the film's wistful urgency.

Colin Firth is quite good as the egotistical, cynical magician. As Scott mentioned, he works under an Asian stage name, donning yellow face and sporting a Fu Manchu type mustache. He plays the Allen character without, as my brother wrote, imitating Allen as most previous actors have done. The things he says are very Allen-like but spoken with a British accent, and he projects a debonair charm that Allen himself could never pull off. Yes he's quite a bit older than Stone but it isn't enough to be any sort of problem.

Emma Stone brings her cute as a button shtick to the proceedings. Although anyone who's seen many Allen films will easily guess the truth about Sophie, the script does a fairly good job of keeping it up in the air. Stone melodramatically gazes up to the heavens, or puts her hands over her eyes, while channeling spirits or peering into the future. The more she acts like a fraud the more her nonchalance about her “gift” makes it all seem somehow believable.

I do agree with Scott that the two leads, while both good in their roles, don't exactly create sparks together. The problem is with the script, not the actors. It seems Woody remembers funny better than he remembers romance.

Faith is the theme of Magic in the Moonlight. The existence (or not) of a higher power has always been one of Allen's favorite topics. Stanley, due to his attraction to Sophie, is blinded into questioning his own beliefs about the spirit world and the possibility of a deity. The scene where he is outside the hospital room waiting for news about his aunt (the great Eileen Atkins), is his moment of truth. It is classic Woody Allen.

Magic in the Moonlight isn't awfully original and it lacks a romantic spark but, like a cool breeze on a hot day, it provides relief from the blistering onslaught of sequels, remakes and comic book movies currently filling cineplex's around the country. 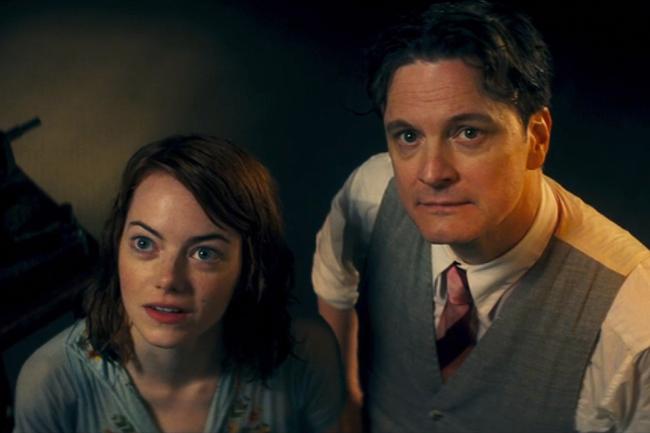 I could not agree more Patrick, Magic in the Moonlight is not a perfect film but it is a refreshing change from both action packed CGI films as well as deeper movies that require analysis. The delightful cast and gorgeous setting make for a light hearted travel through time to a tranquil location where lazy days are spent swimming or strolling through a sun soaked garden, decorated by exotic flowers. What a splendid way to spend a summer.

I also agree with Scott about the age disparity and lack of chemistry between Colin Firth and Emma Stone. They are more like a teacher and student or uncle and niece than potential lovers. Allen placed Stanley and Sophie in beautifully intimate locations such as a rocky beach, a rainy road and a night spent in a planetarium. All of these scenes are presented as romantically magical but there was never any sexual tension to speak of. At no point was there ever even a hint of sexual interest from either one in the other. With such a lack of passion, Sophie may as well have been spending time with her father.

The only real friction in the film is that Stanley is a pessimist while Sophie, a gal from Kalamazoo, is around to provide people with hope and comfort.  Firth has such lines as, “When the heart rules the head, disaster follows.” And “You're born, you commit no crime, and then you're sentenced to death.” Sophie calls them his, “Pessimistic grumblings about how awful life is for all of us.”

The best exchange is when an angry Stanley tells Sophie as he is walking away, “I can't forgive you, only God can forgive you.” Sophie responds, “But you said there is no God.” Stanley turns back and states, “Precisely my point.” The film presents a mild debate of whether it is better to know the truth even if it makes you miserable or believe in something false that makes you happy.

Patrick mentioned Woody Allen using jazz over his credits and that type of music is perfect here. Set in the 1920s, he filled the soundtrack with such standards as “Thou Swell”, “I’m Always Chasing Rainbows”, “The Sheik of Araby” and, of course, “Charleston.” With this music, the coast of France and some classic roadsters, I found myself transported to a place and time where people of leisure were in need of a distraction of the supernatural.