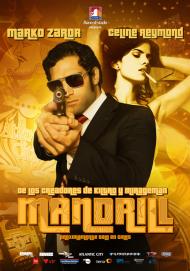 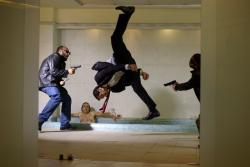 Marko Zaror doing his own stunts in Mandrill

Mandrill is an action film/love story with a decent sense of humor.  This movie from Chile moves at a quick pace, fueled by karate kicks and satire.  It plays by it's own rules, which makes for a sometimes off-the -wall comedy and an ending that needed clarifying.

Antonio Espinoza is a hitman known as "Mandrill," who works for big bucks.  The film opens with him looking for a man named Waldo.  Yes, he says, "Where's Waldo"  several times to several people.  Espinoza witnessed his parents being murdered as a young boy.  Think Bruce Wayne, only it happened in his home instead of a back alley.   His goal in life is to find and kill the man who murdered his parents.  This takes him to a casino in Lima, Peru where he meets and falls in love with his parent's killer's daughter, Dominique.

Espinoza was raised by his Uncle.  At one point as a child he asks his uncle about his dad, who explains that his dad was like John Colt, a fictional Chilean action film star from the 1970s.  Espinoza grows up emulating John Colt,  working out and dressing like him.   He has John Colt movies posters on his wall.  One of which looks suspiciously similar to For Your Eyes Only.  His uncle gives him advice on women, such as feeding on their insecurities.

It took me about fifteen minutes to find the film's rhythm.  Once it showed the clips from the John Colt films, I knew what they were going for.  Although this film takes place in 2009, it pays homage to the 1970's. Espinoza dresses like John Colt, wearing bell bottoms and long side burns.  The soundtrack is 1970's inspired and when he dances he is clearly doing some mock disco moves.

The fight scenes are all gloriously over the top.  Espinoza does some anti-gravity moves that opponents stand still for, until his foot meets their face.  No matter how out matched, Espinoza seems capable of handling the situation with expert marksmanship and a kick to someone's head.

The last quarter of the film though, goes haywire.  I could not decide if the plot had gone over-the-top or if he was merely dreaming it all.  The final shot raised more questions than it answered.  I would have liked this film so much more if it could have decided on a clearer ending.

Marko Zaror is a martial arts expert.  His first big show business job was as The Rock's (Dwayne Johnson) stunt double in The Rundown (2003).  As a producer on this film, he clearly has a sense of humor as well as understands what he brings to the table.   This is best exemplified when Dominique asks him to surprise her and he does.  If only the ending could have been less surprising. 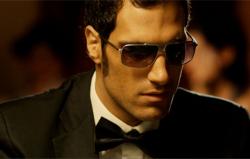 Marko Zaror is the best thing this movie has going for it. He's physically imposing with a chiseled face and charisma to spare (see photo). He acts as cool as he looks without being too cocky. He's a martial arts expert with a great sense of humor as evidenced by his stiff dance moves. He also manages to inject a bit of genuine emotion into a few scenes.

The characters are all variations of ones from any number of other movies but the cast is decent and the story unfolds in a fairly intriguing manner. The flashback of Antonio's parents getting killed is shown numerous times, and each time something slightly different occurs or is revealed.

The slo-mo fight scenes are staged with a flair for the dramatic. Mandrill fighting his way out of a casino hotel being the best action scene in the entire movie. He blows up the room as he goes through the windows, landing in a swimming pool several stories below.

Eric already mentioned two of the best sequences; the John Colt action star spoof and the scene where his uncle gives the adolescent Antonio advice on seducing women. Despite the fact that Mandrill lacks originality and has a WTF ending it manages to entertain in a mindless martial arts movie way. Marko Zaror possesses all the necessary qualities to become a huge international action hero.