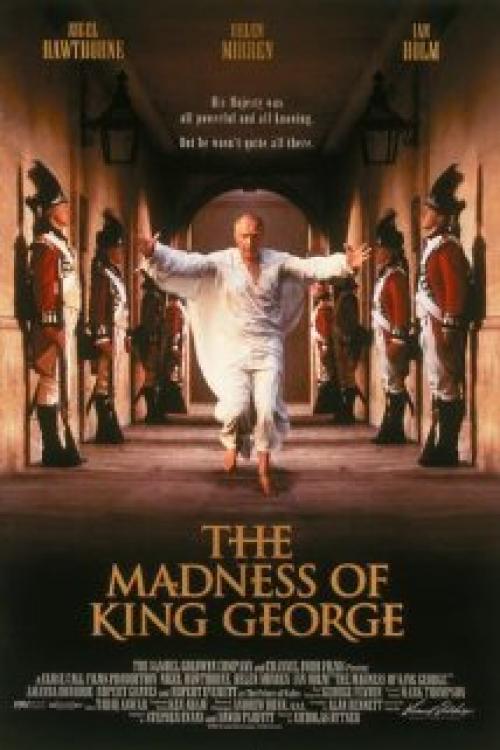 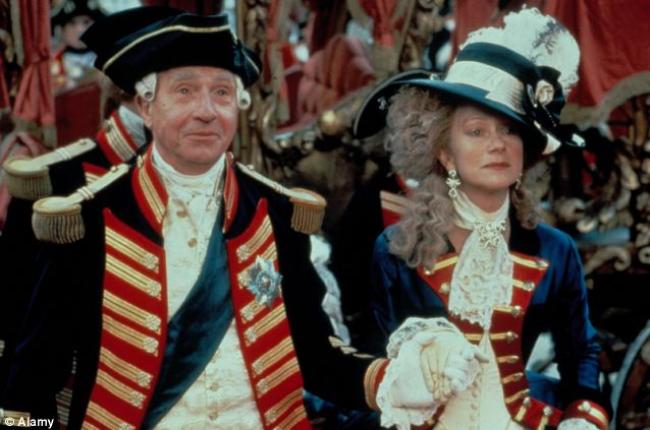 The Madness of King George is a dark comedy, adapted by Alan Bennett from his hit play The Madness of George III. The reason for the title change is that outside of England, George III is not universally known as a king, and also perhaps because they feared American audiences might mistake this movie for a sequel. This is the story of King George III's mental health issues and the archaic medical procedures he endured. It is set around the historical backdrop of the Regency Crisis of 1788 during which the King's son, George IV - also known as the Prince of Wales, plotted to have himself declared Regent in his father's stead.

Still reeling from the loss of the colonies during the American Revolution, King George III begins having bouts of mental distress. He becomes violent and prone to vulgar outbursts, “Push off, you fat turd.” He also experiences periods of forgetfulness. His doctors attempt various painful remedies including blistering and purges. One of them obsessively studies the king's stools and urine (which has a blue tint) for any signs or symptoms. “One may produce a copious, regular evacuation every day of the week and still be a stranger to reason.” As it turns out this guy was on to something, modern medicine now suggests that George III suffered from a metabolic imbalance caused by porphyria, that also happens to turn urine a shade of blue.

As the King's mental condition continues to deteriorate, his political enemies hatch plans to supplant him. A different doctor shows up with newfangled ideas using elements of psychoanalysis. The King is put in restraints and is made to follow a strict routine. In one great sequence the King is strapped down to a chair but it's shot as if it's his coronation ceremony. Handel's “Zartok the Priest” underscores the scene and the musical climax comes just as the king's head is placed in a leather strap, thus representing his crown.

The cast, led by the glorious Nigel Hawthorne, is universally terrific. Helen Mirren, once again playing royalty, is underused but still memorable as Queen Charlotte. Rupert Everett (in a fat suit) plays the indolent and gluttonous Prince of Wales. Ian Holm plays Doctor Willis, the physician with modern ideas who matches wills with the King. Rupert Graves has a few good scenes as one of the King's most trusted attendants and Jim Carter of Downton Abbey fame plays Charles James Fox, leader of the opposition. But it is Hawthorne who carries the entire movie. He is a delight from start to finish as the mentally unstable monarch. It's a juicy role and he relishes every outburst and over-the-top moment.

The Madness of King George is beautiful to look at. Shot at many famous historical locations around England, it vividly recreates its time period and won the Oscar for Best Art Direction. It was also nominated for Actor (Hawthorne), Supporting Actress (Mirren) and Adapted Screenplay. In 1999 it was ranked at #42 on the BFI's list of the 100 Best British Films of the 20th Century. 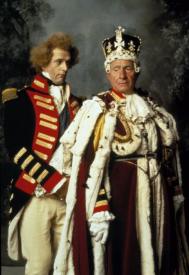 Rupert Everett and Nigel Hawthorne in The Madness of King George

The Madness of King George tells the sad tale of a man suffering from an illness that could not be accurately diagnosed or treated properly and efficiently at the time. As he is the leader of a country, many people are concerned for his wellbeing and his mental state. Some are personally invested, such as the Queen and Robert Fulke Greville, whose personal diary was the primary source for the play, The Madness of George III.

The King's suffering and how it affects those he loves is tragic as no one knows exactly what to do to help. Hawthorne breaks your heart as he shows just how frustrated the king was wrestling with emotions and thoughts he had so little control over. At one point he wakes up his servants, “Six hours of sleep is enough for a man, seven for a woman, and eight for a fool.” He then runs outside, pursued by the servants, still dressed in night wear, who are clueless of what is wrong or how to help. At another point he carries a child to the castle roof with the Queen in pursuit, fearing what his intentions are.

Had George been a mere British subject, he would have been dismissed as simply insane and likely locked away. When the doctor has him strapped in a chair, George bellows, “I am the King of England!” The doctor stands his ground, “No sir! You are the patient.” Although much is invested in his recovery, some are not so excited to see it through.

The King’s son, George IV, the Prince of Wales, is such a lazy and unlikable person that we wonder how much he truly wants to see his father recover. If George III dies or is considered incompetent, George IV could become King but that is an awful lot of work for such a sloth. Rupert Everett is hilariously horrible when the Queen, upset by having the King taken away from her, storms in and tells him that he should support the King as she has, doing such things as giving birth to his fifteen children. George IV, thinking he is being witty, smirks and responds, “Then you should be grateful for giving you breathing space…No, “breeding” space.” Everett then lets out the worst laugh I have heard in a long time.

There are some light moments such as when Greville gets seduced in the hall and when George and his servants play like children throughout the mansion. Of course, there are also the many running jokes, intentional or not, about the King's urine and excrement. This is however, a historical costumed drama and as such may not appeal to everyone. Some of the wigs alone are worth a smile, and how many of us can truly relate to people of such positions. If you like Merchant and Ivory films you are probably this film’s target audience.

The cast is very solid and the production value is impeccable. Patrick mentioned the many recognizable names in the cast and it certainly helps to be an anglophile to enjoy The Madness of King George. I also agree with my brother that it is Hawthorne’s performance that carries the entire movie. He plays the gamut of emotions and is never anything less than perfect. 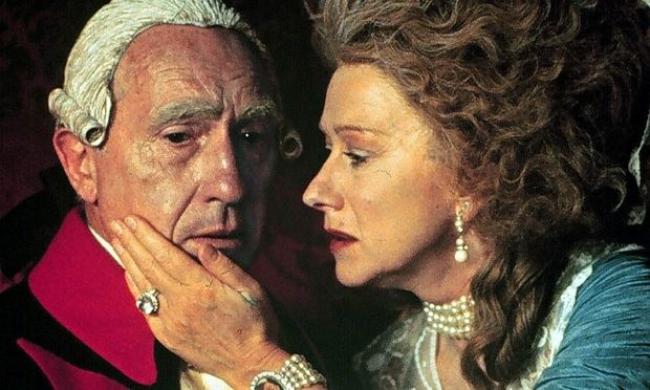 The name change and the reason for it Patrick referred to from The Madness of George III to The Madness of King George has become something of an urban myth and an inside Hollywood joke that supposedly pokes fun at the idea that audiences, and Americans in particular, would have mistaken the original title as meaning that this was the third film in the The Madness of George series. However, it's something the producers have denied and indeed the name was changed universally, including inside the United Kingdom where presumably they would know better. Their stated reason is closer to what Patrick said, which is that they wanted to make it plain to audiences that this was about a King and not just a plain old George from a family without much imagination when it came to naming their sons.

Shakespeare is referenced several times during the film, including a topic appropriate reading of King Lear in one scene. It brought to mind another Shakespeare quote, but from Hamlet, "Madness in great ones must not unwatch'd go." As Eric wrote, if George were just another George, he'd have been locked up somewhere or sent, if very lucky, to Dr. Willis's farm. As inhumane and archaic his treatment seems at times, compared to what any of his subjects would have been subjected to, it is the finest care then available. Although the film refers to porphyria as the cause of the King's madness, more modern theories tend to dismiss this idea. A 2013 study by St. George's University of London posited, after studying thousands of the King's personal letters, that the cause was indeed mental rather than the result of a disease, and concluded that were he diagnosed today, he would probably be deemed a manic-depressive. Their research also revealed that the King was given medicine derived from the plant gentian, one of the side effects of which is turning the patient's urine blue. Although the causes of his madness will probably continue to be debated by scholars.

As Patrick said, Hawthorne carries this movie and he carries it brilliantly. He brings such humanity to the part that you can not help but feel for his plight. You never lose sight of the man behind the madness as he often times struggles to maintain control over himself. He moves between arrogant monarch to cowed child, often in the same scene. He more than earned his Academy Award nomination. The rest of the cast (filled with a who's who of British character actors as my brothers wrote) all do good work, but this is in reality a one man show and Hawthorne is nothing short of perfection.

There are several running jokes, which are clearly intentional, but I would stop short of calling it a comedy. A tragedy with jokes is how I would describe it. Bennett wisely slips in a few laughs when the tone becomes too dark and depressing. He also ends the story on a positive note with the King seemingly recovered. The truth is that the king was plagued by such episodes for the rest of his life until eventually he was forced to hand over power to his son in 1810.

With its high production values, this is historical spectacle on a grand scale. There's definitely plenty for an Anglophile or lover of Masterpiece Theater to enjoy.