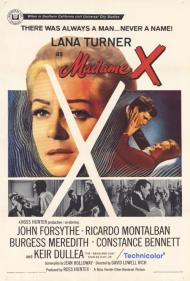 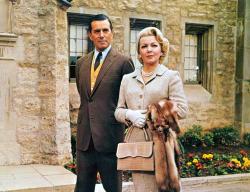 Turner is the newly married Holly Anderson. Wed to a wealthy and politically ambitious man (John Forsythe) and with a bouncing baby boy, she seems to be living out her dream. When her husband is called to Africa on an extended diplomatic trip, the neglected Holly begins spending time in the company of Phil Benton a notorious playboy (Ricardo Montalban).

When her husband unexpectedly returns, requesting that his wife and baby join him abroad, Holly immediately sneaks away to quietly end the budding relationship with Phil. He protests and in a fit of rage grabs her arm to stop her from leaving, he slips and falls down a flight of stairs to his death. It turns out that Holly's mother-in-law (Constance Bennett in her last film role) had had her daughter-in-law followed by a detective. She blackmails Holly into faking her death at sea and going away from her family forever. And so Madame X is born.

She spends time in Europe before winding up in Mexico. The years pass and she becomes an old drunk. When a man she has begun a relationship with discovers the mystery of her past, he immediately begins plans to extort money from the Andersons. In an effort to protect her long lost son and husband she commits murder to keep her secret intact.

Just when it seems the melodrama can't get any thicker, it turns out that Madame X's only child (now a young lawyer) will unknowingly defend his own mother in a sordid murder trial.

The acting is first rate throughout the movie but it is the harrowing performance of Lana Turner that keeps the unlikely storyline from unraveling. She travels from carefree young mother, to would-be adultress, to brokenhearted outcast, to drunken low-life, to - at last - triumphant martyr. Thanks to her - and to a lesser extent the talented supporting cast - Madame X is a compelling movie experience that rises a notch above your run-of-the-mill weeper.