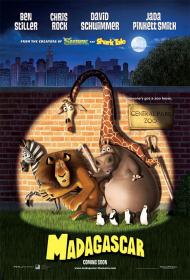 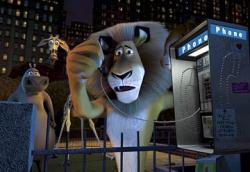 Madagascar is the latest computer animated entry from DreamWorks, the studio that enjoyed such success with the two Shrek movies. While it is as visually dazzling as those two movies, it isn't nearly as funny. It starts strong, but loses its momentum about half way in and never regains it. The famous cast and amusing humor keeps you from being bored, but fails to draw you in and ends up being fairly forgettable.

Stiller supplies the voice of Alex the lion who is the star attraction at the Central Park zoo. His best friend is Marty the zebra (Rock). As the movie opens, Marty is celebrating his tenth birthday, which happens to be half the life expectancy for a zebra. Fueled by his mid-life crisis and the conspiracy minded penguins, Marty decides to try to escape from the zoo and make it to the wild. Alex, who can't imagine why anyone would want to leave New York, heads off in pursuit accompanied by Melman (Schwimmer), the hypochondriac giraffe, and Gloria (Pinkett Smith) the hippo.

This opening third of the movie is the best part of the film. As the animals wander around Manhattan, taking a ride on the subway and ending up in Grand Central, the jokes come fast and furious. The subway and sights of New York are all recreated faithfully.

After the animals are recaptured, a group of animal rights activists, mistaken into thinking that all the animals are unhappy in captivity, manage to get them all shipped to the wild. En route by ship to a Kenyan animal preserve, the penguins stage a mutiny and hijack the ship. During the take over, Alex, Marty, Melman and Gloria's crates are thrown overboard where they end up on the shores of Madagascar.

There are still a few good jokes after their arrival in the wild. Alex does a funny spoof of the Statue of Liberty scene from Planet of the Apes. And when Marty and Alex start arguing over whose fault it is that they're all stranded here, Alex tries to divide the country between them, telling Marty that his side is the Jersey side of the island. However, the subplot with the Lemurs and the fossa is more cute than funny and much to much time is taken up with it.

The best jokes in the movie involve the different personalities of the animals. The penguins are all militaristic conspiracy nuts. The monkeys are intellectuals who in the beginning of the film are going to sneak off to hear Tom Wolfe speak at Lincoln Center. "Of course we're going to throw poo at him," one tells the other. If the entire movie had been set in the zoo, it would have made for a much better and funnier story.

Not a classic, but a lightweight entertaining cartoon with enough jokes for the adults as well as the kids to keep you from being bored, even if you've forgotten most of them shortly after watching it. 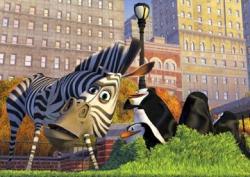 I forgot it as I was watching it. Screen writing 101: create likable characters with a goal in mind for the audience to cheer for. Madagascar has mildly likable characters, but what are their goals? The zebra wants to be free in the wild but no one else does. Do you root for the zebra knowing that makes everyone else unhappy or do you root for the lion knowing that would make the zebra miserable? The animals don't know what they really want so what is the audience to do or care for?

The movies best characters are the penguins. "Smile and wave boys. Smile and wave." They are in agreement to escape. They may be one dimensional characters but they are the most entertaining. I laughed hardest when they arrived at the south pole and said, "This sucks!"

Stiller and Rock have wonderfully distinct voices and are great in there roles. David Schwimmer's and Jada Pinkett Smith's parts could have been voiced by anyone. They do not have easily recognizable voices. I watched Friends all of the time yet never made the connection that Schwimmer was the voice of Melman.

Madagascar has a few good lines but never sets a real goal for itself, so the audience is left feeling nothing by the end of the movie. My nine year old was dancing to the end credits as we walked out of the theatre. I was just glad to be walking out. 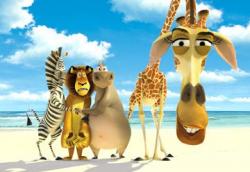 I thought Madagascar was pretty awful. Most of the humor aimed at adults falls flat. The beginning part in New York does have some charm but once the characters arrive in Madagascar the whole thing plays like a bad Saturday morning cartoon.

The Penguins do steal the movie. Every time they appeared onscreen I laughed. I also enjoyed Jada Pinkett's home-girl hippo Gloria, “Hmm, I know that's right!"

I know children today are more sophisticated and grow up faster than ever but Madagascar crosses the line of appropriate humor. Does any animated family movie really need drug induced hallucinations played for laughs and rectal thermometer jokes? I guess so, when you have such unmemorable characters and no plot. I say give the penguins their own movie. 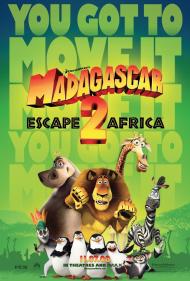 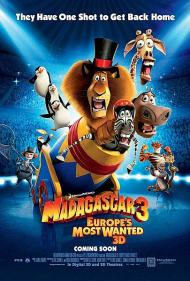 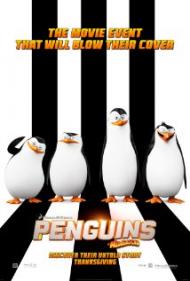