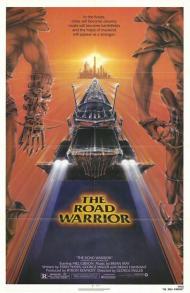 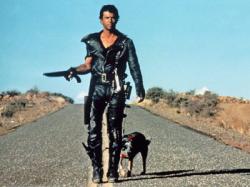 Mad Max 2 was made and released in Australia in 1981 but renamed The Road Warrior when released in the United States in 1982. It starred a rookie actor from Australia who some Americans may have recognized from Gallipoli (1981) and the, then, cult classic pre-quel Mad Max. This is the movie that raised Mel Gibson's star and brought him to Hollywood.

It opens with a brief synopsis of the first film as it explains that there was a war between two powers that caused the collapse of modern civilization. Remember, this was made during the Cold War. The narration then shows that Max's wife and child were killed, thus sending the depressed former cop driving into the wasteland.

As we first meet Max he is racing down a deserted road with some punk looking bikers after him. In this post apocalyptic world cars and fuel are the most valued commodity. Max comes across a stalled rig and after scaring off the bikers, takes what fuels is left dripping from the tank. He then travels on and comes across an oil refinery/fortress being attacked by the same biker gang that was originally after him.

The bikers, as well as Max, need the gasoline and both will do anything to get it. Max sneaks inside and strikes a deal with the barricaded folks who want to leave without being murdered by the gang. "Two days ago, I saw a vehicle that would haul that tanker. You want to get out of here? You talk to me." The deal is made but not everything goes as planned.

Mad Max 2 is action packed and paced like and Indy car race. But, like all good science fiction movies, this one contains symbolism. Everyone is battling for possession of the gas but it really is a battle between civilization and anarchy. The gang is shown torturing and killing people for the fun of it. They rape and murder at random. The people inside the fortress are organized and work together peacefully.

An interesting note is that in both Mad Max movies the bad guy's gangs are openly shown to include homosexuals as well as heterosexuals. In Mad Max, some gang members rape a guy. In this movie, one of the main bad guys has his boyfriend riding with him on his motorcycle. Considering that none of the "good" guys are shown to be gay, it appears that director/writer George Miller is trying to say that without law and order perversion flourishes? No Patrick, I am not calling homosexuals perverts. I believe Miller is saying that. 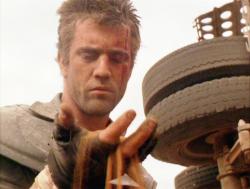 I'll bet if you took a copy of the script for this movie and stripped it down to just the spoken dialogue, it would probably only be a few pages long at most. Gibson himself can't have more than 20 lines throughout the whole movie. That's about as lean as you can get it. And given how much trouble Gibson has gotten himself into in the more recent past, perhaps having him keep his mouth shut is a good thing.

Eric talks about themes and homosexual subtext. I say screw that and just enjoy watching the action, of which this movie has plenty. All of the Mad Max films are good, but this one is definitely the best of the bunch.

The original Mad Max is good, but it was done on the cheap and the stupid decision to dub the voices to get rid of the Australian accents for American audiences didn't help it. And by Beyond Thunderdome, the series had jumped the shark and gone completely the other way, being a big Hollywood production with the added camp value of Tina Turner in a lead role. The Road Warrior though, as Goldilocks might say, was just right.

It's also stood the test of time pretty well and only seems dated by the costumes and hairstyles of those people inside the oil fortress. Max's outfit doesn't seem outdated and I guess S&M chains and leather ever comes into style because the villain's outfits were as bizarre then as they are now.

As Eric pointed out, this movie was made during the cold war, but with ever rising oil prices and seemingly unending wars in the Middle East, this movie seems more prophetic today then it did when it was made. I'm not necessarily a pessimist, and I believe that mankind will somehow muddle through into the future, but if things ever do go down, this future here seems a likely possibility, only maybe without so many assless chaps. 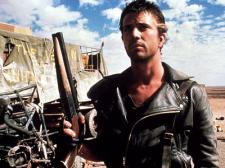 Mel Gibson at his hottest.

Let me start by saying that assless chaps are rarely a bad thing in my opinion. Eric, I’m not sure Miller is saying that "without law and order perversion flourishes", perhaps he is just imagining a world where women are a scarce commodity. As history, and any prison demonstrates, homosexual behavior flourishes in a society consisting mostly of men. For me the male couple were the most interesting people in the movie. I wanted to know more about them.

I have never been a big fan of this genre. Action for action’s sake bores me quickly. Especially when it is without character development or a healthy dose of humor. That probably explains why I have never seen this movie until now. It’s not bad really. The action holds up, the cinematography is splendid, and the costumes work. Gibson was at his most gorgeous.

Scott, you mentioned the lack of dialogue. You’re right. This is one of the very few talking pictures that would work as well silent. The few lines could be shown with subtitles, like a graphic novel. Although the sound effects do add quite a bit. 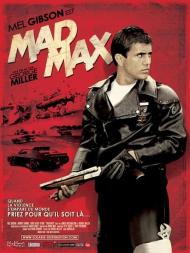 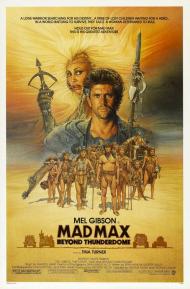 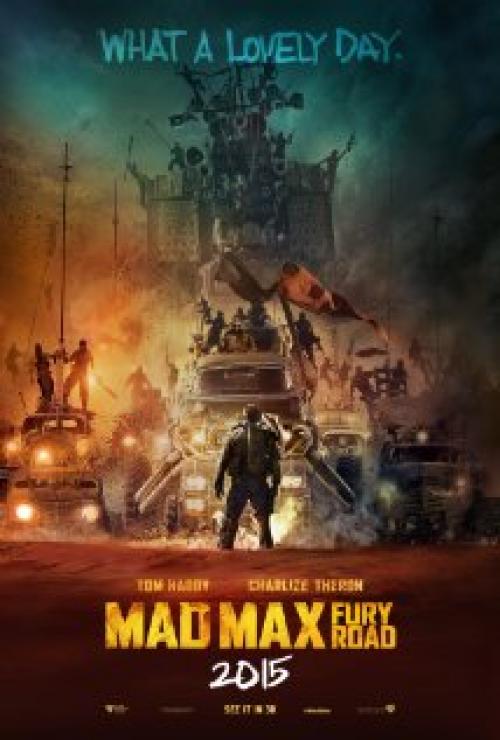