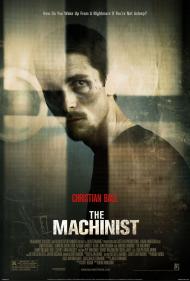 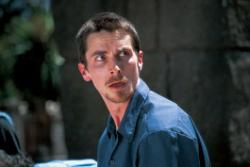 Christian Bale in The Machinist.

With The Machinist, Christian Bale adds his name to the list of actors who have undergone extreme physical transformations for a movie role. In his portrayal of Trevor Reznik, Bale lost over 60 lbs to transform himself into the skeletal insomniac who may or may not be suffering hallucinations in this nicely filmed, intriguing story which is one part Twilight Zone, one part X-Files, and one part human drama.

When the story begins, Reznik claims to have not slept in a year and after seeing his wasted, emaciated appearance; it isn't hard to believe him. His days are spent at his job as a machinist, and alternating nights are spent with a prostitute (Jennifer Jason Leigh) and a waitress at an airport diner whom he innocently flirts with over coffee and uneaten pie. After an accident in the factory where he works, when a co-worker loses an arm and Reznik is to blame, odd things begin to occur. Cryptic messages begin appearing on post-it notes stuck to his refrigerator and he begins seeing a man that might or might not be an insomnia-induced hallucination. Reznik's paranoia grows as the movie moves towards its climax, which turns out to be both satisfying and unexpected.

The movie is beautifully filmed with washed out colors that perfectly match and enhance the feeling of sleeplessness that permeates the story. You feel Reznik's exhaustion while watching. It's a great example of how artistry, which is too often used for its own sake, can enhance a movie.

While the entire cast does a great job, it is Bale who holds the movie together, through all of its twists and turns. His physical transformation is only a small part of his performance, adding to his portrayal of a man caught in the grip of utter exhaustion and paranoia. He pulls you in to the movie and holds you there, even in the moments when you're wondering if the story will ultimately come together and pay off the build up. Unlike so many movies with surprise endings, The Machinist's ending satisfies. It explains everything before it and is surprisingly grounded in reality.

Although it's not the sort of movie you'd want to watch over and over again, The Machinist is definitely worth a viewing, if for Bale's performance alone. If he can bring some of his haunted portrayal here to his upcoming role as Batman, then I can't wait to see it. 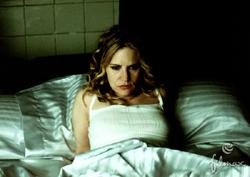 Jennifer Jason Leigh in The Machinist.

Bale does do a great job and Leigh has some very nice breasts, but the ending was not quite as satisfying as I had hoped. Everything comes together at the end but instead of thinking "wow" I thought "Oh, that makes sense." I prefer a bigger payoff than indifference from a movie so full of mystery.

Throughout the film I was trying to make heads or tails out of what was going on. It was quite annoying as I am a lazy movie watcher when it comes to thinking too much about the plot. The ending made sense of it all but it did not make it anymore entertaining. There is no one in this film to care about. Thus, Trevor's moment of redemption is moot. 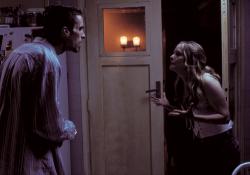 Christian Bale and Jennifer Jason Leigh in The Machinist.

Eric, sometimes I truly do not get you. How can you say there is no one in this film to care about? Trevor is basically a good person who made a tragic mistake, which he then compounded by running away from the consequences. Stevie may be a prostitute but she is certainly a compassionate woman that truly cares for Trevor. I found both of them to be worth caring about and rooting for.

Of course, as much as Trevor tries to subconsciously block out his memory, he can never run away from his conscience. He is such a pitiable creature but the denouement answers every question and explains just why this guy was spiraling into insomnia induced paranoia and insanity. I had figured out most of the ending before it was revealed but it was still quite satisfying to watch as reality finally catches up to Trevor and he begins his process of atonement.

Christian Bale set a new record for weight loss by an actor for a movie role, to play Trevor Reznick.  For four months prior to shooting his only reported sustenance was a cup of black coffee and either an apple or a can of tuna a day (less than 300 calories in total). His dedication is quite impressive and his gaunt appearance heightens his intense performance.

Jennifer Jason Leigh is also quite good as Stevie, the one person in Trevor's corner. They are two sad outcasts living in the shadows of society. She understands that Trevor is troubled but it isn't until their big confrontation over a photograph that she comes to fully appreciate the depth of his psychological problems.

The name Trevor Reznick kept reminding me of Trent Reznor of Nine Inch Nails. Sure enough The Machinist's screenplay was written by Scott Kosser, a self-proclaimed NIN fans. The original draft of the script had a quote from the band's lyrics on the front page. There are also many references to characters from the novels of Dostoevsky, particularly Crime and Punishment and The Idiot.

The director incorporated plenty of ominous symbolism. The time 1:30 plays an important part in the story. Every time Trevor looks at a clock that seems to be the time. And the big plot reveal comes at exactly one hour and thirty minutes into the film. Three times Trevor must choose between diverging paths, one going left the other right. The first time is during the Route 666 amusement ride, the second time is when he's running from the police and escapes into the sewers, and the third and final time is at the end when he is driving on the highway and must choose between the exit to the airport and the one to the police station. The first two times Trevor chooses the left path, which in ancient superstitions represents the unlucky or evil path. It is only at the end that Trevor chooses the right path to redemption.

Although it is set in Los Angeles, the entire production was filmed in Barcelona, Spain. Thanks to the talents of Brad Anderson, The Machinist maintains a consistent feeling of sinister paranoia throughout. It is a beautifully structured and exceptionally acted motion picture and one that I found to be a completely satisfying mystery.