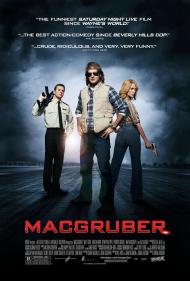 Wiig, Forte and Phillippe in MacGruber

I have never seen a Saturday Night Live skit with MacGruber. It made little difference as the movie is anything but deep. It introduces the character like a scene from Rambo. The one thing it does not explain is why the military thinks he is such a great asset.

Somehow, MacGruber is a former Green Beret, Navy SEAL and Army Ranger. He has been awarded a slew of medals, including 16 purple hearts. After his fiancée was killed at the alter by his nemesis Dieter Von Cunth, MacGruber moved to a monastery to live a life of peace. After learning that Cunth has stolen a nuclear warhead, Colonel Faith begs MacGruber to come out of retirement to save the nation. After his first team fails to get very far, MacGruber teams up with a reluctant Lt. Dixon Piper and Vicki St. Elmo, who not so discreetly pines for MacGruber.

If inept has a name, it must be MacGruber. He refuses to use a gun, preferring to rip peoples throats out instead. He distracts armed men by putting a celery stick up his ass. His inventions rarely work and he belittles himself whenever he is desperate, “I will suck your dick. You can fuck my ass.” He pleads more than once, begging to be put back on the case.

Forte takes MacGruber seriously. It allows the audience to laugh at him and his ridiculousness. Whether he is haplessly shooting at the enemy (he eventually uses a gun) or wheezing his way through sex, you cannot help but laugh at this guy. He puts Vicki in harms way and uses Dixon as a human shield. The guy is pathetic.

This is the movies biggest weakness. I know the argument is to give comedies a break because they are simply played for laughs, but it does not make sense that Macgruber was so successful in the military, yet so stupid in this movie. They could have said he failed at all of those branches of service yet, for some reason, was the only man who could defeat Cunth. That would have worked better to rattle the stiff Lt. Piper, and better explained his lack of experience with guns.

Macgruber earns it’s “R” rating, and most of it’s laughs, with gore, language and Forte’s naked ass. He bares it several times. Is it just me, or are more actors than actresses dropping their pants these days? What happened to gratuitous female nudity? 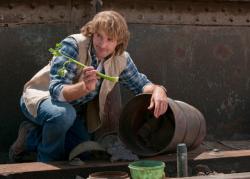 You want me to put this where? No problem.

Eric, by watching one scene in this movie, you have now seen every MacGruber skit ever made.  The bit at the end when MacGruber, Vicki and Dixon are defusing the missile and they're both tossing MacGruber innocuous items and saying things like, "You got it MacGruber" while he gets sidetracked by mundane matters, is what happens in every single MacGruber skit.  The only difference is that every skit ends with the bomb being detonated before he can defuse it, with no explanation as to how he's still alive in the next one.

The best I can say about this movie is that it wasn't as bad as I thought it was going to be.  There are parts that I laughed out loud at, but it definitely has its flaws.

Like a lot of bad Saturday Night Live sketches it's repetitive and some scenes go on for too long.  When MacGruber and Vicki make love and you go from the musical, movie version of sex, to the reality of that sex, is funny.  But when you then repeat the exact same joke just 2 minutes later with MacGruber and his dead wife, it loses its impact.  Likewise, the offer to "suck your dick" is used at least 3 times.  The "pound that Cunth" line is pounded to death.

I agree with you Eric that MacGruber's past doesn't gel with his abilities.  If you look at a character like Austin Powers, the joke is that somehow he actually is a good secret agent, despite his looks and crass behavior. MacGruber though, is horrible at his job.  He's so horrible and stupid that there's absolutely no reason why they would bring him out of retirement.  They could have at least tried to say something like his skills have become rusty over the years, but instead they imply that he's always been like this.  Or they could have made him, not the leader of the group he assembles at the beginning of the movie, but just the explosives guy and then when everyone else is blown up, he could have been the only one left and so the mission falls to him by default.

Although there are some genuinely funny moments, too many of them are simply shock laughs.  Forte will stoop as low as he needs to for a laugh.  "Stick a piece of celery up my ass?  No problem!"

This is definitely Forte's movie.  Kristen Wiig has a couple of funny moments, but Ryan Phillipe and Val Kilmer both show just how far their careers have fallen in generic parts that could have been played by anyone.

The thing about movies that rely on shock value for their laughs is that they don't really stand up to repeat viewing.  Even though I laughed more than I thought I would at this, I can't ever imagine wanting to watch it again. 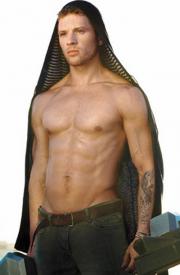 I don't think this shot was in the movie, but who cares, Ryan Phillippe is hot!!

You are both far too kind to this piece of cinematic garbage. While watching it I kept thinking, “Who the hell green-lit this pile of crap?” I can only hope they no longer have their job. Here’s the recipe as I see it. Take a generic plot, add inane antics by a completely unfunny lead character, mix in and repeat plenty of infantile dick and cunt jokes that were too offensive for television, throw in a pinch of a bloated Val Kilmer and stir.

Apparently some people find it humorous in a movie when a presumably straight male says to another presumably straight male, “I’ll suck your dick. You can fuck me in the ass.” I can only assume so since this joke gets trotted out every fifteen minutes or so. As Scott mentioned the hilariously clever (not at all) use of Cunth for cunt gets beat to death as well.

Picture this scene: MacGruber is assembling his team. He approaches a man wearing a helmet that we see only from behind. The man removes the helmet and slowly turns around revealing his black face with a dumb expression on it. Cut to a disgusted look on MacGruber’s face followed by him crossing the guy’s name off of a list. This scene is, of course, not in the movie because modern audiences no longer find such blatantly racist jokes funny or acceptable. Instead we have a variation of this same joke with a gay character. Yes boys and girls, it is still perfectly alright to make homophobic jokes that belittle gay people.

The only good things I can think of about this horribly unfunny movie are the presence of Kristen Wiig, who always manages to make me chuckle, and the fact that Ryan Phillippe still looks damn good (and he wears that celery stick in his ass much better than Will Forte).