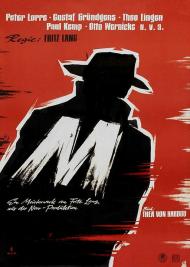 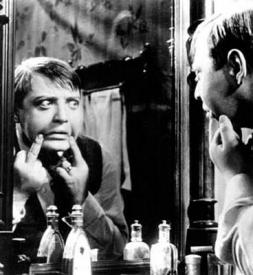 M was German filmmaker Fritz Lang’s first talking picture. He cowrote the screenplay with his wife Thea von Harbou. They would soon dissolve their marriage as well as their successful moviemaking partnership as his wife embraced the Nazi Party when it came to power in 1932 and Lang (being half Jewish) would immigrate to France and later the United States. This is also the movie that turned the then unknown Peter Lorre into a star, although this didn’t happen in America until 1933 when the movie was finally released in the states.

Lang was a master of using shadows and stark lighting. His style was definitely a forerunner of Film Noir. He also excelled at fluid camera movement. With M he demonstrated a mastery of sound as well. From a technical standpoint Lang was a brilliant filmmaker.

The movie opens with a group of children playing and singing a song about the evil man in black who will come and get you. Peter Lorre plays Hans Beckert, a serial killer in Berlin who preys on little girls. He is a classic example of a child molester. He whistles a tune (“In the Hall of the Mountain King”) as he walks the streets searching for victims. He then befriends the child by buying them candy and balloons. None of the murders are actually shown and we know who the killer is from the beginning but M still manages to be creepy and suspenseful.

The Berlin police begin harassing the city’s underworld in an attempt to find the killer and appease the populaces growing hysteria and paranoia. The criminals of Berlin take it upon themselves to catch the elusive fiend to get the police off their backs. Eventually, with the help of the town beggars, the cons discover his identity. One man puts a chalk M on his hand and then slaps Lorre on the back, thus marking him as the murderer for future identification. At the movies’ climax Beckert pitifully exclaims, “I can’t help what I do! I can’t help it!” Lang takes a sympathetic view towards this monster, portraying him as a victim of his own insanity.

M has moments of brilliance and a mesmerizing performance from Peter Lorre. There are perhaps a few too many scenes of the cops searching for the killer and then the Berlin underworld joining the manhunt. Whenever Lorre is on the screen the movie is riveting. M is groundbreaking in content and style, and in Hans Beckert, Peter Lorre created one of the all-time great movie villains. 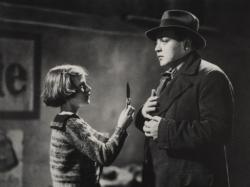 Yes Patrick, whenever Peter Lorre is on the screen, the movie is riveting. The problem is that he is rarely on screen. We hardly see him and he barely has any lines until a scene near the end when the people of the underworld put him on trial. Here he finally gets to do something, begging for his life and pleading insanity.

One third of the film is simply about the citizens fearing the unknown child killer and how the police are searching for him. Another third is about the gangsters dealing with the pressure the police are putting on them. The final third is, finally, the capture and “trial” of Hans Beckert. It is the best part of the film with Lorre proving to be a great actor. As Patrick noted Beckert claims he cannot help himself and he even attempts the, “let he who is without sin cast the first stone” argument.

Fritz Lang wrote this to be a story that may cause conversation. He never excuses Beckert exactly but he does make a point that children need to be protected by adults. The last scene even emphasizes this with an extra breaking the fourth wall. She looks at the camera and says sadly, “This won't bring back our children. One needs to... keep closer watch... over our children. ALL OF YOU!”

M is not that entertaining of a film as so little happens. The story mentions he has killed many children but we only see him commit the crime once and attempt once to do it later. There have been several edited versions released and the shorter one is likely the best. The redundancy of citizens, officials and criminals complaining to each other about the killer becomes boringly repetitive.

What makes this film so unique is the subject matter. Beckert kills children and there is a suggestion of sexual molestation as well. Name another old film that covers such a dark subject. Something else that struck me about this movie is the nursery rhyme Patrick mentioned. “Just you wait, it won't be long. The man in black will soon be here. With his cleaver's blade so true. He'll make mincemeat out of YOU!" and I bet you thought Freddie Krueger was the first serial killer to so earn his own song.