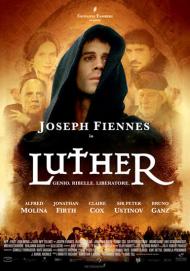 Directed by: Eric Till 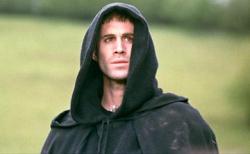 Being only familiar with the basics of Martin Luther's life, I cannot testify to the historical accuracy of this movie. I can only judge it on its entertainment value. And while the story of the Priest who nailed his protests onto a church door during the Renaissance, thus challenging the supremacy of the Roman Catholic Church, and beginning the Reformation that helped usher into existence more modern ideas of freedom, government, and most importantly, religion, would seem like a great and gripping story, this movie fails to completely capitalize on its potential.

It begins promisingly enough. It opens with Martin Luther's (Joseph Fiennes) sudden conversion to religion when he fulfils a vow to join a monastery that he made to St. Anne while standing in a field surrounded by striking lightening bolts. Formerly a student of law, he finds it difficult to accept the scriptures and the words of his 'superiors' without question. A task made even more difficult by the corruptness of the Catholic Church during this period of history. The selling of Indulgences (paying the church so much gold for a guarantee of less time to be spent in purgatory for you or a loved one) was particularly repugnant to him. His disgust eventually leads him to post a list of complaints against the Church onto the door of his local church. This angers the upper hierarchy of the Church and makes Luther a hero of the German people, who are tired of paying taxes to a foreign power.

This first half of the movie is entertaining and interesting. Luther is shown as a troubled, and doubting man, who is sincerely trying to find a faith he can understand and share with others. The political machinations of the Pope and his cardinals, along with those of the German princes, are intriguing. Yet, after this halfway point, the movie begins to lose its way a little.

Perhaps it's because the historical events and repercussions of Luther's actions from the first half of the movie are so wide and varied that it would be impossible for their full consequences to be shown in one movie, that the movie begins to meander and wander without focus throughout its last half. It also becomes increasingly difficult to believe Luther would be unaware of the effects his teachings would have upon the people and the violence that would be the result of their taking action, as he is portrayed in this movie.

The manner of speaking in the movie also wears on you as the movie progresses. I'm sure that Luther, an orator, was given to making long-winded speeches filled with flowery prose, but after an hour and a half, I was longing to hear someone speak just simple English. Let me give you an example of the dialogue so that you may appreciate what I mean (and keep in mind, I'm paraphrasing from memory). “Sirs, if we were to recant than the comet of our faith would shatter into a million fragments against a blackened sky." If Luther's purpose was to bring religion to the masses by translating scripture into everyday language, than couldn't he have spoken that way as well?

While my interest waned in the plot by its end, the movie is consistently beautiful to look at throughout its length. The castles, churches, and monasteries are all gorgeously done with great detail, as are the costumes. Unfortunately, sets, costumes, and cinematography do not add up to a great movie.

A little tighter, and a little more focused on just the beginnings of Luther's remarkable life, and I would have enjoyed this movie more. As it stands, it is an interesting, if not outright entertaining, look at a cinematically neglected historical figure.

Scott wrote that he could not testify to the historical accuracy of this movie and neither can I as it is not a part of history that so fascinates me enough to study at length. However, upon watching this movie I did some investigation. Let us begin with the fact that this film was financed by two large American Lutheran organizations, making it all too clear that they intend for Protestants to come out of this looking good and Catholics not so much.

The early part of the film finds Luther witnessing priests procuring whores, priests selling documents that "guarantee" the buyer less time in purgatory, called indulgences, peddlers selling trinkets representing saints and supposed holy artifacts bartered like sports trading cards. He sees the hypocrisy in the splendor and wealth of the Catholic Church in comparison to the very poor in his congregation and sets about making a big deal about it.

Luther however, quickly became a hypocrite. He objected to the Catholic Church preaching doctrine that does not appear in the Bible. He translated the Bible to German, leaving out many books from the Bible of his choice. The Catholic Church may have added their own rules for their followers but to edit the Bible contradicts Luther’s complaint that the Papacy never let the poor read the Bible themselves. To censor the Bible is akin to Nazi book burning. As far as the objection to the Catholic Church being wealthy, look no further than the two Lutheran organizations that financed this movie. Both are Fortune 500 companies.

After posting his opinions on the church door and challenging the papacy, Luther became a pop star, mobbed by folks where ever he went. They wanted to kiss the hem of his robe and call him a saint. Crowds chanted his name. He is not depicted as liking the attention but who is this movie kidding? Everyone likes to be appreciated and acknowledged for their efforts. He may very well have not been after fame but Fiennes portrays him as far too humble to be believed. The bashful people of the world are not the ones who change it.

At one point, a priest tells Luther, “You are tearing the world apart.” Luther responds “That day when you sent me out to change the world, did you really think there wouldn’t be a cost?” At that moment in the film, Luther was referring to the cost it was having on him. However, Luther’s revolt resulted in Church burnings, mass killings and the opportunistic wealthy making moves on land owned by the church. Someone in the film tells Luther he believes one hundred thousand people were killed.

I will not defend the Catholic Church or the Protestants. The Catholics preached what they wanted their followers to hear just as this film tells us what the Lutherans who financed it want us to see. Religion does not come from any one person be it someone who sits on a throne or he who leads a rebellion against that person. Religion is extremely personal and unless that religion impedes on another’s freedom in any way, no one has the right to tell another how to worship or what to believe.

This satisfying enough film may have been told with an agenda in mind but it none-the-less sparked my interest in the man and I feel an afternoon spent watching this film and reading up on Martin Luther to have been a very educational one.