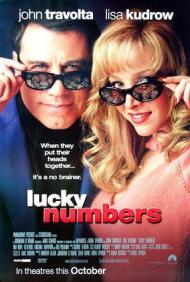 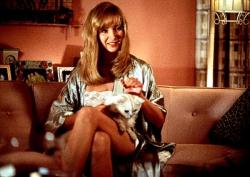 It's not that Lucky Numbers is that bad of a movie, it is actually fairly entertaining. I was, however, expecting a little more; the combination of John Travolta and Lisa Kudrow along with Nora Ephron's directing sounded like a sure-fire combination. Unfortunately, as is too often the case, the fault lies in the script. It lacks any real wit and most of the twists are very predictable. If the pace were a little more energetic this could possibly have been overcome, as it is we are left with just the rough draft of a good movie with very likable and talented stars giving their all.

John Travolta is Russ Richards a well-known small town weatherman with financial difficulties stemming from bad investments. For example he put all his money in a snowmobile dealership when there is no snow in the forecast. Anyway, to make this as brief as possible, he, along with Lottery girl Kudrow, decide to fix the lottery ball drawing to win 6.4 million dollars. They must pick someone honest to buy the ticket and turn it in for them; this leads to one of the funniest scenes in the entire movie. Michael Moore of Roger and Me fame plays Lisa's asthmatic, masturbating cousin who gets greedy and tries to get more than his originally planned twenty grand. The rest of the talented cast includes Tim Roth, Ed O'Neil, Michael Rappaport and Bill Pullman.

The match up of Travolta and Kudrow is inspired and they both try very hard to be likable, still this ends up being another example of a movie with no sympathetic characters. The supporting roles are either too tame or too clichéd to evoke any real mirth and as a drama this movie lacks any real believability. So go see this movie only if you are a huge fan of its stars; just don't expect too much. 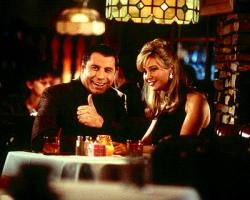 Actually, I'd say this movie is pretty bad, but I would agree that with this cast and this central premise, it could have been something much better. As Patrick pointed out, the pacing isn't fast enough. It drags on for far too long.

The real problem is the tone, which is very uneven. It works best as a lighthearted comedy. Including violence and murder in a comedy takes a delicate touch that Ephron just didn't have. She was always a better writer than she was a director. The story needed her witty dialogue more than it did her direction.

Of the talented cast it is Lisa Kudrow who steals the show. Travolta is the star, but she gets the biggest laughs. Her ruthless, willing to do anything for the money, attitude is quite funny at times, but when she commits murder, by letting her cousin die from an asthma attack, it makes it hard to sympathize with her, even if her cousin is played by Michael Moore.

Travolta's character is funniest when he is at his stupidest, such as when they're coming up with ideas on how to pull off the lottery swindle. In many ways he's a prototype for Will Ferrell's Ron Burgundy, being a dimwitted, local, celebrity newsman.

The story works best as a black comedy when it's taken to the extreme. It loses its way anytime it comes close to reality or drama. If these are real people then they are murderers and crooks and it's difficult to root for them. When playing a parody then it's possible to laugh at them.

With a surer comedic hand at the helm and a lighter, faster hand in the editing room, this might have been a good movie. As it is, there are moments of good stuff, but they're outnumbered by the slower, weightier ones.