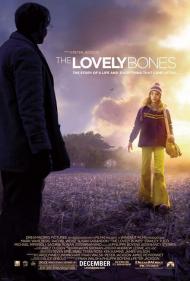 I never read the best-selling novel this movie is based upon, but according to every review I've read this isn't a very good adaptation of it. Which is a good thing, because if the book was anything like this movie it would be pretty lousy and I'd hate to think that such a horrible book would sell so well.

Having a dead person narrate a film has been done before (Sunset Blvd is a good example), but never as extensively as here. Saoirse Ronan plays 14 year old Susie Salmon. Susie is a normal American teenager living in 1970s Pennsylvania. Her life is cut short when she is attacked and murdered by the serial killer living their neighborhood played by Stanley Tucci. She then spends the rest of the film in a new age CGI Heaven where she watches her family cope (or not cope as the case may be) and learns about her killer's past and even meets some of his previous victims.

As you would expect from a plot like that this is a fairly depressing film. I mean when you've got a young girl going on about how her life was cut short before she ever got her first kiss and her family is almost torn asunder with grief, it doesn't exactly cause joy. And even the ending, which is played as if it's supposed to be uplifting, is still pretty damn depressing.

The film is directed by Peter Jackson of The Lord of the Rings and co-written by him as well and frankly he doesn't seem up to the task. It would have taken a more sensitive hand than his to truly bring this story to life with the delicacy it required.

You certainly can't fault the cast. Ronan is particularly good as Susie. Tucci is appropriately creepy as the killer; although an Oscar nomination seems a bit much. And even Mark Wahlberg shows some real emotion as the grieving father. Susan Sarandon has a small, but scene-stealing part as the Grandmother who provides just about the only comedy relief.

To be fair, this isn't a completely horrible movie. It does manage to generate some emotion, but as a whole it just doesn't gel very well. There's lot of imagery in Susie's heaven, but very little of it signifies anything and the things that do signify are so blatantly obvious that they're not symbolism, they just are. Also by showing the victim of a murder living in heaven after her death rather takes away from the impact of her murder. Instead of being deprived of life she's simply been moved to a different one.

While I'm sure the book is better, I can't (thanks to watching the movie version) say I'm likely to run out and buy it any time soon to find out. 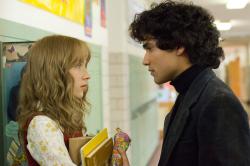 I haven’t read the book either but I enjoyed the movie more than you did Scott. I didn’t find it depressing so much as sad and bittersweet. I do agree that it would have been better without the sun-dappled CGI fields meant to represent some sort of limbo (it wasn’t actually Heaven Scott, just a way station in-between). They should have just used Susie’s voice-over narration from the Great Beyond without actually showing her.

The scenes set in reality are touching, well-acted and very evocative of suburban America circa 1973.

The scene where Susie is killed is incredibly frightening because of its simplicity and verisimilitude. How many serial killers have used a similar ploy to lure unsuspecting children to their graves? And Jackson shot the scene brilliantly. The December cornfield in the gloaming, with candlelight flickering from beneath the ground, makes a startlingly beautiful, almost fairy-tale, image.

I agree that Stanley Tucci is creepy; hell he is evil incarnate and his comeuppance is cheer inducing.

The innocence of the blossoming romance between Susie and her first boyfriend is heartbreakingly rendered as is the bond between Susie and her father. The scene where her sister breaks in to the killer’s house creates genuine tension. There are definitely many good things about The Lovely Bones but over all it is rather hit or miss. 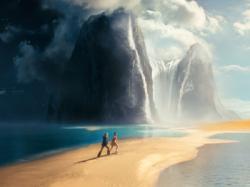 Yeah, but does it advance the plot?

What an overindulgent piece of crap!   Peter Jackson chose to forgo any sensible story telling in order to show off his special effects.  This entire film could have been cut in half and absolutely nothing plot wise would have been lost what-so-ever.  Sure, some of the shots in purgatory are creative and I can just picture Jackson and the CGI team fawning over each frame.  However, beautiful shots in and of themselves do not tell a story.

A girl dies and her spirit goes to another dimension between earth and the after life.  Her family grieves and nearly falls apart.  The end.  Everything else is padding.  This 14 year old girl moons over a boy.  They talk once and plan on meeting at the mall.  Are we really supposed to take the love story seriously?  Sarandon shows up with some humor, but all we really want to know is when and how the killer gets his.

I agree with Patrick that we could have done without all of the CGI scenes.  They look good, but so what?  They really do nothing but slow down the story.   I disagree with Patrick on one point though.  The killer's comeuppance is not cheer inducing.   Wahlberg should have dropped kicked Tucci's ass into that sink hole.  Taken was a sleeper hit for a reason people.  Audiences want to see the bad guy get it at the hands of the victim, not by some random accident.   What a namby-pamby ending!