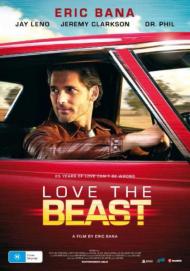 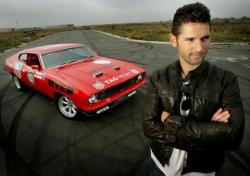 Eric Bana and his first love, the Beast.

Noted British car enthusiast Jeremy Clarkson says early on in Love the Beast that some people look at a car and just  see metal and wires.  Car people, he explains, see a living entity.   Eric Bana is most definitely a car person and he explains through narration, "It's hard for me to describe my obsession with motor racing, or what it actually feels like to drive a race car on the limit. There's a focus and an intensity that I don't find anywhere else. You're always on the edge, and you never hold anything back."

Love the Beast documents a love story between Eric Bana and the car he has owned since the age of 15.  He notes that a key moment in his life was when he first saw the movie Mad Max. He fell in love with the cinema as well as Mad Max's  Ford Falcon XB Coupe.  When he was 15, he talked his dad into buying him a beat up 1974 XB Coupe.  He and his friends spent the rest of their teen years working on his car and naming it the Beast.

After reaching worldwide fame and making millions of dollars, Bana still has that car.  After a major rebuild, he decides to gather his old friends and race it in the Targa Tasmania.  It is a five day race around the island.  This documentary features his efforts in the race.  Along the way he talks with fellow car aficionado Jay Leno and Dr Phil.  More intimately we meet his parents, friends and wife.

There are a couple of real telling moments in the film.  When Eric damages the Beast, he practically cries talking about how upset he is over it being wrecked.   The other one is when he has to go walk the red carpet for a premiere of his film Lucky You.  He seems genuinely nervous.  As he gets his suit on he drinks some beer and says, "Little bit of bravery gravy.  Always makes the red carpet a little bit shorter."  Racing at extremely high speeds excite him, while facing the press and fans makes him uncomfortable.

In Love the Beast, Eric Bana invites us to share in his passion for his first car.  Although I view cars as merely a form of transportation, I was drawn in by his enthusiasm for the subject matter.   It is rare for a movie star to so eagerly allow the public to see them in such an unguarded way.   You do not have to be a car person to enjoy Love the Beast, but it would not hurt if you are.