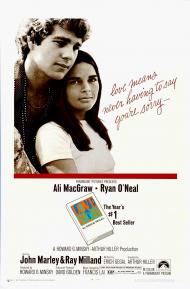 I don't really believe in the term, "Guilty Pleasure". I've always thought that if you enjoy a movie, or a song, or a book, then why feel guilty about it? Love Story though, is probably the closest I'll ever come to feeling a little bit embarrassed by how much I enjoy something. It's quite sappy and very, very dated, but I still enjoy it anyway. I even get misty-eyed every time at the film's conclusion.

The plot is very simple and the key is in the title. It's the unabashedly romantic story of two young Ivy League students who meet in college, fall in love, get married and then face tragedy as the girl dies. That's not really a spoiler, since the movie opens with the famous line, “What can you say about a twenty-five-year-old girl who died? That she was beautiful and brilliant? That she loved Mozart and Bach? The Beatles? And me?” Her death is baked into the plot from the very beginning.

Ryan O'Neal and Ali MacGraw star as the young lovers, despite both of them being older than their characters. MacGraw was 31, while O'Neal was in his late 20s, although both of them are able to play younger. They are both quite good in their parts and most importantly, they make you believe that these two young people are madly in love with each other, without which the film would just fall apart.

Many aspects of the film are dated, but it's not the fashion or the hairstyles that make it seem so these days. It's the falling in love montage set to that famous theme tune and highlighted by the two of them making snow angels that comes across as the most 1970s. That and the touchy-feely, do it yourself wedding.

The movie was made on the cheap, with a fairly small budget. In fact, the production ran out of money and the scenes of O'Neal wandering the streets of New York City following Jenny's death, were shot illegally, with just O'Neal and a small crew because they couldn't afford the permits.

To help garner publicity, screenwriter Erich Segal was asked by Paramount to turn his script into a book. It quickly became a bestseller. The film itself would go on to become the highest grossing film of the year and adjusting for inflation, is still one of the most profitable of all time.

Two aspects of Love Story almost became more famous than the film itself and those are its theme tune and one line of dialogue. The tune, a simple piano melody, is instantly recognizable and was eventually given lyrics, turning into a hit for Andy Williams. The line of dialogue is, of course, “Love means never having to say you're sorry.” It's a line that will either make you groan or think of this movie fondly. The AFI voted it number 13 on their 100 Years...100 Movie Quotes list.

It's easy to watch this movie with a cynical eye or a cold heart. Its simplistic tale of doomed, first love, is easy to poke fun of, but it's one that I fall for every time.

I agree Scott. Emotionally this movie works because it so beautifully illustrates the experience of first love and then it pulls the rug out from under the audience with the tragic ending. I find it amusing that although it suggests that Jenny has Leukemia, it is never specified and she seems to look quite healthy and beautiful right up until her final, deathbed moment. O'Neal and MacGraw have great chemistry together and you believe every moment of their romance. Yes it's cheesy but then falling in love is cheesy.

Other than the central love story, this movie also deals with the relationships between fathers and their grownup children. Oliver is carrying around baggage from his childhood and the fact that his father seems to want to purchase for his son an easy way through life. Jenny's dad is down to earth and makes a game attempt to keep up with the changing times. The scene where the young couple describe their wedding plans to him is quite touching. Phil (as Jenny calls her father) tries to be a good sport although it is clearly breaking his heart that his only daughter won't be getting married in a Catholic church. Both Ray Milland (in his first movie appearance without his toupee) and John Marley (Oscar nominated for this role) are very good as Oliver's and Jenny's fathers, respectively.

Love Story also balances humor with drama quite nicely. It was a dramedy before the term was coined. I like the scene where Oliver takes Jenny to meet his parents (see photo) and she is stunned to see just how rich her boyfriend actually is. The scene that follows is well directed. We see Oliver and Jenny almost immediately back in their car discussing the visit on their way home, interspersed with scenes showing their interaction with Oliver's parents. Oliver spends the ride pointing out his parent's snobbishness while Jenny makes excuses for their behavior.

This movie always reminds me of my parents. They saw it together back in 1970 and were deeply affected by it. I remember my mother commenting that there wasn't a dry eye in the theater. What I find interesting is that my parents always seemed much older to me than O'Neal and MacGraw do in this movie, but in real life they are both younger. I guess that is because, as Scott pointed out, both actors were playing younger than their actual ages.

It's interesting to compare the careers of Ryan O'Neal and Tommy Lee Jones. O'Neal was a huge star during the 1970s but was pretty much washed up as a leading man by the time he was in his mid-40s. Jones, on the other hand, didn't make it big until the 1980s when he was well into his 30s. He continues to have a hugely successful career today while O'Neal long ago became a washed-up has been.

Love Story sits right at the crossroads between classic and modern film at least as far as Hollywood is concerned. In many ways -the theme song for one example- it is a throwback to the romances of an earlier era, but as far as the language is concerned it was quite modern. Many famous people, including Richard Nixon, John Wayne and Nancy Reagan, all enjoyed the movie but voiced complaints about how much Jenny swears in it, which is quite amusing when you consider what was soon to come. The Exorcist was just around the corner after all. 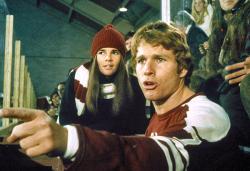 One of the most common complaints the threemoviebuffs have written about for romantic movies is that most films simply state that two people are in love without ever saying why. Here we see Jenny and Oliver meet and neither holds any punches with each other. She instantly recognizes that he is a preppy and it becomes her pet name for him. He, in return, enjoys her honesty and gives as much as he takes but tells her he wants more than just verbal sparring. That conversation leads to their first moment of sexual intimacy. They are open books to each other.  Although the, “Love means…” line is the most famous, I find the best one to be when Oliver says to Jenny, “How can you see me and still love me?” and Jenny responds with a smile, “That’s what it’s about preppy.” Is there a better description of true love than loving someone inspite of, or because of, their flaws?

Oliver is attracted to Jenny’s foul mouthed honesty but her attempts to soften his approach to his father, is sometimes cause for friction. I found Oliver’s relationship to his father somewhat interesting yet manufactured. At one point, Jenny asks Oliver what he calls his father. Oliver responds, “A son-of-a-bitch.” As Patrick noted, Oliver’s father seems to want to pave an easy as possible path for his son. Oliver resents it as it comes with the price of great expectations, “I hate that he expects no less.”

After having dinner with his parents, where his father offers to help him get into law school with his connections, Oliver tells Jenny on the drive home, “Jenny I don’t need that kind of help.” I found Oliver to be somewhat of a hypocrite at this point. Everything he has, including that British MG sports car he is driving, is because of his father. Oliver likewise realizes the hypocrisy and so decides to go it without his father’s help and money, but he does keep the hot car.

Oliver and Jenny marry and begin their adult lives of jobs, responsibilities and talk of having children. All of their dreams seem to be coming true. Then, the harsh news of Jenny’s health is revealed and the movie becomes a bit macabre as we know the end is coming. We start to look at her as Oliver does, like a bomb with a broken timer, not knowing when it will happen. This is your cue to grab the box of tissues.

Although this is a movie about a couple, it truly is Oliver’s story and how his world was changed by this woman who came into his life like a gust of wind that blew away his confusion. Even on her death bed, she talks to him with brutal honesty, saying what he dares not. It was her love and blunt manners that captured his heart and made him the man that he became. It was her ailing health that forced him to ask for his father’s help. Only for Jenny, would he ever consider doing that.

I liked Oliver more than I ever thought I would. He was given all the gifts money and a famous name can provide but he remains a very sympathetic character. No wonder a sequel was made. The only flaw I found in this film was the cold actions of Oliver's father. He makes very little efforts to make amends with Oliver, even though Oiver became the very man he always wanted him to be. The only difference is that Oliver did it mostly on his own terms. Their conflict seems a bit forced for the sake of the story.

For the record, I was only bothered by Jenny’s swearing when she did it in church directly to the members of the children’s choir. Tacky!